0-2 in the Big Ten, Iowa looks to hang in league chase 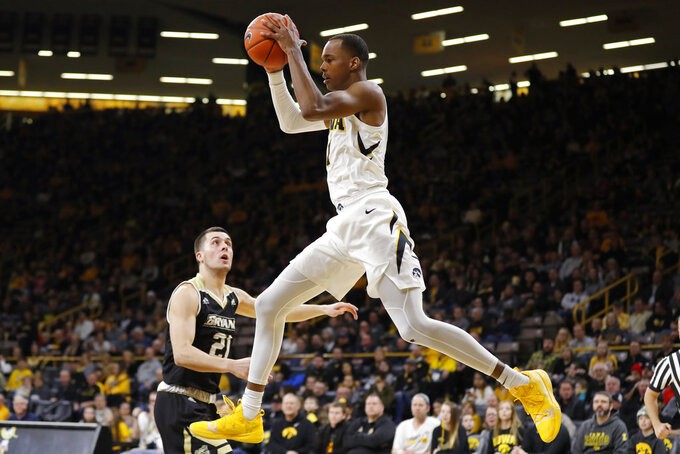 The 25th-ranked Hawkeyes also lost their first two Big Ten games, which essentially eliminated any margin for error in the conference race. It won't get any easier this week.

"Obviously we know our situation. It's a critical game," Iowa coach Fran McCaffery said. "We want to win a Big Ten championship. In order to do so, you've got to win Big Ten games."

Iowa has showed at times during the first two months of the season that it might have what it takes to make a run at a league title.

The biggest reason for Iowa's turnaround from a disastrous 2017-18 season, when it went just 4-14 in the Big Ten, has been the play of 6-foot-9 junior Tyler Cook. He flirted with going pro in the offseason before deciding that he needed to get better in order to have a shot at the NBA. He's done just that, scoring at least 15 points in seven straight games.

Iowa has leaned heavily on Cook during its current five-game winning streak, and he's responded with 19.2 points, 9.2 rebounds and 3.8 assists over that stretch. Cook has also shot 68.6 percent over his last five games while getting to the line 37 times, an indication that his aggressiveness in getting to the basket is paying off.

Cook's recent play has helped Iowa overcome the loss of sophomore center Luka Garza, who has missed the last two games with a sprained ankle.

"He came back with the right attitude. He's been at the gym religiously," McCaffery said of Cook. "A lot of guys talk about being great, but he wants to be great and he puts the time in. He's an intelligent person. He wants to be coached. But more importantly, he's a great teammate. So it's not like he's going out there saying 'OK, I'm just going to do what I have to do for myself.' He's an incredibly unselfish player."

Big Ten play tends to wears on even the deepest of teams and Cook's minutes are piling up. Forward Cordell Pemsl is out for the season after knee surgery and sophomore Jack Nunge is redshirting to help balance out Iowa's frontcourt depth for the next few years. That has put additional strain on Cook, who had to play all 40 minutes as Iowa struggled to put away Bryant on Saturday.

McCaffery said he isn't particularly concerned about leaning heavily on Cook, who he said is both in great shape and smart enough to avoid foul trouble.

"He's really worked hard on his body," McCaffery said. "His demeanor and his presence is exactly what we need."

Notes: McCaffery said Garza will attempt to return to practice on Wednesday and that his status remains a game-time decision.