From 2 wins to Sweet 16: Iowa St turnaround built on defense 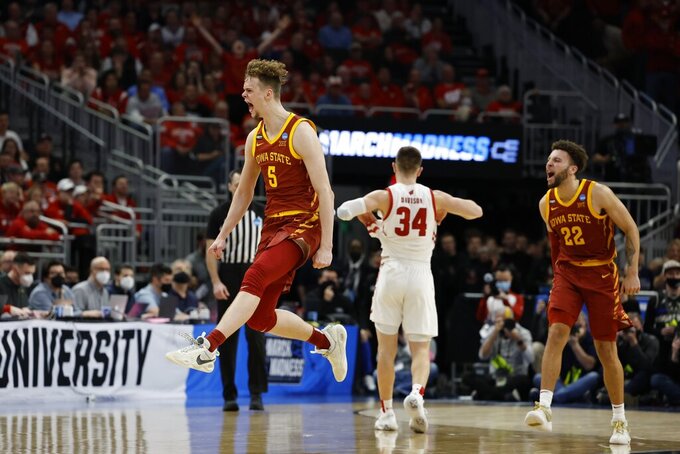 No one saw these Iowa State Cyclones coming, not after they won just two games and went 0-18 in the Big 12 last year.

For all the NCAA Sweet 16 storylines this year, save for Saint Peter's, there aren't any more compelling than the No. 11 seed that was picked last in the conference again in T.J. Otzelberger's first year back in Ames.

“Just to think of where we started in June, like a group that was so new to each other and just going out there with the object of turning things around, getting as many wins as we could... To end up here, it’s a blessing, man," star Izaiah Brockington said.

The Cyclones (22-12) will play another surprise team, No. 10 seed Miami, in the Midwest Region semifinal in Chicago on Friday. Their best chance to reach the Elite Eight for the first time since 2000 will be to muck it up again defensively like they did against LSU and Wisconsin.

Otzelberger said at his introductory news conference that strong defense would be the Cyclones' identity, not unlike that of Miami. His players have embraced it, finding as the season progressed that it's the best way to win for a team with a slow-paced offense that scores just under 66 points per game.

There was tepid response to the 44-year-old Otzelberger's hiring last March. He had twice been an assistant at Iowa State, and he had taken mid-major South Dakota State to the NCAA Tournament two of his three years as head coach. But he was 29-30 in two seasons at UNLV, and though the fans appreciated Otzelberger's loyalty to the cardinal and gold, some fans and media had hoped for a bigger name hire.

Otzelberger walked into a program that had bottomed out under Steve Prohm, having lost 43 of 57 games since going one-and-done in the 2019 NCAA Tournament.

He almost completely overhauled the roster. Seven of the top nine players in minutes played were not on the team last season, including all five starters.

Brockington transferred from Penn State, Gabe Kalscheur from Minnesota, Aljaz Kunc from Washington State and Robert Jones from Denver. The other starter is freshman Tyrese Hunter.

“We evaluated guys in the transfer portal and guys that would return and those we wanted to bring in,” Otzelberger said. “We wanted to make sure they knew what we were going to be about, they knew what they were signing up for, they knew what our identity would be. We believe that if you play hard defensively and you dictate that, you can control the game.”

The Cyclones started hot, winning 12 in a row for the second-best start in program history and beating tournament teams Memphis, Creighton and Iowa.

Iowa State tied for seventh in the Big 12 at 7-11 but beat Texas Tech and Texas in Ames, TCU on the road and played Kansas to within a point in Lawrence.

Brockington was named Big 12 newcomer of the year and Hunter the conference freshman of the year. The 20-win improvement marks the best turnaround in Big 12 history and best ever by a first-year head coach.

More eyeballs than ever are on the Cyclones now, and their defense-first mantra was on full display in their wins of 59-54 over LSU and 54-49 over Wisconsin, the Badgers' lowest point total since 2018.

The Cyclones set a school record for steals in an NCAA Tournament game with 15 against LSU, and they've forced 35 turnovers in two games. They've held LSU and Wisconsin to a combined 6-of-41 shooting on 3-pointers.

Hunter provided the offense against LSU, making seven 3s and finishing with a career-high 23 points. Kalscheur had 22 points against Wisconsin.

“I go back to these guys being very low ego, high-producing guys, they’re great teammates,” Otzelberger said. “So that’s important that you bring in the right type of guys so they know what they’re signing up for and they take pride in it. I think our guys understand how we do things.”