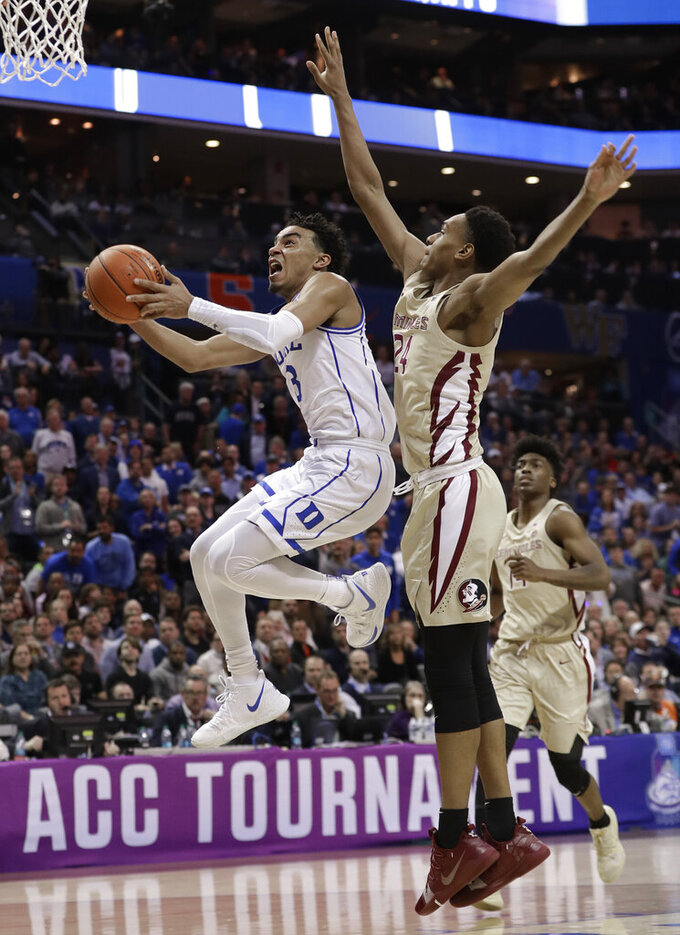 DURHAM, N.C. (AP) — Tre Jones considers himself the classic tagalong little brother, always wanting a piece of whatever his big brother had.

So when Tyus Jones won a national championship for Duke — well, Tre wanted one, too.

Four years after Tyus Jones ran the point as a freshman for a title-winning team of Blue Devils, Tre Jones takes his turn to chase a championship for a top-seeded Duke team.

And making it even more special for the Jones family is that baby brother is playing for a trip to the Final Four in Minneapolis — near the their hometown of Apple Valley, Minnesota, and where Tyus is in his fourth season with the NBA's Timberwolves.

But first the Blue Devils (29-5) have to win four NCAA Tournament games, starting Friday night in Columbia, South Carolina, in the first round of the East Region.

"We have a pretty good feeling what's coming," Tre Jones said. "The older guys have said the energy's crazy, the atmosphere's a lot of fun, but it's win or go home, and we know that. We all have the same goal in mind."

Tre had a front-row seat for his brother's title run — as a high school senior in 2015, he was in the crowd for each of Duke's six wins in that tournament — and that experience has fueled him ever since.

"I put out a goal for myself that I want to be in that moment one day," Tre Jones said. "And now that I'm here, that I'm in that moment, it's going to be fun to be able to partake in it."

Tre has been just as indispensable to this Duke team as his brother was to the program's last team to win a national title. Tyus Jones averaged 11.8 points and 5.6 assists during his only college season, and his two big 3-pointers in the title-game victory over Wisconsin earned him the Most Outstanding Player award at the Final Four.

Tre Jones leads the Atlantic Coast Conference and ranks fifth in Division I with an assist-turnover ratio of 3.49 and also has a league-best 171 assists. Though he's scoring 9.3 points per game, he reached double figures in all three games of the ACC Tournament, capping it with a season-high 18 points in a victory over Florida State in the title game.

"I'm excited for him, I'm excited for their team," Tyus Jones recently said. "I just told them to stick with it, take it one game at a time and kind of ride that momentum from the ACC Tournament to the (NCAA) tournament. And he's done a great job with the ups and downs of the season, of continuing to work, continuing to try to improve and learn on the fly. He's going to continue to do so in the tournament."

And just as Tre was along for the ride four years ago, the roles have reversed — thanks in part to the NBA's schedule.

The Timberwolves play Thursday night in Charlotte, roughly a 90-minute drive from the South Carolina arena where the Blue Devils will play their first NCAA Tournament games. Tyus said the family is making the trip to both places and, depending how things go for the Timberwolves this week, he said he might ask coach Ryan Saunders about sneaking down to catch his brother's postseason opener.

That would mean so much for the little brother who has spent his entire life trying to keep up with the bigger Jones.

"I always wanted to be there with him, wherever he went. Whatever he was doing, I wanted to do exactly what he was doing," Tre Jones said. "And I feel like that's part of the reason all of the comparisons don't really matter to me. Whatever he's done in basketball, or just life in general, I've always wanted to do. He's always set a great example for me, and always been a great role model for me, so with everything he's done in life, I've wanted to follow. And that's why I am where I am today, because he was able to do what he did first."