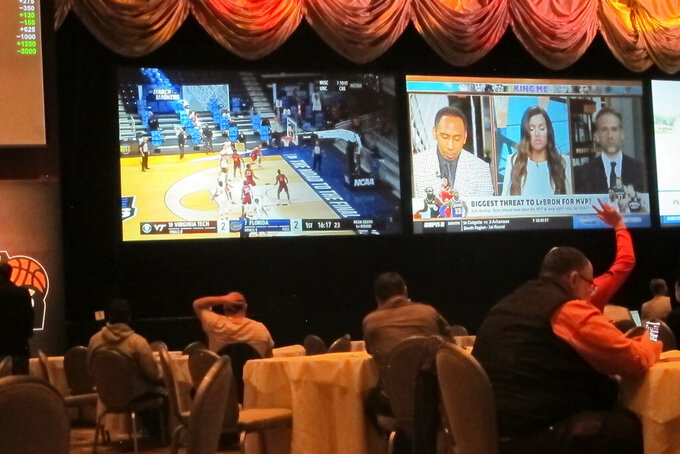 Customers watch a game in the NCAA basketball March Madness tournament on March 19, 2021, at the Borgata casino in Atlantic City, N.J. On March 13, 2022, the American Gaming Association predicted that 45 million Americans will bet on this year's tournament. (AP Photo/Wayne Parry)

ATLANTIC CITY, N.J. (AP) — About 45 million Americans say they plan to bet on this year's March Madness college basketball championship tournament, and an increasing percentage will do it in a way that doesn't include filling out brackets, according to the gambling industry's national trade group.

In a report released Sunday night, the American Gaming Association predicted that $3.1 billion will be wagered on this year's tournament, a figure that includes legal bets as well as those placed with illegal bookies or offshore web sites.

The report asserts that more than 17% of American adults will place at least one bet on the tournament.

“There’s no doubt this year will generate the highest legal handle in March Madness history,” said Bill Miller, the association's president and CEO, referring to the total amount wagered on the tournament.

The college championship tournament is one of sports betting's biggest events, but it still trails the level of betting seen in football's Super Bowl. While fewer Americans were expected to place bets on last month's Super Bowl won by the Los Angeles Rams (31 million), the amount expected to be wagered on the game was $7.6 billion, more than twice the amount forecast for the college basketball tournament, according to the association.

Nearly 21 million Americans say they plan to make bets that do not involve filling out brackets that predict the winner of each game up to and including the eventual champion, which has always been a popular method of betting on the tournament.

But 36.5 million will bet on a bracket in a pool or similar contest; there is some overlap among the two groups.

The report says more than three-quarters of the total amount bet on the tournament will not involve brackets, an increase of 55% from last year.

That is due in large part to the increasing number of states offering legal sports betting. Currently, 30 states plus Washington, D.C., offer it, and there are 29 million more American adults who live in states that have adopted legal sports betting since last year's March Madness tournament.