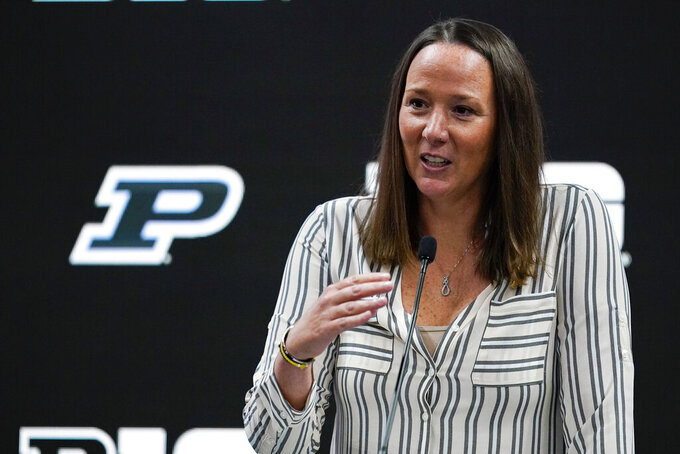 It was a short drive from their high schools and a little further from their college basketball days.

But now the three Big Ten new coaches find themselves preparing for their Division I coaching debuts.

“There’s a lot of work that’s got to be done," said Woodson, the longtime NBA coach and former Indiana star who took the Hoosiers job. “I don’t know if I have an advantage or not. I know I’m competing with a lot of great college coaches and a lot of great players."

Time will tell if Gearlds, Purdue's former star and hand-picked successor to Sharon Versyp, and Shrewsberry, the former Butler and Purdue assistant who takes over at Penn State, are the right fits.

This new coaching class has plenty in common. Four of the five are people of color. Johnson, like the three Indiana natives, also will be making his coaching debut next month and three of the five — Gearlds, Johnson and Woodson — are working at their alma maters as all five try to carve out a niche amid a formidable group of coaches.

“I’m still trying to figure out how in the world I’m following coach (Tom) Izzo and coach (Matt) Painter is behind me," Gearlds joked. “I figured they didn’t want anybody to go to the bathroom in between the break, so here I am."

Purdue hired Gearlds as associate head coach in May and intended to make her Versyp's replacement next season. Instead, Versyp retired in September, one month after the school's office of institutional equity began investigating allegations Versyp had created a “toxic and hostile environment.”

Woodson and his ties to former coach Bob Knight were warmly embraced in Bloomington. The Nittany Lions can finally turn the page on Patrick Chambers' resignation, which came after a former player accused Chambers of an inappropriate comment.

“Everything that comes at you at one time is a tough challenge, it’s a tough transition," Shrewsberry said. “But I’m learning each and every day. I’m learning with these guys back here what practice looks like. I change practice in the middle of practice based on how they feel."

Johnson and Moseley may face more daunting challenges, though.

Oft-injured center Eric Curry is the Gophers' only healthy returnee from last season though guard Payton Willis is back for his second stint with the team.

But Johnson can't wait to start the rebuilding process.

“I know I’m new to this, but I’m a kid that grew up watching it," he said. “I understand the tradition of the league, the coaches that have come through here, the players that have played here, the venues, the atmosphere, the whole nine (yards)."

Moseley, meanwhile, takes over a program that last posted a winning record in 2010-11 and hasn't reached the NCAA Tournament since 2009-10.

“I've had the opportunity to be part of several winning programs throughout my tenure, and I expect to bring that same mindset and winning culture here to Wisconsin," she said. “I think it’s no secret we haven’t had a ton of that in the last several years but we have a great winning tradition as far as our athletic department."

“We've got this great program, and we want people to know I’m going to be the head coach,” he said.

Painter said freshman forward Trey Kaufman-Renn has returned to practice after missing part of summer workouts because of a fractured right hand. He was injured during the two-game Indiana-Kentucky All-Star series but did not need surgery.

The 6-foot-9 Kaufman-Renn was the runner-up for last season's IndyStar Mr. Basketball Award.

Northwestern coach Chris Collins said freshman Brooks Barnhizer also has returned to practice after missing the entire summer with a broken foot that required surgery. The 6-6 guard was one of Indiana's top prep scorers last season at 32.7 points.

While most coaches and players chose conservatively dark or neutral-colored attire, Moseley and Indiana point guard Rob Phinisee brought some splash to the two-day event by dressing in school colors.

Phinisee wore a white suit with red shoes and a red handkerchief. Moseley opted for a white blazer, black pants and red shoes with heels.