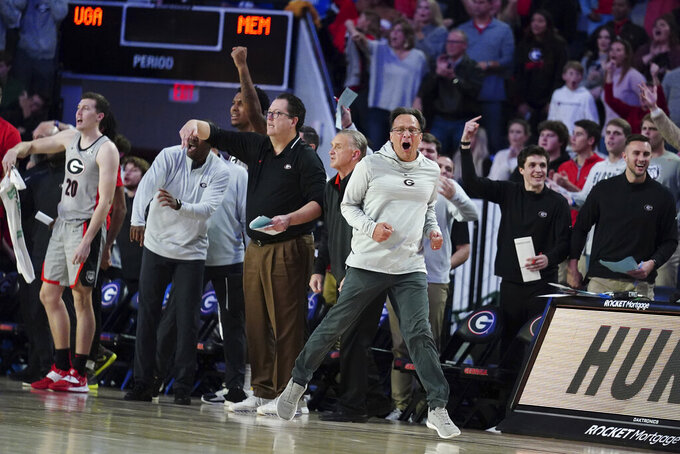 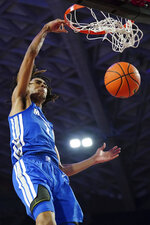 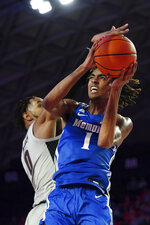 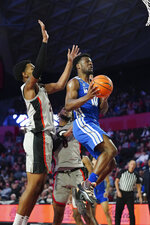 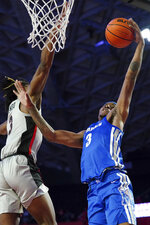 ATHENS, Ga. (AP) — A Memphis team that moved into the top 10 after opening the season with five wins suddenly is facing a mini-crisis following back-to-back losses.

Jabri Abdur-Rahim's 3-pointer with less than 2 minutes remaining gave Georgia the lead, and the Bulldogs snapped their four-game losing streak by beating No. 18 Memphis 82-79 on Wednesday night.

“At the end of the day, it shouldn't have got to that,” Memphis center Jalen Duren said of the late-game developments.

“This was a team we were supposed to beat, I think we're good enough to beat. We just didn't take care of business."

The 3-pointer by Abdur-Rahim, who scored 15 points, gave the Bulldogs a 78-77 lead over the Tigers, who led most of the second half. Kario Oquendo, who scored a game-high 24 points, followed with a steal and jam that extended the lead to three points.

“It was a different type of energy tonight,” Oquendo said. “Nobody wanted to lose again. ... I feel this is the hardest we’ve played all season. We’ve just got to piggyback off that and keep going.”

Following a missed free throw by Landers Nolley II of Memphis, Georgia's Jailyn Ingram made one of two free throws for an 81-77 lead. A jam by Nolley, who led the Tigers with 17 points, cut the lead to two points.

Following Christian Wright's free throw, which pushed Georgia's lead to three points, Memphis was left with 4.5 seconds to set up a possible tying 3-pointer. Emoni Bates' heave from just past midcourt bounced off the rim.

“We've got to get back to work,” Duren said, adding the message from coach Penny Hardaway was, 'We've got to stay locked in. It's a long season.'”

Abdur-Rahim has scored a combined 35 points in the last two games after struggling with his shot early in the season. He was held to a combined 25 points in Georgia's first six games.

“We always had confidence in Jabri,” Oquendo said. “Once he saw a couple of shots go in, we knew he was going to keep it going. .. He’s a great player.”

Alex Lomax had 14 points for Memphis.

The Bulldogs took a big lead at 28-21. The Tigers' defensive pressure eventually turned the momentum, and Memphis led 34-32 at halftime.

Georgia committed 13 turnovers, including 11 in the first half.

Fouls were an issue for Memphis. Duren and DeAndre Williams fouled out. Georgia outscored the Tigers 27-14 at the free-throw line.

Memphis: Freshman Emoni Bates, who had 11 points, was assertive in the closing minutes, clearly showing no fear of taking the most important shots. He scored back-to-back baskets in one stretch. Ultimately, the Tigers couldn't take advantage of their superior size.

Georgia: The Bulldogs were without starting point guard Aaron Cook, who was held out with an illness. Etter, a junior, made his first career start. Cook is the Bulldogs' second-leading scorer, but the absence of his floor leadership was difficult to overcome in the first half. Wright, who had 17 points, helped fill the void.

Georgia coach Tom Crean, the former Marquette and Indiana coach, earned his 400th career win. He gave credit to the fans. The attendance was 7,147.

“They were there in force, and it will get even better,” Crean said. “I told our guys, ‘You keep showing the way you can play. We’ll have the upper deck filled again here pretty quick too.’”

Memphis: The Tigers will play their second of four games against Southeastern Conference opponents in a stretch of 18 days when they play at Mississippi on Saturday.

Georgia: The Bulldogs will continue their stretch of six consecutive home games in December when they face Jacksonville on Tuesday.