Abilene Christian coach will be busting from seams vs UK 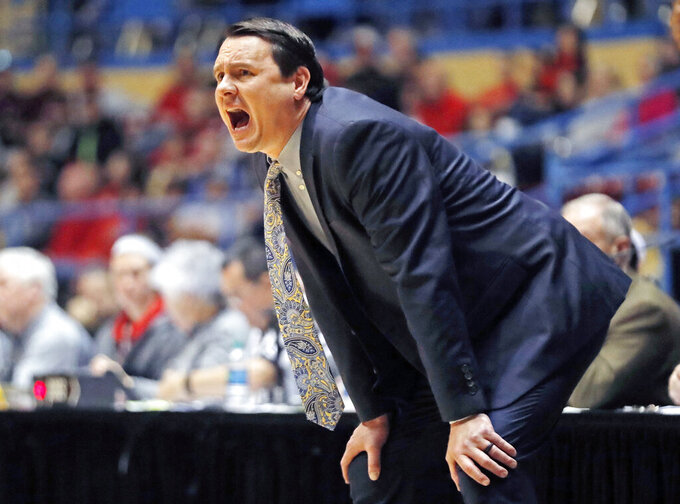 FILE - In this Dec. 15, 2018, file photo, Abilene Christian coach Joe Golding yells out at his players during the first half of an NCAA college basketball game against Texas Tech in Lubbock, Texas. Golding hopes his team holds up better than his suit in the NCAA Tournament. He ripped his pants celebrating Abilene Christian's seeding Sunday night and wasn't able to get them repaired before leaving for Jacksonville, where the 15th-seeded Wildcats will face second-seeded Kentucky in the opening round Thursday. (AP Photo/Brad Tollefson, File)

JACKSONVILLE, Fla. (AP) — Joe Golding hopes his team holds up better than his suit in the NCAA Tournament.

Golding ripped his pants celebrating Abilene Christian's seeding Sunday night and wasn't able to get them repaired before leaving for Jacksonville, where the 15th-seeded Wildcats will face second-seeded Kentucky in the opening round Thursday.

The 43-year-old coach considered buying a new suit with his postseason bonus money, but learned he won't see that money until June. So he's sticking with the one he has and giving new meaning to the phrase "Let 'er rip."

"I'm coaching them all in my baby blue suit, and I'm going to have a hole in my butt, man," Golding said. "It is what it is, man. We're going to be who we are and go out there and embrace it."

An embrace is what started this fashion faux pas.

Golding shared a lengthy hug with longtime assistant Brette Tanner, causing his pants to split. It wasn't much of a problem at the time since he was mostly surrounded by family, friends and team members.

It could be more of an issue on national television Thursday night.

"I heard somebody was going to start a GoFundMe page," Golding quipped. "I would appreciate it. Any help I can get."

Maybe Kentucky coach John Calipari can help him out. After all, Calipari is college basketball's highest-paid coach, making more than $9.2 million annually, and has a closet full of designer suits.

Golding probably makes a fraction of that, and fashion doesn't seem be his strong suit. Apparently his options are limited in Abilene, Texas.

He had an extra suit earlier in the season, but left it at the airport while traveling to play Nicholls State in mid-February. He rushed to a nearby store and bought khaki pants and a shirt to wear on the sideline.

Since then, he's been a one-suit guy.

He might be a little superstitious, too, since Abilene Christian has won six in a row and eight of nine.

And it's a longshot that the Southland Conference champion Wildcats (27-6) are tailor-made to upset Kentucky (27-6) — but it's still a shot.

"We could play Kentucky, I don't know, 10,000 times, we might win once," Golding said. "But that's March Madness. That's what (Thursday) night's about. If we can find a way to keep this thing close and give ourselves a chance the last 10 minutes, you never know. That's when the madness happens."

Especially considering Golding will be without two of his top five players, Jalone Friday and B.J. Maxwell.

Golding dismissed Friday and Maxwell in late February for "violating university policies and behavior inconsistent with the values of the university." Friday was the team's second-leading scorer, averaging 13.1 points. Maxwell was averaging 9.2 points and 4.7 rebounds.

Golding said the tough decision was a valuable lesson for his own children.

Maybe Golding will eventually be able to say the same about a new suit.