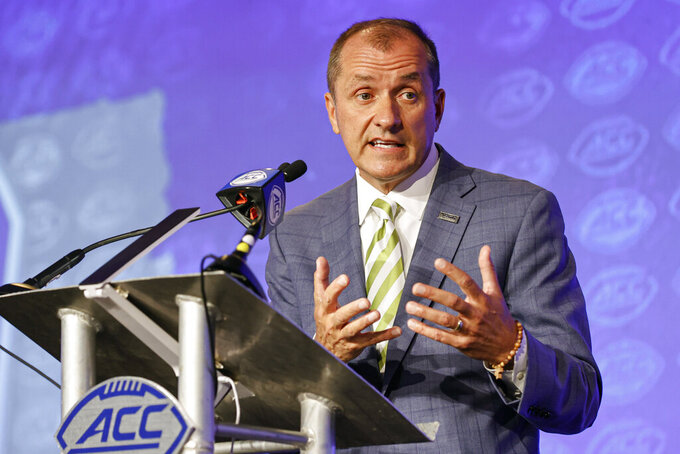 Phillips said Wednesday at the ACC Tipoff that “it's time to look at” expanding the field beyond the 68 teams currently invited to the Big Dance each March.

Phillips believes the NCAA's best tournaments are the ones that feature the most schools. That's part of why he's hopeful of eventual expansion, not just for the men's event but for all NCAA championships.

Increasing the field also brings rewards for those “schools that are spending a tremendous amount of resources in sports and not having a chance to access those championships,” he said.

Currently, just 68 of 358 men's basketball programs qualify for the men's NCAAs — 32 conference champions and 36 at-large teams picked by the selection committee. Phillips said the logistics of staging a bigger tournament need to be worked out.

Syracuse coach Jim Boeheim has advocated for more teams in the field the past 30 years. “I've been knocked down every year I've brought it up,” said the 77-year-old Boeheim. “I stopped bringing it up. Everybody thought I was an idiot.”

Notre Dame coach Mike Brey projects adding three more First Four pods — one for each region — could work and take the field up to 80.

“Let's throw three more Daytons in, regionalize it up and play it out, let some more kids get in there," Brey said.

Florida State coach Leonard Hamilton wants to double the field — and double the experience for athletes who work hard all year for their moment in March. “Do you realize how it would be an opportunity for all these youngsters to participate in the NCAA Tournament?" he said. “It's the greatest games in history."

North Carolina's Armando Bacot could've easily jumped to the NBA, especially after leading the Tar Heels to the NCAA championship game last season. Instead, the 6-foot-11 senior wanted another run to finish the job.

Bacot, a likely pick for ACC preseason player of the year, was among four Tar Heels who held off going pro in the wake of their 72-69 title-game loss to Kansas in the NCAA Tournament in April. North Carolina was up 40-25 at halftime before the Jayhawks' rallied.

For Bacot, it was a difficult outcome that fueled his decision to return. He doesn't spend much time thinking about the NBA, concentrating on improving his game and helping the Tar Heels win.

“Going through last year with our ups and downs,” Bacot said. “Our ups were really high and a lot of fun. Just being able to experience that for a full year was a no-brainer.”

The secret? Don't change anything. “We all know what's at stake,” Young said. “Let's go have a good time, lay our ears back and let it rip.”

Whitehead is a 6-foot-7 forward from Newark, New Jersey, who was rated the country's No. 2 prospect by ESPN this past recruiting season.

Whitehead is entering the next phase of his recovery where he's able to get out on the court more, Scheyer said. The first-year coach can't yet say when Whitehead will be ready to play, “but he's progressing in a great way and he’s working hard, and I know he’s anxious to be out here with these guys practicing every day.”

Georgia Tech coach Josh Pastner is excited about — well, everything.

He thinks the ACC is deep and great. His players are smart and hardworking. And his school is a leader in the space industry.

“They found water on Mars from Georgia Tech,” said Pastner, bragging on 14 Tech grads who've been to space. “That’s what’s amazing about this school. It’s incredible.”

Pastner gushed that he thinks North Carolina should be ranked No. 1 nationally to start the season. He also would pick Virginia as the league's best team. “I know it sounds crazy when I say this,” said Pastner, opening his seventh year with the Yellow Jackets.