After Hurricane Dorian, a layup helped the Bahamas rebuild 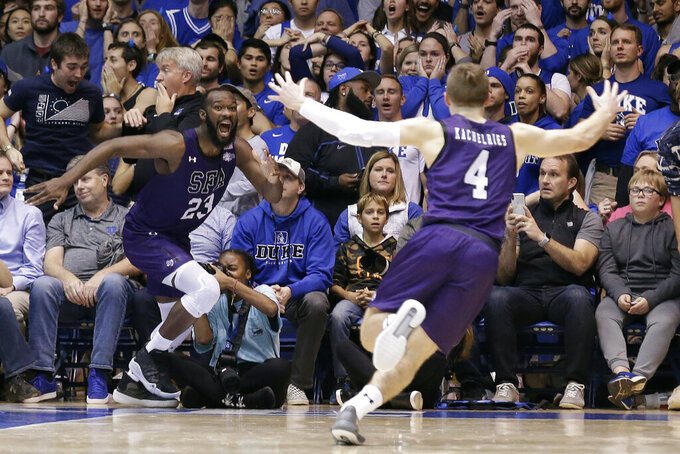 FILE - Stephen F. Austin forward Nathan Bain (23), of the Bahamas, and guard David Kachelries (4) celebrate Bain's game-winning basket against Duke in overtime of an NCAA college basketball game in Durham, N.C., in this Tuesday, Nov. 26, 2019, file photo. Bain provided one of college basketball’s signature moments last season, a buzzer-beating layup in overtime to give unheralded Stephen F. Austin a stunning upset over Duke. But that became just a sliver of the story that night. His layup won a game -- and rebuilt a home, rebuilt a school and rebuilt a church, all of it directly impacting the lives of hundreds of Bahamians who have dealt with enormous challenges for the last 14 months and counting. (AP Photo/Gerry Broome, File)

The newly rebuilt Tabernacle Baptist Church in Freeport, Bahamas, doesn’t see as many parishioners as it would in normal times, simply because coronavirus concerns keep a number of them from venturing too far from home. So these days, the church arranges delivery of groceries, care packages, health supplies and more to those in need.

Strangers made that possible.

And it all started with a layup.

Nathan Bain provided one of college basketball’s signature moments last season, a buzzer-beating layup in overtime to give unheralded Stephen F. Austin a stunning upset over Duke on Nov. 26. 2019. Duke was the No. 1 team in the country at the time and hadn’t lost a nonconference game on its home floor in nearly 20 years.

But that became just a sliver of the story that night. Bain's layup won a game — and rebuilt a home, rebuilt a school and rebuilt a church, all of it directly impacting the lives of hundreds of Bahamians.

“It was a game and it became a bigger cause,” Bain said. “More often than not, people want to do the right thing. And I think that’s what happened with us, that people just saw the opportunity to be good human beings.”

Bain’s family home in the Bahamas was destroyed when Hurricane Dorian slammed into the islands on Sept. 1, 2019, with wind reaching 185 mph. Their belongings were washed away. The church and school that his father has operated for decades were badly damaged. School officials at Stephen F. Austin had set up an online fundraiser to help Bain’s family; it raised $2,400 in the two months preceding the win over Duke.

“A lot of people at home lost everything, lost their lives, lost family members, lost their whole life savings,” Bain said. “People had to start over from zero like they were newborns.”

Bain gave the money to his parents, who oversaw the rebuilding effort of both the church and their home. The house has been habitable since July. The church has been up and running since April.

“Without these people, there’d be no way in the world that we’d be back in our church building,” said Norris Bain, Nathan’s father. “We would still be working on the how to get that completed.”

No need, thanks to that layup.

On the day that Stephen F. Austin was playing Duke, the first international flight to Grand Bahama since the hurricane touched down. Its passengers: basketball teams from Tennessee, who came to the Bahamas for a tournament that Norris Bain organized, a first step toward normalcy for a nation that suffered more than $3 billion in damage and lost at least 74 people in the storm.

Hours after that plane landed, a loose ball just happened to roll into the hands of Nathan Bain.

“Definitely some divine intervention,” Norris Bain said. “The ball ends up in the hands of the kid who has a story to tell about a country ravaged by a storm, the type of a storm that has not been seen since the creation of this world.”

Nathan Bain is working in Texas and planning his wedding these days. He hasn’t been home to see the rebuilding. He didn’t have time to go back last season and then the pandemic struck and made international travel difficult. He couldn’t even keep his photos of the devastation; they upset him so much that he had to delete them from his phone.

“You’re going to hinder your faith when you ask questions you know you don’t have an answer to because you’re just going to keep on asking, ‘Why, why, why?’” Nathan Bain said. “There’s a process for things. Sometimes, you just have to understand there’s a bigger plan.”

And sometimes, a layup is worth much more than two points.

“One Good Thing” is a series that highlights individuals whose actions provide glimmers of joy in hard times — stories of people who find a way to make a difference, no matter how small. Read the collection of stories at https://apnews.com/hub/one-good-thing