After long year, Virginia gets chance at NCAA redemption 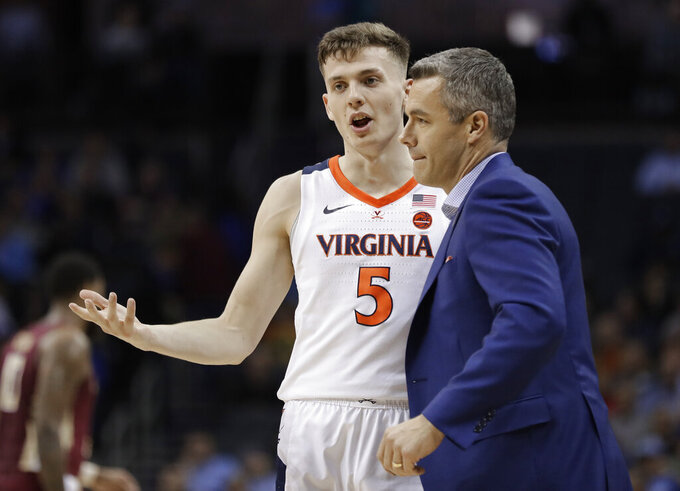 COLUMBIA, S.C. (AP) — Virginia has watched the motivational pick-me-up videos. The players have relived the loss when they are too tired to do one more drill at practice. And the Cavaliers have finally answered the last question about being the first No. 1 seed to lose in a NCAA Tournament game before getting a chance to redeem themselves.

On Friday, 370 days after the stunning 20-point loss to UMBC, Virginia (29-3) gets to take the court again as a top seed, this time against Gardner-Webb.

"We're ready to put on a show so we can talk about something else," junior guard Kyle Guy said.

Virginia coach Tony Bennett's rehabilitation plan started with a motivational video about how a setback can open the door for something greater. "If you learn to use it right, it can buy a ticket to a place that you couldn't have gone any other way," Bennett said.

Kyle and his teammates used the loss as motivation anytime a practice seemed too tough.

"Whenever somebody is tired or you're trying to fight through a rep or take a play off or something, I always think back to that," Guy said.

The draw did Virginia as few favors as a No. 1 seed can get. Gardner-Webb is the best of the 16th seeds, according to the NCAA's NET rankings, and won on the road at both Georgia Tech and Wake Forest.

The Runnin' Bulldogs (23-11) beat the No. 1 and the No. 2 seeds in the Big South Tournament on their home floors to get to their first ever NCAA Tournament.

In their first practice after winning the conference tournament, Gardner-Webb coach Tim Craft showed his team clips of the great NCAA Tournament upsets of the past 20 years, including that UMBC win.

"Hey, anything can happen in this tournament. That's why this tournament is great. Let's get focused on preparing to play the best we can play," Craft said.

Tennessee coach Rick Barnes is heading to his 24th NCAA Tournament. Colgate (24-10) is playing in its third tournament ever and first since 1996.

But while the No. 2 seed Volunteers (29-5) have experience, it hasn't been all that good. Tennessee lost in the second round last year to eventual Final Four team Loyola-Chicago.

Colgate coach Matt Langel is familiar with famous 2/15 upsets like Santa Clara over Arizona in 1993, Coppin State over South Carolina in 1997, and the most recent one — Middle Tennessee State over Michigan State in 2016. But Langel said he isn't emphasizing that.

"You're balancing enjoying the moment with getting yourself ready to play the best you've ever played," Langel said.

Kansas State (25-8) will be without a key piece when the fourth-seeded Wildcats take on No. 13 seed UC Irvine (30-5) in San Jose, California.

Forward Dean Wade will miss the game with a lingering foot injury that also sidelined him for the Big 12 tournament. Wade tweaked the foot several times down the stretch and hasn't played since hurting it in the regular season finale against Oklahoma.

Wisconsin and Oregon are both back in the tournament after rare absences a year ago.

Wisconsin had made 19 straight tournament trips with three appearances in the Final Four and one in the title game before a disappointing 15-18 season a year ago. The Badgers rebounded behind star big man Ethan Happ, who returned for his fifth year, to finish fourth in the Big Ten and make it back to the tournament this season.

The 8/9 game in the South region matches up a couple of teams that stumbled into the tournament.

No. 8 Mississippi (20-12) lost five of its last seven, while ninth-seeded Oklahoma (19-13) lost eight of its last 12 games. Both lost their conference tournament openers.

Ole Miss is returning to the tournament in Davis' first season for the first time since 2015. The Sooners have been three times in the past four years, including a Final Four appearance in 2016.

Oklahoma coach Lon Kruger said Jamuni McNease, who has dealt with nagging foot and ankle injuries practiced at full speed this week for the first time in a long time.

Where Virginia ends up in the NCAA bracket, upsets follow.

In the past five years, a seven seed or worse has won the Cavaliers region. Last season it was No. 11 Loyola-Chicago.

Virginia has been a No. 1 seed in four of its past six NCAAs.

The journey to the NCAA Tournament has been such a whirlwind that Iowa forward Nicholas Baer confused where he was with who he was playing.

Baer said he and the Hawkeyes were "really looking forward to this opportunity to play in Cincinnati, and hope we'll be here for a while."

A reported said: "It's Columbus, you knew that?"

Baer recovered: "I did know that."

The Hawkeyes (22-11) do play Cincinnati (28-6) in the first round, though, on Friday afternoon at Nationwide Arena in Ohio's capital city.

Josh Dubow in San Jose, California, and Joe Kay and Mitch Stacy in Columbus, Ohio, contributed to this report.