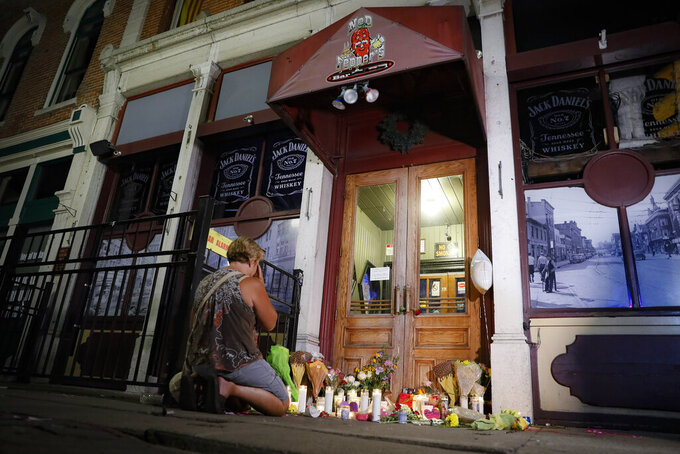 FILE—In this file photo from Aug. 4, 2019, mourners visit a makeshift memorial outside Ned Peppers bar following a vigil at the scene of the mass shooting in Dayton, Ohio. Trey Landers, a Dayton native and senior guard on the University of Dayton basketball team was there when a masked gunman in body armor opened fire early that Sunday. He has now helped his basketball team to its best start ever at 26-2 and to No. 4 in the current Associated Press poll, its highest ranking in 64 years. (AP Photo/John Minchillo, File)

DAYTON, Ohio (AP) — Trey Landers survived one of his hometown's worst moments. Now he's contributing to one of its best.

A Dayton native, the senior guard has helped lead the University of Dayton basketball team to its best start ever at 27-2 and to No. 4 in the current Associated Press poll, its highest ranking in 64 years.

Nearly seven months earlier, though, he was running out of the back of a Dayton bar as a gunman approached with an an assault-type weapon.

People greet or email to “just thank me and my teammates for everything we're doing right now,” Landers said. “Our team is helping pull the city together a little bit. ... It's bigger than us.”

Dayton has been struggling for decades, its current population of some 140,000 down from nearly double that in 1960. Its signature company, NCR, moved to Georgia, a nearby General Motors plant closed, and in recent years, the opioid crisis hit hard.

And then came 2019, what Mayor Nan Whaley calls “a helluva year.” Tensions were high around a Ku Klux Klan rally downtown in May, followed by devastating tornadoes.

And in the early morning on Aug. 4, a gunman opened fire in the city's Oregon entertainment district. He killed nine people in 32 seconds before police shot and killed him, stopping him from getting into the crowded Ned Peppers nightclub.

Landers had arrived there with two friends just minutes earlier. They heard the volley of gunshots, and a panicked mass rushed into the club's rear where they were. Landers ran out and hopped a fence.

“It's hard to run it back,” said Landers. “It's a visual picture that will always be in my head. You can't unsee some of that stuff."

It also evoked a traumatic childhood memory, the loss of his father, Robert, who was fatally shot outside a shop in Dayton in a still-unsolved case. “I was about 8 years old, so I was aware ... so it makes you think, it brings a lot of questions.”

Landers called his coach, Anthony Grant, and other people close to him to talk through his feelings. He soon refocused on basketball, the game and his teammates helping him cope.

As the city started a healing process, Whaley, a UD alum, adopted a slogan: “We're going to get through the winter with the Flyers.”

Unranked to start the season, the team won its first six games before losing in overtime to a heralded Kansas team. An overtime loss to Colorado has been followed by an 18-game winning streak.

The Flyers clinched the Atlantic 10 title with an 82-67 victory over Davidson on Friday night at UD Arena, a chance for the city to celebrate after its challenges.

“We go out and play for Dayton every single day,” said Obi Toppin, who had 23 points and 12 rebounds in the clinching win. “They had two tragedies that push us to work harder every day.”

With no major-league-level pro sports teams in Dayton, the Flyers have long been popular in the city, which annually hosts the “First Four” games to begin the NCAA Tournament. A record 14 sellouts this season of the 13,409-seat arena have helped keep the Flyers fired up.

“You have to give it to the fan base,” Duquesne Coach Keith Dambrot said after an 80-70 Feb. 22 loss at Dayton. “Those are some of the best fans in the country."

Grant, who returned to Dayton three years ago as head coach after playing for the Flyers three decades ago, said the coaches have talked to players “about the joy you could bring to others, whether it's because of the events that hit our community, or maybe it's just someone who's going through tough times.”

“It's always been a love affair with the city, community and Flyers,” he said.

Arthur Jipson, a UD sociology professor, likes to wear school gear around town, drawing shouts of “Go Flyers,” high-fives and even renditions of the school song.

“It's really exciting,” Jipson said. “People have been through a lot, but they see the Flyers doing well as a way to feel good, as a way to feel some wonderful things are happening in our community.”

As a Democrat who riled Republican President Donald Trump during his post-shooting visit to Dayton, Whaley is used to sparking criticism on social media. But her recent post of a Dayton Daily News story about the Flyers drew no trolls, just likes and shares.

“Nobody has anything bad to say about the Flyers,” she said Tuesday evening at the Oregon Express, just down the street from the shooting site.

Dayton native John Botts, 72, shook his head Tuesday as he stood outside another bar in the Oregon district.

“I can't say that it's helped us to forget,” Botts said. “I still think about that a lot."

But, he agreed — the Flyers are lifting spirits, and he's begun following the team closely.

“One of the common themes is how Dayton kept making national news for not-so-good reasons,” she said. “I think it (basketball) really gives everyone something common to rally around that's positive."

A year after going 21-12 and losing in the first round of college basketball's second-tier tournament, the Flyers are seeking some March magic in the big dance this time around.

“This team is special," Landers said. "They’re proud of what we’re doing, and we just want to continue to make them proud.”