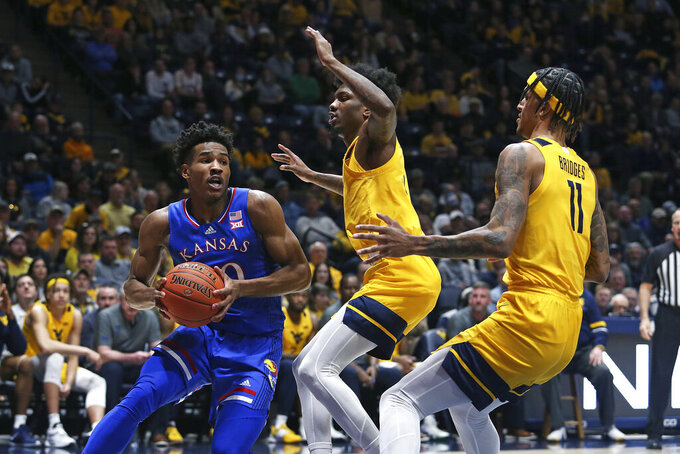 MORGANTOWN, W.Va. (AP) — Kansas enters the final two weeks before the Big 12 Tournament in control of its own chances to earn at least a share of its 20th regular-season championship.

There's still time to clean up the glitches that keep the sixth-ranked Jayhawks from winning some games decisively.

The Jayhawks (22-4, 11-2) maintained their two-game lead in the Big 12 over No. 7 Baylor and No. 11 Texas Tech with five games remaining before the conference tournament.

“We can see the finish line now,” coach Bill Self said. “The only reason we need help is if we don’t take care of business. So, I told our guys that right before we played and they took care of business.”

Kansas had a 49-32 rebounding advantage but committed 15 turnovers that allowed West Virginia to keep it close most of the way.

“Sometimes we just have mental lapses and make bonehead mistakes, but when the game is on the line we have to make sure we lock in,” McCormack said.

“I was thinking about, instead of shooting a layup, just turn around, throw it back out and let a guy shoot a 3," West Virginia coach Bob Huggins said. "At the end of the day, that probably would be more fruitful for us than having guys continue to miss layups.

“I've been doing this a long time. I've never seen anything like it.”

Gabe Osabuohien, West Virginia’s top defender, returned from a one-game benching after picked up three technical fouls in two previous games, including an ejection. Less than a minute after he entered Saturday, Osabuohien took a charge on Mitch Lightfoot.

But the Mountaineers couldn’t do much to stop Agbaji, the Big 12’s leading scorer who had a 3-pointer and a layup during a 9-0 run that gave the Jayhawks a 42-30 lead with 17:11 remaining.

Kansas followed that with a more than four-minute scoring drought. Sean McNeil hit two 3-pointers and Taz Sherman one during a 13-point West Virginia burst that cut the deficit to 44-43 with 12:39 left. But the Mountaineers never retook a lead they only held early in the game.

“Just in timeouts, any huddles we had during the game, I just told the guys to keep their composure," Agbaji said. "They’re going to make their runs. It’s a game of runs. They’re obviously playing at home, they got the crowd. Just stay in it and keep playing our game.”

McCormick made layups less than a minute apart, sank two free throws and Kansas pushed its lead back to 60-48 with 5:11 left.

West Virginia was limited to two field goals over the final eight minutes. McNeil led the Mountaineers with 18 points and Sherman, second in the Big 12 to Agbaji in scoring, added 16.

Christian Braun added 10 points and he and Jalen Wilson had 11 rebounds for Kansas, which won in Morgantown for the fourth time in 10 tries under Self.

Kansas: In late February, it’s all about staying healthy and gaining momentum toward tournament time, and Kansas has won three straight. But there are plenty of challenges left, including a trip to Baylor next Saturday.

West Virginia: The week wasn’t a total loss for the Mountaineers, whose only representation at the NCAA Tournament could be Huggins. He was announced Friday among the finalists for the Naismith Memorial Basketball Hall of Fame. The class of 2022 will be announced at the Final Four on April 2 in New Orleans.

Huggins seems to think his team still has a chance to make the Big Dance.

Kansas: Hosts rival Kansas State on Tuesday. The Jayhawks won 78-75 on the road in their earlier meeting.

West Virginia: Travels to TCU on Monday in a makeup of a Jan. 3 game that was postponed due to COVID-19 protocols within the Horned Frogs’ program. The Mountaineers will play three games in six days.