Agbaji passes Chamberlain in No. 5 Kansas win over K-State 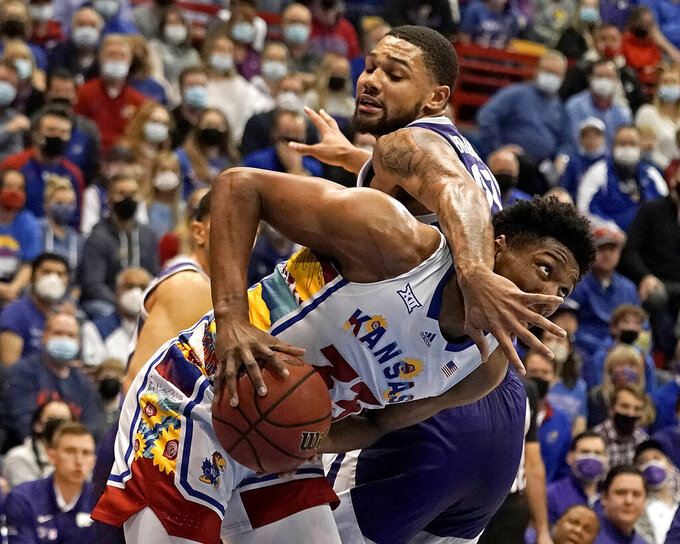 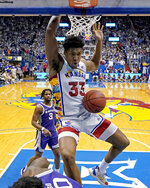 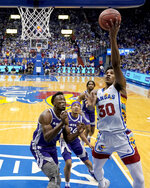 “I didn’t know that,” Agbaji said when asked about his milestone in the postgame. “That’s an honor, big time.”

Kansas coach Bill Self was asked if the margin of victory gave his team confidence and momentum.

“It was a good game. The game had more pace to it than probably any game we’ve played this year.”

Kansas is 203-94 all-time against Kansas State. The 203 victories are the most by any school over any opponent in NCAA Division I history. Oregon State’s 193 wins over Oregon ranks second.

Markquis Nowell scored 20 points, Nijel Pack, Selton Miguel and Mike McGuirl each had 13, and Mark Smith added 11 for Kansas State (14-13, 6-9), which finished a point shy of its season high.

“I think K-State did a lot to force the (pace),” Self said. “They did some things we hadn’t seen before.”

Kansas maintained its 1½-game lead in the Big 12 Conference over Baylor and Texas Tech. The Jayhawks will face Baylor on Saturday in Waco, Texas.

Kansas, which had to overcome a 17-point deficit in the second half of their victory in Manhattan in January, didn’t have to mount any comeback Tuesday. The Jayhawks scored the first bucket of the second half and their lead never dipped into single digits.

“It’s always fun to play against them,” Braun said. “We always enjoy the rivalry.”

K-State stayed close early with 3-point shooting, connecting on 3 of 7 early on, including two straight by McGuirl. But Kansas used a quick 6-0 run to take an 18-13 lead.

Agbaji’s 15 points in the first half led the Jayhawks. K-State was led by Pack and Nowell with 11 points apiece in the opening half.

Kansas State: The Wildcats probably need to win three of their next four games to reach the NCAA Tournament. They have home games against Iowa State and Oklahoma, sandwiched around a road game against No. 9 Texas Tech prior to their opening game in the Big 12 Tournament.

Kansas: Bill Self still owns the state of Kansas in basketball. He’s now 39-6 all-time against his rivals from Manhattan, Kansas, including 18-1 in Allen Fieldhouse.

Kansas: Travels to Waco, Texas, on Saturday to play No. 10 Baylor.