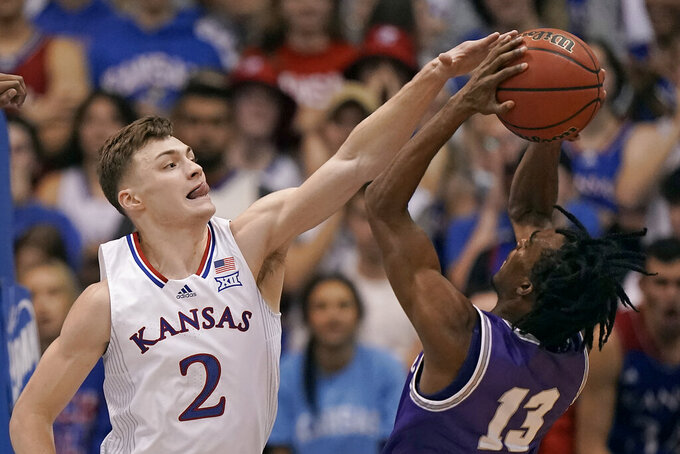 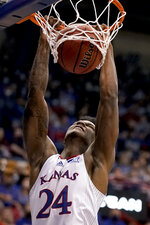 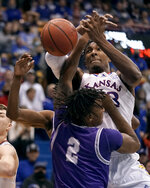 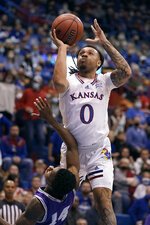 LAWRENCE, Kan. (AP) — Just about everything was back to normal for Kansas inside Allen Fieldhouse on Friday night.

Bill Self excoriated the officials for every perceived miscue. The vocal student section razzed Tarleton every time the Texans missed a shot. The Jayhawks executed their familiar ally-oop dunk out of a timeout. And by the time the game drew to a close, the crowd began the haunting refrain of “Rooock. Chaaalk. Jaaayhaaawk.”

Oh, and the third-ranked Jayhawks cruised to an 88-62 victory — their 49th consecutive in a home opener.

“I actually thought we played pretty well,” said Jayhawks coach Bill Self, whose team cruised past Michigan State in the Champions Classic on Tuesday night. “They play so hard up underneath you and play a different style game.

"The game went exactly how I thought it would go.”

Ochai Agbaji scored 25 points, Christian Braun had 15, Remy Martin added 14 and Jalen Coleman-Lands 10 for the Jayhawks (2-0), who led just 63-50 with about 6 1/2 minutes left before pulling away down the stretch.

“We're building,” said Braun, who also had eight rebounds, five assists and five blocks. That was a good challenge for us because it’s something we hadn't seen before and we're just going to go from there."

Shamir Bogues had 20 points and Montre Gipson had 19 for the Texans (0-2), who were supposed to play Kansas last season but had the trip scuttled by a COVID-19 outbreak. It was the first of six straight games that Tarleton had canceled or postponed, keeping the Texans off the court for an entire month.

Kansas allowed about 2,000 fans for most home games last season, when many schools across the country were playing in front of empty stands. But Friday night was the first time in nearly two years the Phog was filled to the rafters.

“This atmosphere is like no other,” said Coleman-Lands, a transfer from Big 12 rival Iowa State. “Last year wasn't an authentic college experience. Even if it wasn't sold out tonight, it was electric out there.”

Tarleton didn't make it an easy night, though.

When the Jayhawks pressed their lead to 25-12 on back-to-back baskets by Agbaji, the small WAC school — playing just its second season of Division I basketball — ripped off nine straight to get back into the game. And when Kansas stretched the lead again to 33-22 late in the first half, Gipson went on a personal 7-0 run to claw the Texans right back.

They trailed 39-31 at the break; Gipson and Bogues had all but two of their points.

They hung around most of the second half, closing within 63-50 on Javontae Hopkins' basket with 6 1/2 minutes to go. But Dajuan Harris Jr. answered at the other end, Agbaji his second 3-pointer and David McCormack threw down a dunk as the lead hit 20 points for the first time and the Jayhawks began to pull away.

“We know that game, we’re supposed to step it up,” Kansas freshman Bobby Pettiford said. “We talked in the locker room and the second half we brought it.”

Tarleton, a longtime Division II powerhouse, certainly isn't afraid of playing anyone. Billy Gillispie — who was not made available after the game — also scheduled sixth-ranked Michigan and No. 1 Gonzaga before December rolls around. Despite how the Texans fare, that experience should prove invaluable by the time league play begins.

Kansas had a 41-25 rebounding advantage but struggled to outscore the Texans in the paint, even though the small school from Stephenville, Texas, started nobody taller than 6-foot-6. In fact, Tarleton finished with a 13-9 edge on second-chance points, so there is plenty of room for the Jayhawks to improve.

The Jayhawks play Stony Brook on Thursday before heading to the ESPN Events Invitational.