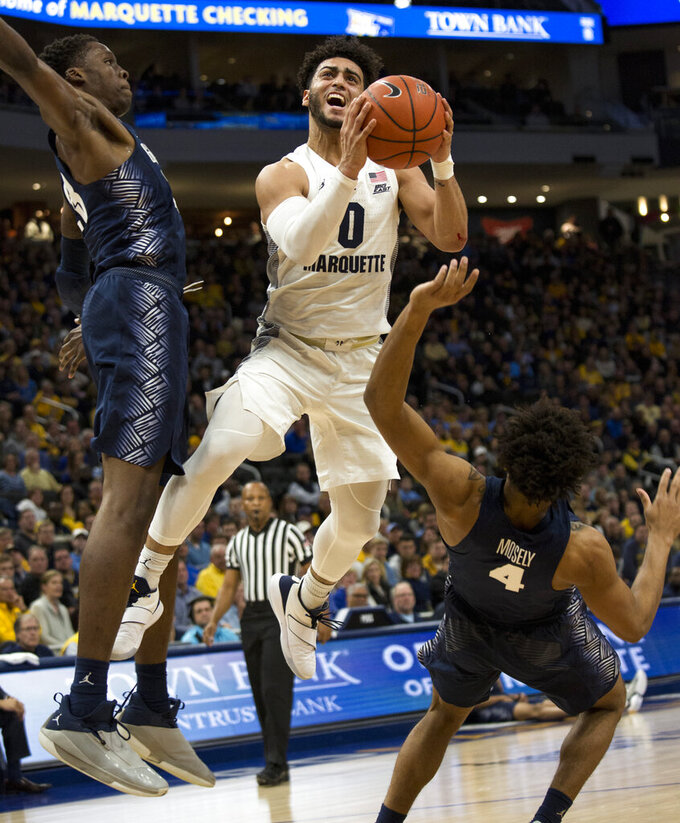 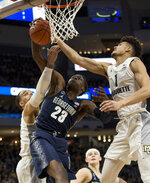 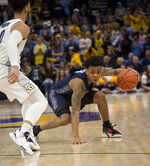 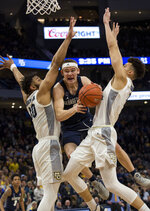 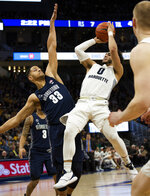 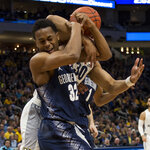 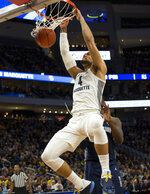 MILWAUKEE (AP) — Marquette has to regroup quickly to salvage its once-promising season.

"We better try to figure it out," Marquette coach Steve Wojciechowski said. "But regardless, when your offense isn't going the way you want it to, you have to play defense. I thought their freshman guards just had their way with us. Credit to them. I mean, they hit tough shots, not all of them were easy. But, you can't let a backcourt come in here and score 50."

Markus Howard led Marquette (23-8, 12-6) with 28 points, and Joey Hauser added 16. The Golden Eagles, who dropped from No. 10 the previous week, missed a chance to tie Villanova for the conference title. The Wildcats lost at Seton Hall earlier Saturday.

Pickett hit a 3-pointer from the top to put Georgetown up 82-77, and Joey Hauser countered with a 3 from the left corner to make it 82-80 with 46 seconds left. Govan hit the first of two free throws to put the Hoyas up 83-80. Howard was fouled on the ensuing possession, but only hit the second free throw to make it 83-81 with 11 seconds remaining.

Picket hit the first of two free throws with 2 seconds left, and time expired during the rebound scramble.

"James (Akinjo) didn't play his best game the first time we played them, made some key mistakes," Georgetown coach Patrick Ewing said. "But I thought he grew from them. In the first half, he started reverting back to mistakes that he made in that game. I got on him a little bit, but I thought that he showed that he's growing up."

Howard had 28 points and Joey Hauser added 16 for Marquette.

Howard, the Big East's leading scorer was 8 of 25 from the field, including 3 of 10 from beyond the arc.

Howard was coming off a six-point performance on 2-of-11 shooting in a 73-64 loss to Seton Hall in which the Pirates scored the final 18 points of the game.

Marquette took a 60-53 lead on floater from the lane by Howard with 10:57 left, but the Hoyas tied it at 63 on Akinjo's 3-pointer. The Golden Eagles led in the second half of each of their four losses.

"Obviously we're disappointed we had this loss," said Marquette forward Brendan Bailey. "We definitely wanted to win. But we're just keeping our heads high. We're talking positive. We're not pointing fingers at anybody. We're all still great, close teammates. We just need to come together even more."

The Golden Eagles, who entered as the Big East's top free-throw shooting team at 77 percent, missed 10 of 36 attempts, including six in the second half.

"We missed more free throws than we normally do," ''Wojciechowski said. "Again, those things happen. We've got to play better defense."

Georgetown: The Hoyas enter the conference tournament looking for consistency. Georgetown hasn't won more than two consecutive games since early December. "We had a great win today and it would be a shame if we don't follow it up on Thursday with another great performance. So, we have to build on it," Ewing said.

Marquette: The Golden Eagles need to take care of the ball after being hurt by turnovers during their skid. Marquette, which had committed 58 turnovers in its previous three losses, had five against Georgetown.