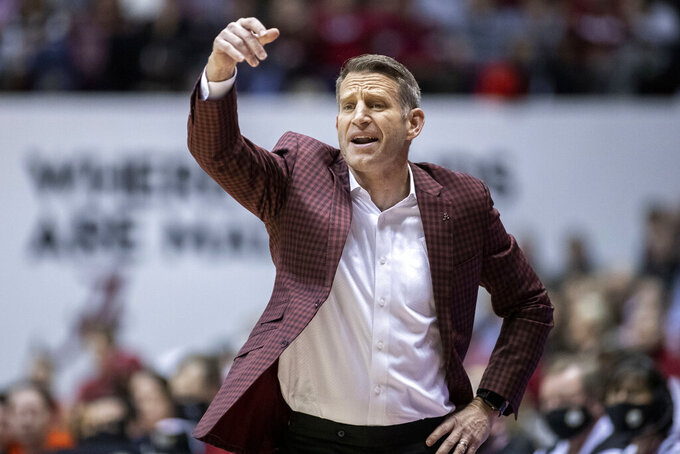 Alabama head coach Nate Oats signals in against Auburn during the first half of an NCAA college basketball game, Tuesday, Jan. 11, 2022, in Tuscaloosa, Ala. (AP Photo/Vasha Hunt)

TUSCALOOSA, Ala. (AP) — Alabama trustees are considering a proposal to build a $183 million basketball arena.

Details of the proposed 10,136-seat arena were presented to the University of Alabama System Board of Trustees on Thursday. It's pending approval in the board's meeting Friday.

The arena would replace 54-year-old Coleman Coliseum, but no timetable for completion was presented. The proposal gave a scheduled bid date for April 2023.

It would have 60% of the seats in the lower bowl, with student seating stretching around most of it and house men's and women's basketball and gymnastics.

“Our fan support and student section has been incredible, and we are excited about the possibility of bringing them even closer to the action," Alabama men's basketball coach Nate Oats said in a statement. “I’ve said multiple times how having that support really makes a huge difference in the home-court advantage, and this would certainly make for an outstanding game-day atmosphere for our team and our fans."

The proposal indicated that extensive renovations for Coleman Coliseum would have cost some $150 million.

Alabama started a $600 million fund-raising campaign in 2018 and said more than $470 million has been raised. Bryant-Denny Stadium has already undergone renovations.