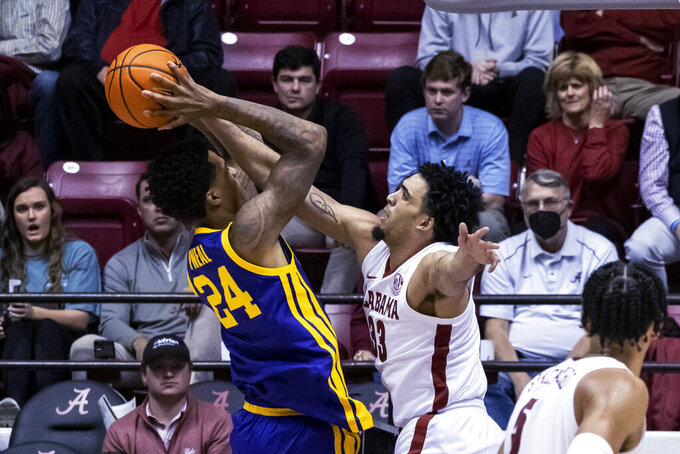 Alabama forward James Rojas (33) blocks a shot from LSU forward Shareef O'Neal (24) during the second half of an NCAA college basketball game Wednesday, Jan. 19, 2022, in Tuscaloosa, Ala. (AP Photo/Vasha Hunt) 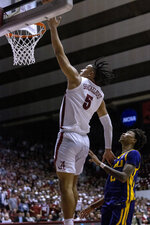 TUSCALOOSA, Ala. (AP) — Keon Ellis made two free throws with 5 seconds left, and Alabama survived a late comeback bid by No. 13 LSU to win 70-67 on Wednesday night and snap a three-game skid.

LSU trailed by eight points with 1:08 remaining. Tari Eason, who finished with 26 points and 10 rebounds, dunked to draw the Tigers closer. Brandon Murray hit two free throws, and after four missed foul shots by Alabama, Murray made a 3-pointer with 8 seconds remaining to cut the Crimson Tide’s advantage to 68-67.

“When we’re full strength and we get everybody healthy, we’re going to be tough,” LSU coach Will Wade said. “To fight like that and play like that under the circumstances we had tonight, very impressed.”

Alabama was at the free-throw line frequently in the second half as LSU committed 18 fouls. The Crimson Tide made 21 of their 32 attempts, providing enough scoring despite shooting 33.9% from the field and 20% from 3-point range (7 of 35).

Alabama was No. 14 in the preseason AP Top 25 and picked by the SEC’s coaches to finish second in the league. The opening weeks of the SEC schedule did not match those projections. But the Crimson Tide remain in striking distance of the top of the league, with games looming against ranked opponents Baylor, Auburn and Kentucky.

“I told our guys before the game, let’s get back to it. We had a swagger about us last year where we knew we were going to come in and play harder than everybody we played,” Alabama coach Nate Oats said. “If shots drop at a high rate like they did against LSU last year, we win by 34. If they don’t drop, we still win the game because we’re going to play hard.”

Quinerly came off the bench for the first time this season, the role he filled last year when he was named the Most Outstanding Player in the SEC Tournament. Freshman JD Davison started in his place.

“I have no problem with it. I just want to win basketball games,” Quinerly said.

Alabama: Hosts Missouri on Saturday. The Crimson Tide lost 92-86 at the Tigers on Jan. 8.