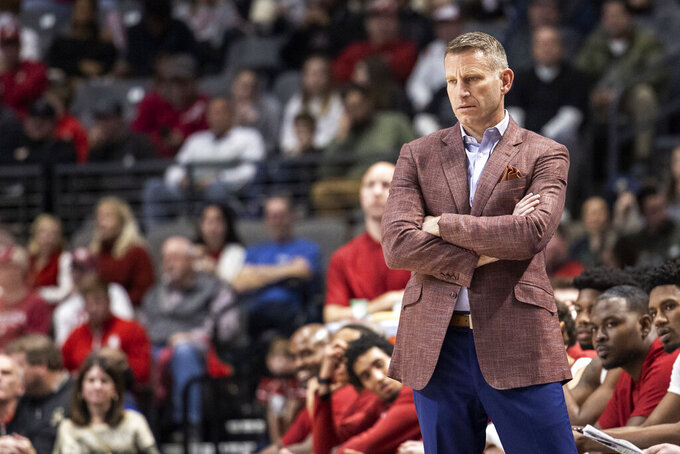 Alabama head coach Nate Oats tracks his team during the first half of an NCAA college basketball game against Davidson, Tuesday, Dec. 21, 2021, in Birmingham, Ala. (AP Photo/Vasha Hunt) 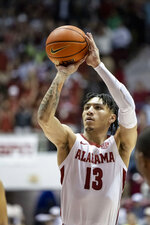 The Crimson Tide (11-6, 2-3 Southeastern Conference) fell out of the rankings this week after rising to No. 6 on Dec. 13, with a win over current No. 1 Gonzaga on the résumé.

The defending SEC champions, who were picked to finish second in the league, hope they have corrected their recent struggles when they host No. 13 LSU (15-2, 3-2) Wednesday night. Alabama has five losses by six points or less, including the past three.

“We’ve got to get to the point where we’re playing hard every day,” Tide coach Nate Oats said Tuesday. “That’s who we are. I think we’ve lost a little bit of our confidence. I think a lot of that came from when we quit playing as hard as we need to play.

"It affects you on both sides of the ball.”

It's a rare three-game skid under Oats, who led Alabama to a 26-7 record last season that included going 16-2 in SEC games.

Alabama fell from the rankings for the first time this season with last weekend's 78-76 road loss to Mississippi State, when Keon Ellis missed a last-gasp 3-pointer. Afterward, Oats suggested his team is “just not quite as tough as we need to be to compete for a league title at this point."

”That’s pretty much what people talk about when they talk about our team, is just where’s the toughness factor?" Miles said. "The fact that he showed that being out for so long, I think it gave our team a little spark, especially in the last two days of practice.

“You can see the energy, the toughness, the physicality and things like that picking up. It was good to have him back.”

Alabama had a few days earlier erased a 14-point deficit late against No. 2 Auburn before falling 81-77. Before that was a 92-86 loss at Missouri.

The Tide still ranks among the SEC's top scoring and 3-point shooting teams. But Alabama is 13th in scoring defense, giving up 74.7 points a game, and last in rebounding defense with opponents grabbing an average of 36.7.

The team's top rebounders are guards Keon Ellis and Jaden Shackelford, who also ranks fifth in the SEC in scoring and tops in 3-pointers per game (3.1).

Alabama did win eight straight games at the end of last season, including a run to the SEC Tournament title, before falling to UCLA in the NCAA Tournament's Sweet 16.

Alabama did add five-star point guard JD Davison and one of the league's top shot blockers in 7-foot center Charles Bediako. Davison has been a key player off the bench, averaging 8.1 points and ranking behind only Jahvon Quinerly in assists.

“We definitely have to become tougher,” he said. “I think some guys that are heavy in the rotation that have won at a high level with us in the past realize that. They’ve showed it in practice.