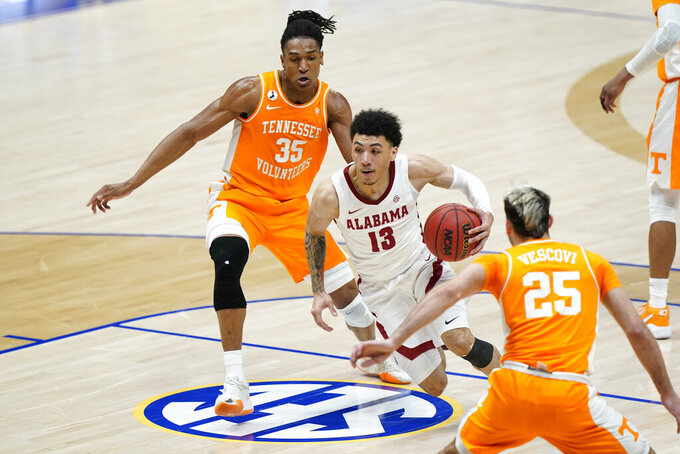 Jahvon Quinerly used to lay awake at night wondering how he could have done things differently, back before they started going so well.

Now, the point guard is the second-leading scorer for No. 5 Alabama. Quinerly is a significant contributor in the Crimson Tide's rise to Southeastern Conference champions and a No. 2 seed in the NCAA Tournament.

The previous few years hadn't gone nearly so smoothly for a player once rated among the nation's top recruits. His name had surfaced as an Arizona recruit in the federal investigation into college basketball corruption and it took a couple of years for him to get publicly cleared.

Once a five-star recruit at a position prized for smart decisions, he began to wonder what could have been if he had made different ones from the outset.

“Countless numbers of nights I’d just think to myself, wow, I had so many schools coming after me in high school. I had so many offers,” Quinerly told The Associated Press in a phone interview this week. “I questioned myself and my decisions that I made coming out of high school.

To be sure, life is pretty good now.

Alabama's top player off the bench was just named SEC Tournament MVP while his parents, who had also endured the fallout from allegations linked to the federal investigation, watched from the stands. The Tide face No. 15 seed Iona on Saturday in Indianapolis.

Quinerly had been headed to join three cousins at his dream school, Arizona, when things fell apart. He found himself part of a federal investigation into then-Arizona assistant Emanuel “Book” Richardson, who had helped recruit him out of New Jersey.

Richardson, who later pleaded guilty to conspiracy to commit bribery, had been accused of taking $20,000 in bribes and planning to use $15,000 of it toward a top point guard. A wiretap recording said the money had gone to Quinerly’s mother, Caren, though neither was named in the federal documents.

An attorney for Richardson later said the coach kept the money for himself.

“Mr. Richardson never gave them the money and did not jeopardize their careers in basketball,” the attorney wrote in a sentencing memorandum.

By then, Quinerly had already signed with Villanova, the first major program to offer him a scholarship as a ninth-grader.

“The honest reason I didn’t stay committed (to Arizona) was because after the allegations came out, and me and my family were accused of taking money, we didn’t hear from (Arizona coach) Sean Miller for a week,” Quinerly said. “And nobody was defending us. It took about two years for the truth to come out.”

But his chief recruiter at Villanova, Ashley Howard, left the Wildcats for a head coaching job, dealing another blow for a player now struggling to trust.

Quinerly mostly languished on the bench in a limited role as a reserve before transferring to Alabama after his freshman season and spending time in counseling trying to work through things.

There was much to sort out, and abundant scars to heal.

“For two years, people on social media, fans all across the country at all these different schools — because you know the FBI probe was a hot topic for a while — everyone just accused me and my family of taking money and we just had to kind of sit back and take it,” Quinerly said. "I told my family, ‘We’re not going to sit here and go back and forth with everybody on social media.’

“So we kind of just had to take it until the truth revealed itself years later."

That ordeal is why Alabama and Quinerly both felt he deserved a waiver to play last season from the NCAA “to make up for everything they put us through,” as he put it.

The NCAA didn't agree. His waiver request was denied, and an appeal was also turned down.

“Him and his family got drug through the mud with that whole thing,” Oats said. “If you look at everything that came out, court proceedings, they had nothing to do with any of it. They never took any money. They never asked for any.

“With what their family went through, with stuff that was said that was untrue about them, you would have thought people on that committee would have shown a little compassion for what the family had been through.”

Quinerly wound up making the most of the situation. He spent a season practicing daily against eventual NBA lottery pick Kira Lewis Jr. and getting better as a result.

The 6-foot-1, 175-pounder is now averaging 12.7 points per game despite only starting seven times, his quickness giving a boost to Alabama's preferred fast tempo of play. He’s also shooting 44.3% from 3-point range and ranks second in the Tide in assists.

But Quinerly felt the SEC Tournament was “a turning point” for him. He averaged more than 15 points in three wins on Alabama’s way to the title and the MVP honors that left his mom in tears in the stands — happy ones, this time.

Caren Quinerly called it the most emotional win she and husband Mark had ever experienced.

“We had so much happiness in our hearts that it actually hurt a little bit and made us cry,” Caren Quinerly said in an email. “It was the emotion from all of the challenges Jahvon and our family have overcome.”

Said Jahvon Quinerly: “That was probably one of the proudest moments of my life, for sure."