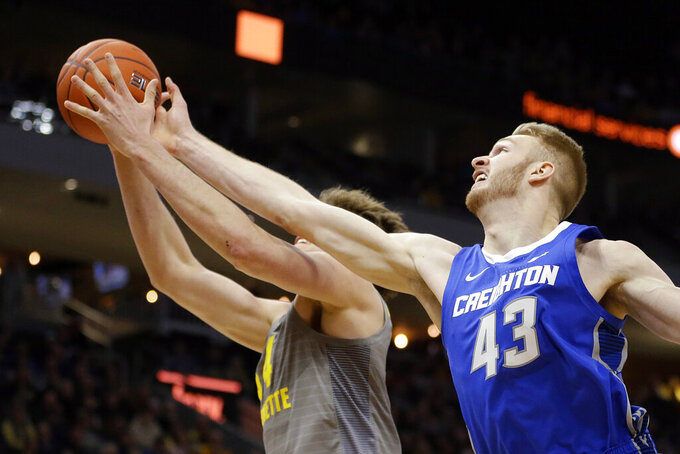 Creighton's Kelvin Jones (43) and Marquette's Jayce Johnson reach for a rebound during the first half of an NCAA college basketball game Tuesday, Feb. 18, 2020, in Milwaukee. (AP Photo/Aaron Gash)

MILWAUKEE (AP) — Ty-Shon Alexander came up big for Creighton on both ends of the floor.

Alexander had 22 points and helped limit high-scoring Markus Howard to 13 as the No. 15 Bluejays beat No. 19 Marquette 73-65 on Tuesday night.

“He’s done a good job on everybody all year and he doesn’t get talked about enough, frankly,” Creighton coach Greg McDermott said. “He wasn’t necessarily a great defensive player when he came to Creighton. He got better last year and he’s made a huge jump this year.”

Marcus Zegarowski added 17 points and Damien Jefferson had 11 for Creighton (21-6, 10-4 Big East), which pulled within a half-game of first-place Seton Hall in the conference standings. The Bluejays won for the eighth time in nine games — including road victories over three ranked teams.

Sacar Anim had 18 points for Marquette (17-8, 7-6). Howard, who entered as the nation’s leading scorer at 27.3 points, was held scoreless in the first half for the first time this season.

“He’s got size, he’s got athleticism, he’s got familiarity,” Marquette coach Steve Wojciechowski said of Alexander. “I think he takes great pride in the defensive end, and then they run multiple guys at him (Howard).”

Marquette, which trailed 32-22 at halftime, pulled even at 38 on a jumper from the top of the key by Howard. The Bluejays answered with eight consecutive points, going up 46-38 on a 3-pointer by Alexander with 12:38 remaining.

Howard’s 3 brought Marquette to 65-60. Jefferson scored on a layup and Alexander hit a baseline jumper from the left side to make it 69-60 with 43 seconds left.

“We had a lot of mental breakdowns,” Anim said. “A couple times we left guys open in transition, easy stuff like that. Just a lack of talking and things like that, mental breakdowns that shouldn’t be happening.”

Creighton outscored the Golden Eagles 13-5 over the final 5:46 of the first half for a 10-point lead at the break. Marquette shot just 9 of 28 in the first half, including 2 for 17 from beyond the arc.

The victory gave Creighton three consecutive wins over Marquette for the first time since 1934-36.

Creighton is closing in on No. 16 Seton Hall, which hosts No. 21 Butler on Wednesday night.

“They’re probably the hottest team in our league right now,” Wojciechowski said about the Bluejays. “They’re really playing well and they outplayed us today, for sure.”

Creighton: The Bluejays play three of their final four regular-season games at home, where they are 14-1 this season.

Marquette: Three of the Golden Eagles' final five games are against Georgetown, DePaul and St. John’s — the bottom three teams in the conference. Marquette has beaten all three this season.

Marquette is at Providence on Saturday.