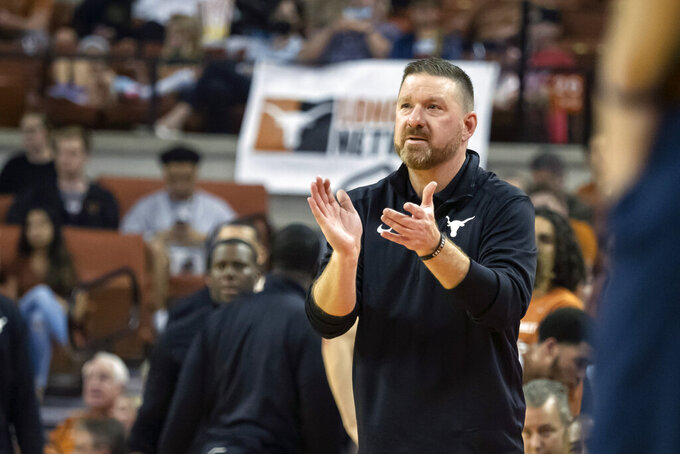 Texas head coach Chris Beard claps for his team during the first half of an NCAA college basketball game against California Baptist, Wednesday, Nov. 24, 2021, in Austin, Texas. (AP Photo/Michael Thomas)

AUSTIN, Texas (AP) — Andrew Jones is a sixth-year senior, but that doesn't mean he is inflexible.

Jones recently went to Texas coach Chris Beard and volunteered to relinquish his starting position in the Longhorn backcourt.

He has flourished in two games as a sub. Jones had 15 points and five assists as No. 8 Texas defeated California Baptist 68-44 on Wednesday night, handing the Lancers their first loss of the season.

Jones missed eight of his nine shots in his last start, a win over Northern Colorado on Nov. 17. In two games off the bench, Jones converted 10 of 16.

“I need to come off the bench so I can understand the flow of the game,” Jones said. “This gives me a chance to get a new perspective and get more comfortable understanding my role, understanding when to attack, when not to attack.”

California Baptist shot 30% in the first half, missing on 8 of 9 3-point attempts, while limiting its opportunities with 12 turnovers. The Lancers had 11 more giveaways in the second half.

Reed Nottage, the leading scorer for California Baptist coming in with 16 points per game, attempted two shots in the half, missing both. He finished with three points, all on free throws.

“Our best defensive game of the year,” Beard said. “No doubt about it.”

California Baptist: Freshman Taran Armstrong began the game leading the nation in assists with 9.2 per game, but he’s not listed atop the NCAA leaders. That's because California Baptist is in the fourth season of a five-year process of reclassifying to Division I from Division II. The Lancers are not eligible for postseason competition or for inclusion in NCAA statistics.

Armstrong, hounded by Texas guard Marcus Carr, had only one assist. Carr made three steals.

“Marcus was trying to do one thing tonight — trying to win the game with defense,” Beard said.

The last three Texas home games, against Northern Colorado, San Jose State and California Baptist, were part of the Abe Lemons Classic. It was not a tournament, just a series of games to honor Lemons, who coached Texas from 1976-82 and won the 1978 NIT championship. He died in 2002. Beard, in his first season at Texas, said he is on a mission to “unite the family” of former coaches and players.

Texas hosts Sam Houston State on Monday at Gregory Gym, a venue in the middle of campus with a listed capacity around 4,000 for the school's volleyball matches. It was the Longhorns' home basketball court for 46 years until the 1977-78 season.