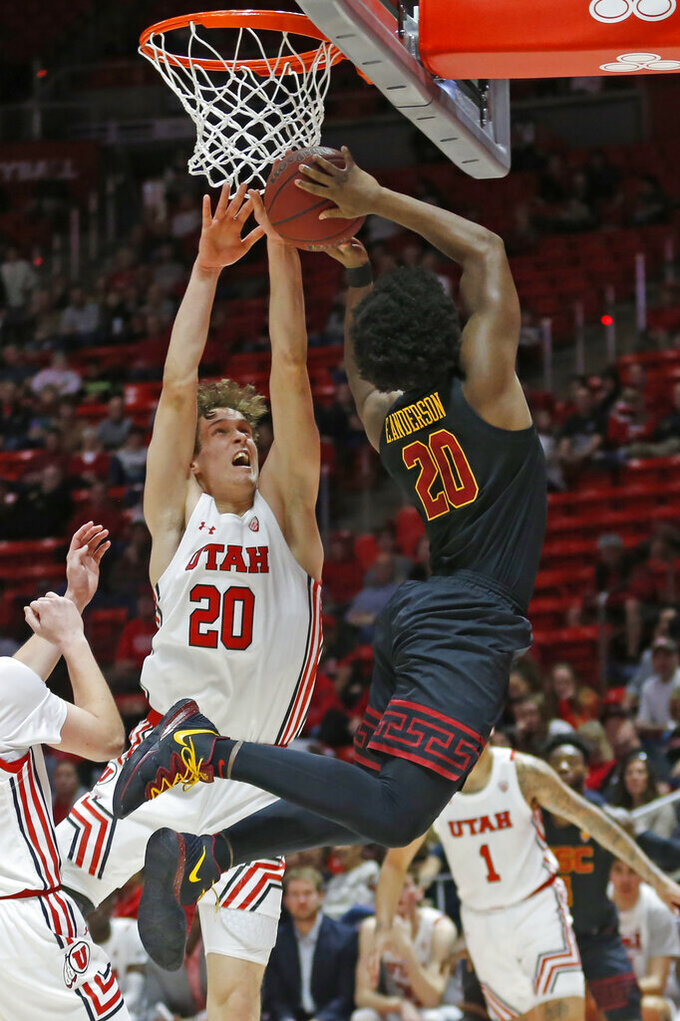 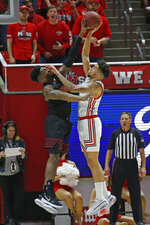 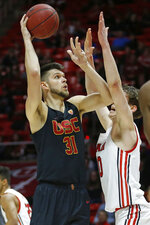 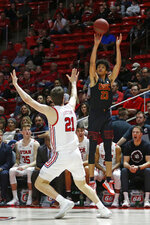 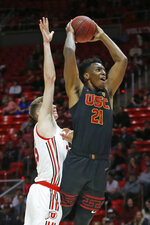 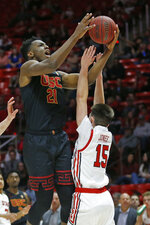 SALT LAKE CITY (AP) — Utah did not squander a late lead to USC, even without the team's starting point guard on the floor in the final minutes. The Utes finished strong.

Rylan Jones missed the final three minutes of Utah's 79-65 victory over the Trojans on Sunday after taking a charge from Daniel Utomi with 3:10 remaining. Utomi fell onto Jones' left leg and then the freshman landed awkwardly on the same leg. Jones had to be helped off the court and to the locker room after the play, while Utomi fouled out of the game.

It marked a turning point in momentum.

Trailing by as many as 15 points earlier in the second half, USC had ripped off three straight baskets culminating in a 3-pointer from Elijah Weaver to cut Utah's lead to 67-62 with 3:45 left. After Jones drew the charge on the Trojans' ensuing possession, Alphonso Plummer followed with a 3-pointer that sparked a game-ending 12-3 run for the Utes.

“It's such a valuable asset when you got somebody that will give his body up,” Utah coach Larry Krystkowiak said.

Jones finished with eight points, four assists, and four steals. Krystkowiak did not have an update on the severity of his injury after the game.

Timmy Allen scored 21 points and collected 10 rebounds to lead Utah while Plummer chipped in a career-high tying 18 points off the bench, matching his career best with five 3-pointers. Mikael Jantunen scored 13 points and Branden Carlson added 11 for the Utes.

“We played with good energy,” Allen said. “Played good defense, stuck to the game plan. Simple things that add up. So I'm happy with our performance overall.”

Utah crashed the glass from the opening tip to give its offense an early spark. The Utes outrebounded USC 9-1 in the first four minutes. Six of those boards came on the offensive glass and led to seven second-chance points for Utah.

It opened the door for the Utes to jump out to a 16-6 lead as Allen made three layups.

"We needed a game like this where guys not only moved it, but then we made shots when we moved it to the right place,” Krystkowiak said.

Then, the Utes went cold. They committed four turnovers and missed seven straight shots over a six-minute stretch before Both Gach ended the drought with a layup.

It opened the door for USC to erase Utah's lead. The Trojans finally ahead 19-18 on back-to-back 3-pointers from Max Agbonkpolo and Quinton Adlesh that capped a 13-2 run.

USC faded on offense as the half progressed. The Trojans scored one basket and committed four turnovers over the final 4 ½ minutes before halftime. Jaxon Brenchley and Jones each buried a 3-pointer during that stretch to help Utah go back in front 34-28.

Things initially did not improve for USC after halftime. The Trojans missed four straight shots and six of seven to open the second half, ultimately scoring just one basket in a four-minute stretch.

“We missed a lot of easy shots,” USC coach Andy Enfield said. “We missed layups and we missed some open 3s and then we missed free throws. When you're trying to win on the road, and you're down a couple of guys, you got to try and make some of those.”

Utah took advantage of the dry spell. The Utes ripped off an 11-2 run, culminating in a corner three from Plummer, to stake out a 45-30 lead.

“When you're down a couple of your key guys, especially your size and length, it hurt us defensively and threw us out of our offensive rhythm a little bit,” Enfield said.

“You're never gonna ask him to not do it, because he's dang good at it. But we gotta get a little body armor on him. We gotta get him beefed up, put a little meat on his booty, and make some of those landings softer.” – Krystkowiak on Jones taking three charges against USC and ultimately getting injured on the third one.

USC: Bunches of turnovers and long shooting droughts led to the Trojans suffering their first Quad 2 loss of the season. It puts more pressure on USC to get wins in a closing stretch featuring games against No. 24 Arizona, Arizona State, and UCLA in its quest to secure an NCAA Tournament bid.

Utah: The Utes applied tons of pressure on defense to spark a resurgence in a previously dormant offense. Utah forced 15 turnovers and turned those takeaways into 25 points. It led to the Utes having their most productive offensive performance in a month.