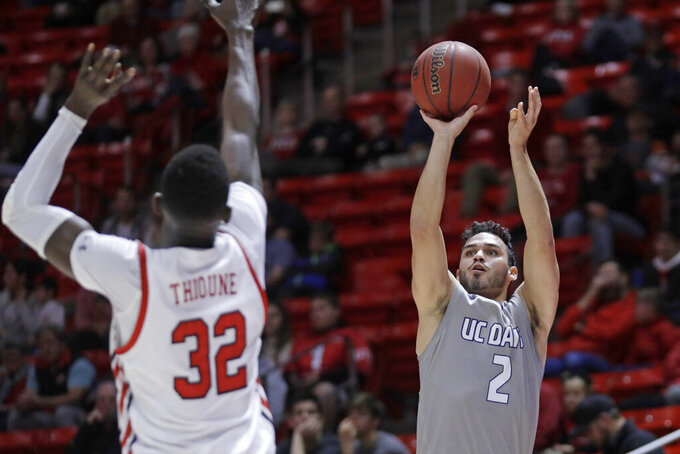 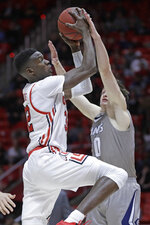 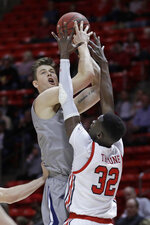 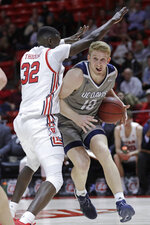 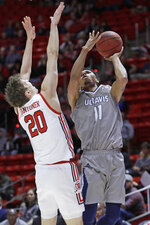 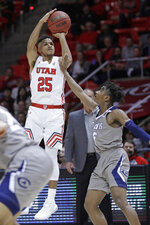 The Utes tallied 17 assists on 26 baskets in their 77-73 victory over UC Davis on Friday night. It marked the second highest number of assists for Utah in a game this season. Good ball movement allowed the Utes to start strong and then finish strong when the Aggies were trying to rally late.

“We're going to be as good as our willingness to share the ball, because when they do flood the paint like that, we're going to have some guys open,” Utes coach Larry Krystkowiak said. “If we're willing to do that, it's great. If we're obstinate and put our heads down and try to make some plays that maybe aren't there, that's a problem for us.”

Timmy Allen led Utah with 20 points. Rylan Jones, playing on an injured ankle, added 18 points and five assists while Riley Battin chipped in 15 points and six rebounds for the Utes.

Utah (5-2) won its third home game of the season after dropping two of three contests at the Myrtle Beach Invitational before Thanksgiving.

Joe Mooney scored 19 points and Elijah Pepper added 14 to lead the Aggies. UC Davis (2-7) forced 13 turnovers but ultimately trailed wire-to-wire after a slow start. The Aggies could not get stops on key possessions down the stretch after climbing back into the game.

“We made a run,” UC Davis coach Jim Les said. “They answered with a pretty good run back.”

The Aggies rallied to within 66-62 on free throws from Damion Squire and Ezra Manjon. Allen kept UC Davis from getting any closer. He made a stepback jumper and a pair of free throws to put Utah up 70-62 with 1:40 remaining.

“We just kept our poise,” Battin said. “We didn't get sped up and were able to take care of business.”

Utah used hot shooting to seize control early in the first half. The Utes shot 68% from the field before halftime – which included going 7-of-12 from 3-point range. It put UC Davis into an early hole that the Aggies could not climb out from as the game progressed.

Battin and Both Gach each made a pair of 3-pointers to highlight a string of six consecutive baskets for the Utes to open the game. Utah ultimately scored on eight of its first nine field goal attempts, culminating in a Battin layup that gave the Utes a 21-9 lead.

UC Davis cut the deficit in half after making three straight baskets. The Aggies closed to within 23-17 on a 3-pointer from Pepper.

Allen answered with back-to-back baskets to push Utah's lead back to double digits. The Utes led by as many as 15 points before halftime, going up 40-25 on a pair of free throws from Jones.

UC Davis made a big rally in the second half and cut Utah's lead to 48-43 when Mooney made back-to- back baskets and hit three free throws. Mooney capped a 13-5 run where the Aggies scored baskets on four consecutive possessions.

Utah played without starting center Branden Carlson after he suffered a knee injury during practice on Monday. The Utes came close to losing a second starter on Wednesday when Jones sprained an ankle near the end of practice.

Jones suprised his coaches and teammates by taping up the ankle, suiting up, and playing through the injury. The freshman point guard ultimately played 34 minutes, made a team-high four 3-pointers, and finished second in both points and assists.

"He's tough as nails,” Krystkowiak said. “For him to have the kind of floor game he had with the injury he sustained on Wednesday is pretty impressive."

Lahat Thioune made his first career start for Utah. The freshman from Sengal scored a career-high seven points in 19 minutes. Thioune also collected a pair of rebounds. In his previous six games, Thioune averaged 1.2 points and 3.0 rebounds in 9.5 minutes.

UC Davis: The Aggies hung with a second straight Pac-12 opponent until the final minutes. Ultimately, close hasn't been good enough for UC Davis, which has beaten a single Division I opponent heading into December.

Utah: The Utes bounced back from a dismal showing at the Myrtle Beach Invitational. Utah has enough talent to light up the scoreboard at times, but the inexperienced Utes have struggled to develop offensive consistency early in the season.