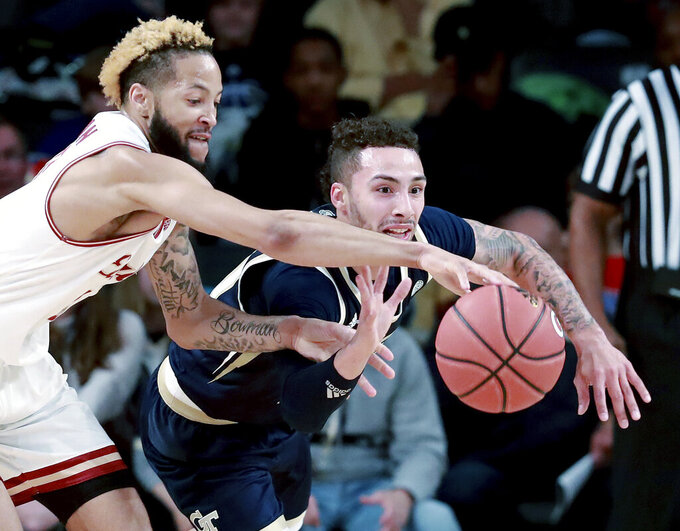 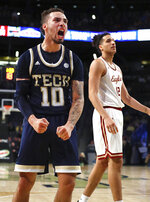 ATLANTA (AP) — It's been a difficult year for Georgia Tech, so coach Josh Pastner is grateful to have a positive teaching point headed into the offseason.

"We had to grind it out and gut it out," Pastner said after his team's final home game. "We found a way to get it done. I still believe we're getting better. It's not where we want to be, but our young guys are getting great opportunities and improving."

Devoe was defending Ky Bowman when Boston College's star guard missed a 3-pointer off the rim as time expired in the extra period.

James Banks III finished with 18 points and nine rebounds before fouling out for Georgia Tech (13-17, 5-12 Atlantic Coast Conference). The Yellow Jackets had lost nine of 10.

Nik Popovic had 24 points and nine rebounds for the Eagles (14-14, 5-11), who were coming off a big emotional lift with a win over Louisville. Boston College dropped to 1-8 on the road in ACC play.

The Eagles erased an eight-point deficit in the second half to take a 67-66 lead on Popovic's hook shot, but Devoe followed with a layup on the next possession and Georgia Tech didn't trail again.

Alvarado hit a 3 at the 4:48 mark of the first half for Georgia Tech's first lead since the early minutes and followed with a fast-break 3 to make it 29-25.

"He did everything that a point guard should do," Devoe said. "He came up huge for us today. We just listened to him and he led us to a win."

The Jackets were up 40-33 at halftime, tying their biggest intermission lead in league play and posting their highest point total in an ACC first half this season.

Boston College: Won seven ACC games last season, its best league finish since 2012-13, but BC still has a chance to match that mark. ... Jarius Hamilton limped off the floor after colliding with Abdoulaye Gueye late in the second half and headed to the locker room. He did not return. ... Freshman G Wynston Tabbs missed his 11th straight game with a left leg injury. He was averaging 13.9 points, 3.9 rebounds and 2.7 assists when he was hurt. ... The Eagles were 3 for 17 beyond the arc.

Georgia Tech: Averaging 59.3 points in league play, the Jackets have been by far the worst offensive team in the ACC this season, but they finished with their highest total since a 92-79 win over Wake Forest on Jan. 5, a span of 17 games. ... In the last game of his career at McCamish Pavilion, Gueye had six points in 21 minutes.

Georgia Tech: Visits N.C. State on Wednesday and plays next in the ACC Tournament.