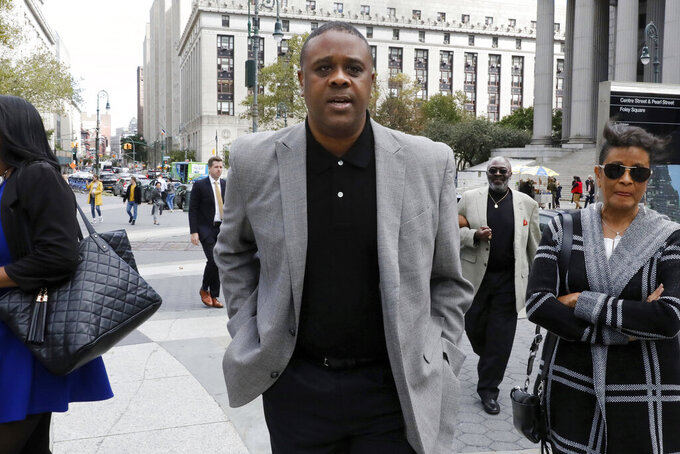 NEW YORK (AP) — An amateur coach was sentenced to three months in prison Friday for his role in a college basketball bribery scheme that sought to steer impressionable NBA-bound athletes toward fledgling money managers and handlers.

Merl Code, 45, was sentenced in Manhattan federal court by Judge Edgardo Ramos, who called the Greer, South Carolina, resident a "very decent human being" who played a lesser role in a conspiracy that gave a glimpse into corruption in major college sports.

"It appears that all this type of conduct is prevalent in college basketball and other college sports," the judge said. "The money is there. There's a lot of it and it's so easy to take it. It doesn't make it right, but it explains how an individual like Mr. Code ends up in this courtroom today."

Without leniency, Code faced between three and four years in prison according to federal sentencing guidelines.

A day earlier, Ramos sentenced former aspiring sports business manager Christian Dawkins, 26, of Atlanta, to a year and a day in prison when sentencing guidelines called for a prison term of three-to-four years.

Dawkins and Code were both convicted at a May trial on a bribery conspiracy charge, though Dawkins was also convicted of bribery. Previously, each had been sentenced to six months in prison after they were convicted in a related case.

They were among 10 individuals arrested in 2017 as authorities revealed a conspiracy involving a network of individuals including several affiliated with apparel companies that sponsor college athletic programs.

The goal was to steer top players to certain schools, then get them to sign with managers who would handle their finances once they turned professional.

Code was a Clemson point guard in the 1990s who later worked with Nike and Adidas. He declined to speak when given the opportunity to address the judge prior to sentencing.

His attorney, Mark Moore, said his client was too emotional.

"This has been very difficult for him," Moore said. He added that Code had no employment prospects and feels "he's toxic because of these prosecutions."

Code and Dawkins were previously sentenced to six months in prison in a related case. They will remain free on bail pending the outcome of appeals.