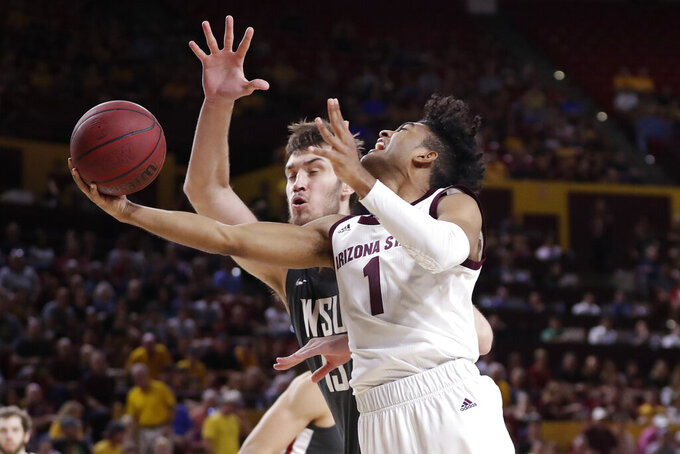 The Pac-12 Conference has the potential to get seven teams through to the NCAA Tournament. That would match the past two years combined and equal the conference record set in 2016.

To get there, a few teams may have some work to do at next week's Pac-12 Tournament in Las Vegas.

No. 13 Oregon (24-7, 13-5) earned its third regular-season title in five years and the No. 1 seed in the conference tournament with Saturday's 80-67 victory over Stanford.

NCAA vice president of men's basketball Dan Gavitt told CBS on Sunday that the NCAA Tournament will go on as planned despite the coronavirus and that the Ducks will be in the bracket no matter what happens in Las Vegas.

Southern California (22-9, 11-7) may have popped its NCAA Tournament bubble by beating rival UCLA 54-52 on Saturday.

The loss by the Bruins is likely keep them on the bubble, due to an ugly start to the season. UCLA (19-12, 12-6) did come alive at the right time, winning seven of its last eight games to finish within a half-game of sharing the conference title with Oregon.

Arizona State (20-11, 11-7) was in position to win the regular-season title just two weeks ago, only to lose three straight games, including to last-place Washington. The Sun Devils gave themselves a little bubble cushion on Saturday, withstanding Washington State's late rally to win 83-74 after a nice bounce-back game by guard Remy Martin.

“I can't say 100%, but I imagine we are,” Arizona State coach Bobby Hurley said. “We've had a great year, we have a great story, we have one of the most dynamic players in college basketball the rest of the country should get to see — and Remy wants that stage.”

Stanford (20-11, 9-9) missed a massive opportunity to pad its resume with Saturday's loss to the Ducks. The Cardinal were the surprise of the conference early in the season but lost six of seven during one stretch of the Pac-12 season and dropped its final two regular-season games.

Winning a game or two at the Pac-12 Tournament may be needed for Stanford to get back to the NCAA Tournament for the first time since 2014.

Rutgers: The Scarlet Knights (20-11, 11-9 Big Ten) moved a step closer to their first NCAA Tournament trip since 1991 with Saturday's 71-68 overtime victory at Purdue.

Utah State: The Aggies (26-8) took out the guesswork by beating No. 5 San Diego State to earn the Mountain West Conference's automatic bid. They also shrank the bubble by one team, possibly costing a team a spot in the field of 68.

Oklahoma: The Sooners (19-12, 9-9 Big 12) capped the regular season with a last-second 78-76 road win over TCU to push them further from the bubble. A win over West Virginia to open the Big 12 Tournament would make them feel even more comfortable.

North Carolina State: The Wolfpack (19-12, 10-10 ACC) needed to beat Wake Forest to keep their NCAA hopes alive and did, 84-64. Winning a game or two in the ACC Tournament will make them feel even better about their chances.

Xavier: The Musketeers (19-12, 8-10 Big Ten) didn't do themselves any favors by closing the regular season with two straight losses and have just three Quad 1 wins. Xavier doesn't have any bad losses on its resume, but a loss to DePaul in its Big East Tournament opener could lead to some tense moments on Selection Sunday.

Texas Tech: The Red Raiders (18-13, 9-9 Big 12) could have made things a whole lot easier with a win over No. 1 Kansas. A 66-62 loss means last year's national runner-up may need a win in the Big 12 Tournament to feel more comfortable on Selection Sunday.

Purdue: The Boilermakers (16-15, 9-11 Big Ten) may have lost their last hope of an at-large bid with the loss to Rutgers. Purdue likely has too many losses to get in and a losing conference record doesn't help.

South Carolina: An 83-74 loss to Vanderbilt on Saturday likely puts the Gamecocks (18-13, 8-6 SEC) in the position of having to make a deep SEC Tournament run to earn a spot in the field of 68.