Another Sweet 16 for Michigan, but no further glory 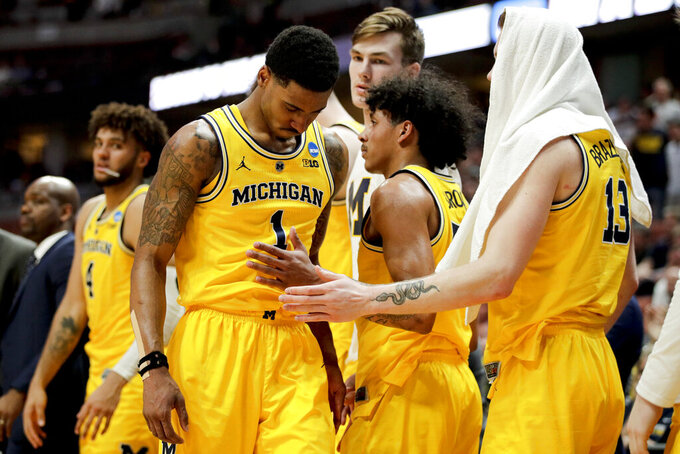 ANN ARBOR, Mich. (AP) — In the past two seasons, Michigan reached a Final Four and a Sweet 16 on the strength of its outstanding defense.

Then the Wolverines ran into a Texas Tech team that's making a similar run.

Michigan's season ended with a thud Thursday night — a virtual hailstorm of missed shots from the perimeter in a surprisingly lopsided 63-44 loss to the Red Raiders. It was Texas Tech's defense that won the day, and it was a disappointing ending for the Wolverines, who won their first 17 games and looked like one of the nation's top teams for much of the season.

"I will give you the message that we had in the locker room, that this game shouldn't define who we are," coach John Beilein said. "(Assistant coach) Saddi Washington was great to bring that up."

Michigan made the Sweet 16 for a third straight season and the fifth time in seven years, but the Wolverines couldn't match their exploits of 2017-18, when they won the Big Ten Tournament and went to the Final Four.

This season's team fell just short of a conference title in the regular season, losing twice to rival Michigan State. Then the Wolverines fell to the Spartans a third time in the title game of the league tournament.

Michigan (30-7) made it through the first weekend of the NCAAs without much drama, but the Wolverines fell flat against Texas Tech, shooting 1 for 19 from 3-point range and allowing the Red Raiders to pull away early in the second half. Michigan experienced occasional offensive lulls this season, and this was one night the Wolverines couldn't afford to have their 3-point well run dry.

"It was a bad day to have a bad day against a really good Texas Tech team," Beilein said. "We will grow from it. These guys understand it and it hurts because of the nature of the loss. We got down so big and could not come back, a little bit like our Villanova loss last year."

That Villanova loss took place in the 2018 national title game, and when Michigan routed the Wildcats 73-46 in a November rematch, the Wolverines served notice that they were still a team to be reckoned with — even after losing Moe Wagner to the NBA. Michigan also beat North Carolina by 17 in November.

The Wolverines didn't necessarily get worse after that, but other teams improved to their level. Ultimately, the three losses to Michigan State may sting more than the game against Texas Tech — although the one-sided nature of Michigan's final game was somewhat shocking.

"We didn't hit shots we usually hit," freshman Iggy Brazdeikis said. "There was a lot of plays that, you know, I feel like on some days we would make those shots and make those plays. But today it just wasn't our day and they did a great job defensively. All credit to them."

Brazdeikis was Michigan's scoring leader this season, and like Wagner, he gave the Wolverines a player who could score both inside and behind the 3-point arc. Charles Matthews and point guard Zavier Simpson anchored the team's tenacious defense, while 7-foot-1 Jon Teske emerged as a significant contributor at both ends of the court.

Jordan Poole had his ups and downs but was the team's second-leading scorer and shot 37 percent from long distance.

Matthews is expected to turn pro, but if the other key players return, the Wolverines would be in good position to contend again for a Big Ten title and more.

"Last year we lost a lot of guys who left, and now we have a lot of guys that are returning," Poole said. "We're going into the offseason extremely excited and ready to play next year."