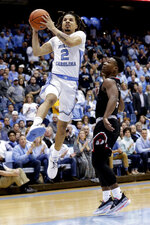 As for the rest of the offense, well, the sixth-ranked Tar Heels are working on that part.

Anthony scored 28 points to help UNC beat Gardner-Webb 77-61 on Friday night, though the game again offered uncertainty when it comes to who is capable of consistently stepping into the role of Anthony’s wingman.

“You’re not going to know who’s going to come get you 15 or 20 points that game,” Anthony said. “Honestly I like it like that.”

Anthony, who had 34 points in the season-opening win against Notre Dame for an Atlantic Coast Conference record for a freshman debut, now has 82 points through his first three games — blowing past Rashad McCants’ previous mark by 19 points.

He’s also the first UNC freshman to score at least 20 points in each of those first three games.

On this night, the No. 2 producer was fellow freshman Armando Bacot inside with his first double-double (12 points and 11 rebounds). No other player scored in double figures and UNC (3-0) has had just two other players (Garrison Brooks and graduate transfer Justin Pierce) to score at least 10 in a game so far.

Still, Pierce pointed to balance that included season highs of nine points for fellow graduate transfer Christian Keeling and Andrew Platek, along with eight for himself.

“We’re a talented group and I don’t think there’s going to be a clear-cut No. 2 option, No. 3 option, No. 4 option, just because of the way each game flows,” Pierce said.

“I thought our mindset and our fight and our will to do the things we needed to defensively was there tonight, and that was great for us against a good team on the road,” Gardner-Webb coach Tim Craft said. “We just offensively struggled.”

Gardner-Webb: The Runnin’ Bulldogs tenaciously hung in this one, staying within four points through the first half and then responding to the Tar Heels’ halftime-spanning run by getting to the foul line to keep the game from getting away. The problem is their own offensive troubles from the first two games (40.3% shooting) followed them to Chapel Hill and showed up when they were flirting with putting some pressure on the Tar Heels.

“We fought back,” Craft said. “Man, we had chances late. If we could’ve just got a shot or two to go down.”

UNC: The Tar Heels were coming out of a weeklong break since winning at UNC Wilmington in a game that left coach Roy Williams to lament: “We're not a very good basketball team if we've only got three guys that can make a shot.” Things weren’t significantly better for stretches of Friday night, either, though they shot 50% after halftime to build a double-digit lead after leading just 30-27 at the break. The good news is help could come soon in the form of senior Brandon Robinson, who got in some warmup work as he nears his debut from a preseason ankle injury.

The 6-foot-10 Bacot made 6 of 9 shots but also had three turnovers. He had the ball stripped away multiple times inside when he brought it down toward his waist with shorter defenders lurking to Williams’ chagrin.

“It was just more like a way to power it up, kind of load up,” Bacot said. “But against those type of teams, I don’t really need to do that. I can just keep the ball high and finish it.”

Anthony hit a huge 3-pointer over Nate Johnson to beat the shot clock at the 5:48 mark to put UNC up 10, one of several sequences that helped the Tar Heels keep the Runnin’ Bulldogs at arm’s distance. He also made 11 of 13 free throws.

But he had just one rebound after becoming the only freshman in program history to go for at least 20 points and 10 rebounds in consecutive games.