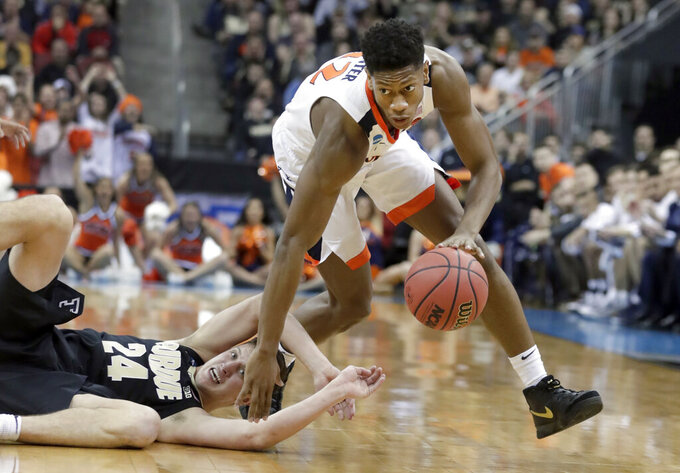 FILE - In this March 30, 2019, file photo, Virginia's De'Andre Hunter dribbles past Purdue's Grady Eifert (24) during the first half of the men's NCAA Tournament in Louisville, Ky. Although this year’s Final Four is being touted as one in which experience and teamwork won out over raw talent, three of the teams in Minneapolis this week possess that young NBA talent, including Virginia and Texas Tech. (AP Photo/Michael Conroy, File)

In the 30 seasons since the NCAA Tournament started morphing into "March Madness," 120 teams have traveled the road to the Final Four. That's 120 unique formulas that have worked to make it onto college basketball's biggest stage.

For all the debate about what counts more toward building a championship program — great teams with veteran leaders and role players versus outstanding individual talent, even if that talent makes only a short pit stop in college before going to the pros — an Associated Press analysis of rosters found that one factor outweighs all else:

The most surefire way to consistently advance deep into the tournament is by amassing players with enough NBA potential to leave college early.

The AP analyzed rosters of every team to make the tournament at least 10 times over the last 30 years and saw a trend that goes beyond the anecdotes and occasional tales of magical runs that have underscored the storytelling driving this debate for decades. The conclusion, as succinctly summed up by Gonzaga coach Mark Few: "It's not a big secret. If you want to win and advance in this tournament, you have to have NBA talent."

"You can get the NBA talent through recruiting one-and-dones, or you can do it through development," Few said. "But whether it's one-and-dones or two-and-dones, you have to have it."

A wealth of NBA talent has been the mainstay on perennial contenders such as Kentucky, Duke and Kansas, which are among the programs that stand out in the AP analysis. Of the 79 teams the AP analyzed (including seven that made fewer than 10 appearances but went to the Final Four at least once), those blue bloods, along with North Carolina and Connecticut, were the only programs that averaged nearly three wins — a trip to the Elite Eight — per tournament appearance since 1989. All of those teams were also in the top 10 of programs that had the most early entries in the NBA draft over the same span.

And though this year's Final Four is being touted as one in which experience and teamwork won out over NBA-ready talent, three of the teams in Minneapolis this week do, in fact, have underclassmen on the roster who could be first-round draft picks. Sophomores Jarrett Culver of Texas Tech and DeAndre Hunter of Virginia are potential lottery picks in this year's NBA draft, and even Auburn made it this far with the help of now-injured sophomore Chuma Okeke, who is widely considered to have first-round ability.

The reality only serves to heighten the debate about what is essentially the professionalization of college basketball. It's an issue that has become increasingly fraught in the wake of FBI investigations that further reinforced the influence that big money, shoe companies and the prospects of pro stardom have on the college game.

"There are some things that are wrong with it, things that take place that are inappropriate," said Auburn coach Bruce Pearl , who himself has been previously banned by the NCAA and, more recently, has seen a handful of his Tigers assistants caught up in the current probe. "That's the business of college basketball. The reason why the NCAA is involved in this is because it's their job to monitor."

There are, of course, exceptions to the talent-equals-titles rule. This year's Michigan State squad doesn't appear to have any NBA-ready underclassmen on its roster, even though the Spartans are a program that traditionally draws that sort of talent.

The Loyola-Chicagos, George Masons and VCUs of the world are the teams that prove, semi-regularly, that anything is possible, and are a big part of the reason the tournament captivates America every spring. But they are the outliers. The reality is that gritty, unselfish teamwork is nice, but raw talent is better.

"It's like when I go to (fried chicken restaurant) Grandy's, do I want double mashed potatoes or mashed potatoes and corn?" said Texas Tech coach Chris Beard. "I want both. So we would love to have All-Americans and turn 'em into grinders."

As Gonzaga's role in the sport has morphed from plucky underdog to perennial power over the past two decades, Few says he's changed his strategy from one that emphasized roster building to one that focuses on roster management.

"The most important part of the year now is April and May," he said, in a nod to the period when NBA-caliber players such as Rui Hachimura and Brandon Clarke make their decisions about whether to stay or go. "You project what they're going to do, then you plan accordingly."

No program runs on the hamster wheel of quick turnover more than Kentucky. Not surprisingly, the Wildcats, thanks largely to the impact of the one-and-done factory John Calipari has been running for the past decade, have been to the tournament 29 times since 1989 and sent 45 players to NBA before they graduated. They average just shy of three victories per trip, and just shy of 1.7 early departures per year they've appeared. In the AP analysis, they are alone in their own quadrant of the data grid.

Not included in the study are teams that didn't make the tournament despite having one-and-done and other early-entry talent. Ben Simmons spent one year at LSU, and Markelle Fultz spent a season at Washington, but neither played in March Madness.

On the other end of the spectrum, having NBA talent is no guarantee of success. Both Texas and Southern California have put more than a dozen early entry players into the league over the span of the study, but their victories-per-tournament average hovers around 1.

And yet, the way the top programs have ensured consistent success, the analysis proves, is by repeatedly securing that kind of talent.

But there's a chance everyone might have to recalibrate.

With the NBA and its players' union considering changes that could end one-and-done, and possibly allow players to go to the NBA straight from high school — the way the system worked for decades before 2006 — Kentucky's path to success could be in peril.

"I don't know how it will play out, but we'll try to be first in whatever we're doing," Calipari said.

It's not only the Wildcats who might need to adjust.

Even programs like Michigan and UConn, which tend to keep players around longer, haven't shied away from the realities of college basketball in the 2000s: one-and-dones drastically improve teams' outlooks, like it or not.

"We've never said we're not going to take a one-and-done guy," said Wolverines coach John Beilein, who leads a program that, in many ways, wrote the first chapter of the book on modern basketball when the Fab Five came through in the early 1990s. "But at the same time, we're going to be very open with a young man, that if you're coming, this is a destination. This is not a stopover."

Over the three decades the AP studied, Michigan averaged 2.375 wins in each of its 16 NCAA Tournament appearances, while sending 16 players early to the NBA.

Like Beilein — and unlike Calipari — Duke's Mike Krzyzewski is nowhere near as outspoken about embracing his school's role as a place where the most talented players are welcome to camp out for a year before heading to the NBA.

In 2015, the Blue Devils won the title with two freshmen (Jahlil Okafor and Justise Winslow) who left to become lottery picks. This year, the Blue Devils have three potential one-and-dones in Zion Williamson, Cam Reddish and RJ Barrett.

They came up 1 point short of the Final Four — agonizing, for sure, but hardly an indictment of a formula that has worked for decades.

It's a formula more schools would like to get their hands on.

"We don't shy away from that," said Beard, who led Texas Tech to its first Final Four this year. "Our goal is to have a team at Texas Tech one day where every guy on the team is an NBA player. No doubt about it, to play on this stage, you have to have pros, and you've got to evaluate and recruit and develop them."