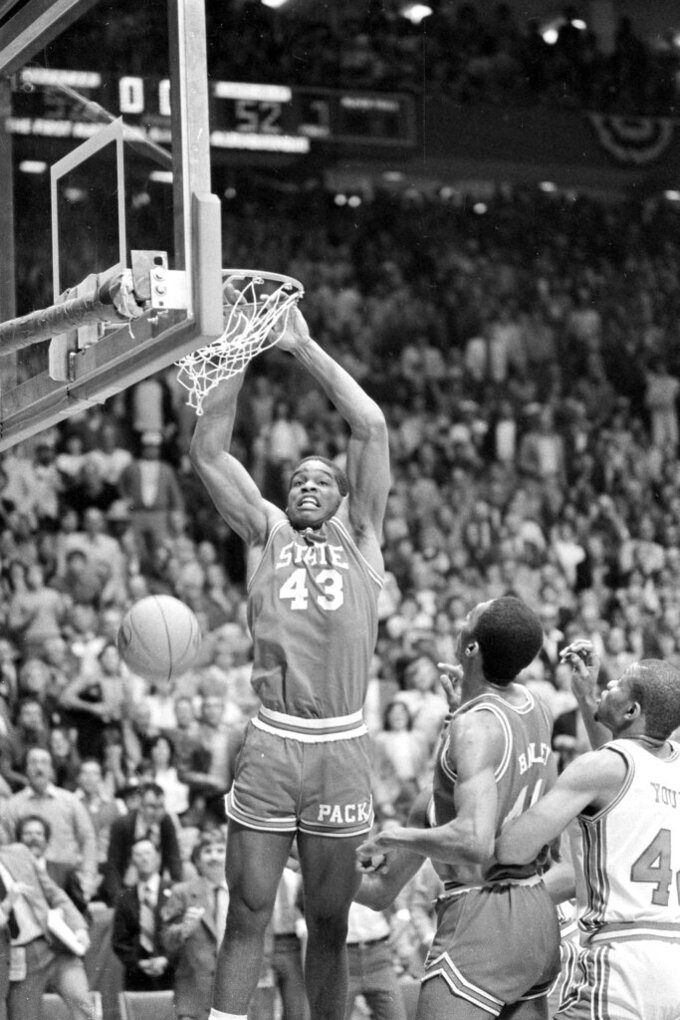 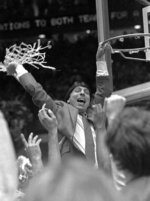 A panel of Associated Press sports writers voted in March 2020 on the top 10 men's basketball games in the history of the NCAA Tournament. They are being republished because the sport has been shut down because of the coronavirus pandemic. The following game was voted No. 3 and the following story was sent April 5, 1983.

Charles, a 6-foot-7 sophomore, grabbed a 30-foot shot by Dereck Whittenburg with four seconds remaining that fell short, and stuffed it home.

The Wolfpack, champions of the Atlantic Coast Conference, became the first team to win the national championship in a season in which it lost 10 games. The old mark was nine, by Indiana in 1981.

North Carolina State had taken time out with 44 seconds left and went into a stall in an effort to get the last shot.

The Wolfpack won their 10th game in a row to finish the season 26-10, with six of those season-ending victories by four points or less. Houston, known for its shot-blocking and explosive dunking ability, had its 26-game winning streak snapped. The Cougars finished with a 31-3 record, suffering their first loss since Dec. 16 against Virginia.

It was against Virginia, an ACC foe, in the NCAA's West Regional championship that Charles' free throws pulled out the triumph with 23 seconds left to get North Carolina State into the Final Four.

Once again it was a pulsating comeback for the Wolfpack, something that has marked most of its games in postseason play. The 16th-ranked Wolfpack, coached by Jim Valvano, came from behind in the ACC to beat Wake Forest, defending national champion North Carolina in overtime and then Virginia.

They did the same in the NCAA playoffs. They rallied to beat Pepperdine in overtime, came from behind to defeat Nevada-Las Vegas, Utah and Virginia again, and held on the beat Georgia.

“He (Whittenburg) took a prayer shot. He had not played up to his potential, but he made the biggest shot of his life,” Valvano said.

Said Whittenburg: “That play was designed for Lorenzo Charles, and I told him to be ready for it.”

As Charles stuffed the ball through the basket and the final second ticked off, N.C. State players leaped into the air, while Houston played slumped to the floor in disbelief. Players from both sides cried openly.

Houston entered Monday night's game as a seven-point favorite, and many thought that was being generous. The men of Phi Slama Jama had put on an awesome show of speed and slam dunks in demolishing No. 2 Louisville 94-81 in the semifinals Saturday.

But these looked more like pledges to the fraternity in the championship, as the Wolfpack controlled the tempo from Thurl Bailey's first basket — ironically, on a dunk shot.

North Carolina State led Houston by 10 points late in the first half and was in front 33-25 at the intermission. But in the second half, Houston ripped off a 17-2 spurt behind 7-foot Akeem Abdul Olajuwon's eight points and five by Benny Anders. That gave the Cougars a 42-35 lead, their biggest advantage.

Then the Wolfpack's outside shooting game came alive, with Whittenburg, Gannon and Sidney Lowe all connecting from more than 20 feet out.

Still, Clyde Drexler's two free throws with 3:19 remaining had the Cougars up 52-46. But Lowe hit a 22-footer before Houston's Michael Young missed the front end of a one-and-on with 2:55 to go.

“We talked all year about being in position to win,” said Valvano, a national champion in his third season as the Wolfpack's coach. “If you're in a position to win, you can win by putting them on the foul line.”

That was the key in the late stages. Houston couldn't make its foul shots and N.C. State capitalized.

Whittenburg, a 6-1 senior who missed 14 games during the season with a foot injury, drilled in two straight jumpers from long range to finally tie the score 52-52 with 1:59 remaining.

Houston, bidding to become the first Southwest Conference team to win the national title, had an opportunity to go ahead, but freshman guard Alvin Franklin missed the first of a one-and-one and North Carolina State's Cozell McQueen tipped the ball to Lowe before falling out of bounds.

Valvano then called a timeout with 44 seconds remaining, setting the stage for one of the greatest upsets in college basketball history.

Anders, a hero off the bench in the Cougars' semifinal victory, barely missed a steal with less than 10 seconds remaining. Whittenburg controlled the ball, spun around and let fly the shot which led to Charles' winning stuff.

The triumph denied the national championship for Houston's Guy Lewis, who had his team in the Final Four for the fourth time in his 27 years at the Texas school.

Houston, which lived by the dunk, died from the lack of it Monday night. The Cougars had only one dunk, that coming in the first half by Olajuwon, the big Nigerian center who paced the Cougars with 20 points, 18 rebounds and seven blocked shots. He finished with 82 points, 59 rebounds and 28 blocked shots for the tournament, and was named the Most Valuable Player in the Final Four.

Two other members of the Houston slam-dunk fraternity, 6-7 Clyde Drexler and 6-9 Larry Micheaux, contributed little. Drexler, the Cougars' leading scorer during the season, hit only one of five shots from the field and scored four points after picking up four personal fouls in the first half. Micheaux also finished with just four points, playing only 18 minutes after the Wolfpack's 6-11 Thurl Bailey had scored most of his 15 first-half points over him.

Bailey failed to score in the second half but was the Wolfpack's leading scorer.

Anders, a 6-5 sophomore, was the only Cougar other than Olajuwon in double figures, with 10 points.

Whittenburg hit only one of six shots in the first half, but would up 6-of-17 for 14 points, the only other N.C. State player in double figures.

The Cougars, a notoriously poor foul shooting team with a 61.4 percent averaging entering the game, made only 10 of 19 from the free throw line. Young missed all four of his foul shots.

Houston outrebounded State 44-34, with McQueen, a 6-11 sophomore, leading the winners with 12.

North Carolina State jumped to a 6-0 lead. The Cougars came right back to take a 7-6 advantage, but two free throws by Alvin Battle and a long jumper by McQueen put the Wolfpack in front to stay in the first half as Bailey hit from the outside and N.C. State used mostly a three-guard offense.

On Sunday, Valvano had said he would slow the tempo of the game to keep the score in the 50s because of Houston's awesome talent, which recorded 13 dunk in wiping out Louisville.

But the Wolfpack surprisingly played run-and-gun at the outset and, when Houston ran with it, the ‘Pack slowed it down. With Bailey’s outside shooting doing the damage, the Wolfpack looked good at intermission.

It was the second national championship in 10 tries for the Raleigh, N.C. school. Coach Norm Sloan's 1974 club, led by David Thompson, beat Marquette for the crown 76-64.