AP Was There: Thompson, Wolfpack end UCLA's long run in '74 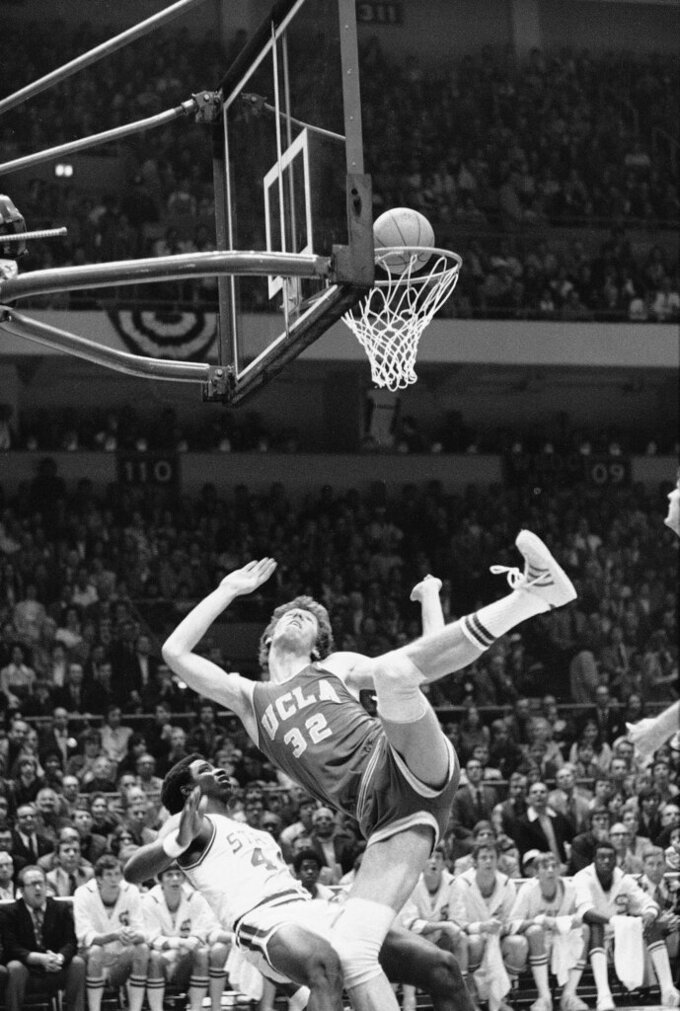 EDITOR'S NOTE — A panel of Associated Press sports writers voted in March 2020 on the top 10 men's basketball games in the history of the NCAA Tournament. They are being republished because the sport has been shut down because of the coronavirus pandemic. The following game was voted No. 8 and this is how the story was published in the Charleston (S.C.) News and Courier on March 24, 1974.

Inspired by a screaming throng of 15,829 at the Greensboro Coliseum, the top-ranked Wolfpack advanced to Monday night's finals against Marquette. The Warriors earlier beat Kansas 64-51 with a nine-point spree keyed by Lloyd Walton early in the second half.

The game between the Wolfpack and the Bruins, billed as the headliner of the day, was everything that it was cracked up to be between the nation's No. 1 and No. 2 teams.

Wonder-player Bill Walton, who scored 29 points for the defending national champions, had helped the Bruins take a seven-point lead early in the second thrilling overtime period.

UCLA led 74-67 and seemed to have the game salted away when the Wolfpack players, with “Pack Power” ringing in their ears, went to work.

Monty Towe, the smallest player on the court at 5-foot-7, triggered N.C. State's rally with two free throws that trimmed the UCLA lead to 74-69. Tommy Curtis scored a free throw for UCLA to make it 75-69 with 3:11 left in the game, but that was the Bruins' last hurrah.

Thompson then took over the flow of the dramatic game with a field goal at 2:55 that brought N.C. State within four. The crowd then went mad when Tom Burleson scored a field goal and a foul shot for the Wolfpack, trimming the UCLA lead to 75-74 with about a minute and a half left.

UCLA's Dave Meyers missed the first shot of a one-and-one free throw situation with 1:16 left, the omnipresent Thompson sucked up the rebound and N.C. State had possession of the ball and the opportunity to end the Bruins' championship skein.

The dazzling forward penetrated UCLA for the go-ahead field goal that put the Wolfpack into a 76-75 lead with 53 seconds left.

The shot pulled most of the fans out of their seats, and the crowd went berserk with the dramatic basket.

With 34 seconds left on the clock, the Wolfpack's home-state idol tossed in two killing foul shots that finally put UCLA away.

Walton, the nation's Player of the Year the last two seasons, played his heart out with 29 points and 18 rebounds. Thompson, another All-American, had 28 points and 10 rebounds for State, which won its 29th game in 30 outings this year.

North Carolina State wiped out an 11-point UCLA lead in regulation time to gain this revenge victory over the Bruins, who had handed the Wolfpack its only loss 84-66 in St. Louis back in December.

The Walton Gang had taken a 49-40 lead at the start of the second half, but the Wolfpack would not lay down. Behind Thompson and Burleson, N.C. State fought back to tie the score at 53-53 with 4:34 remaining in regulation time.

That man Walton once again asserted himself with a field goal that moved the Bruins into a 65-63 lead with 2:22 left, but Thompson, State's superman all season, tied the score with a driving shot at the two-minute mark and sent the game into overtime.

The first overtime was just as dramatic, although neither team was able to score much. Burleson and UCLA's Greg Lee matched field goals. But North Carolina State was unable to cash in on a golden opportunity with 15 seconds remaining and the super-powers went into the second overtime tied at 67-67.

Until this bitter loss, the Bruins had won seven straight national titles and nine in the last 10 years.