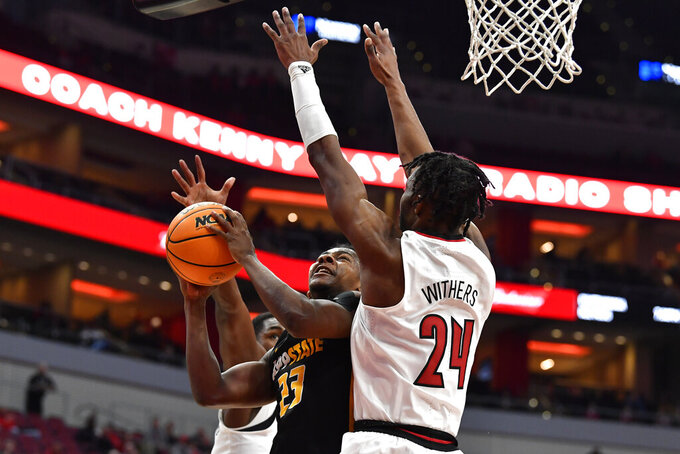 Louisville (0-3) has lost its first three home games of a season for the first time since 1940-41, according to ESPN Stats & Info.

Abson's make in the closing seconds was App State's first field goal since the 6:59 mark when it led 57-45. El Ellis keyed the comeback, scoring his ninth straight point for the Cardinals with 24.2 left.

App State guard Tyree Boykin missed the frontend of a 1-and-1 with 11.1 seconds left and Ellis appeared to make a layup at the buzzer, but officials ruled the ball was in his hands.

Boykin finished with 14 points and Terence Harcum scored 10 before fouling out late for Appalachian State (3-0). The Mountaineers are 3-0 for the first time since the 1997-98 season.

App State led by as many as 16 points in the first half and never trailed. The Mountaineers scored 20 points off 18 Louisville turnovers.

Ellis finished with 29 points for Louisville, which also has home losses to Bellarmine and Wright State. Jae’Lyn Withers, Louisville's second-leading scorer at 16 points per game, picked up his fourth foul with 15:22 left in the second half and fouled out with 4:29 remaining without scoring.

Louisville will look for its first victory under coach Kenny Payne when it faces No. 9 Arkansas on Monday.