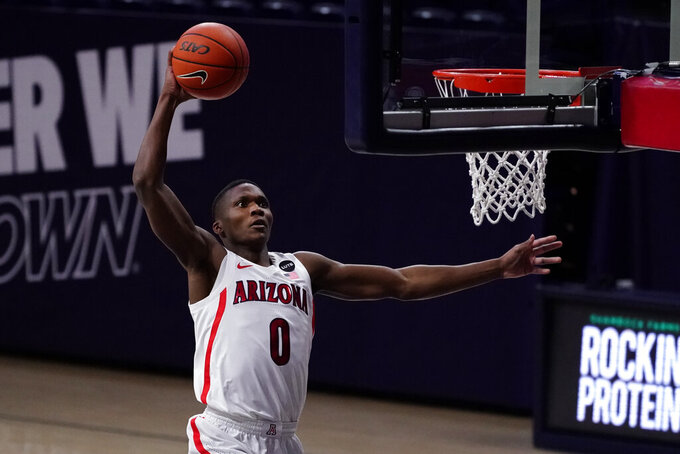 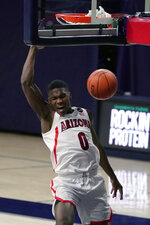 The Wildcats weren't quite as good in the second half, committing sloppy turnovers and letting off the gas as the Sun Devils whittled away at their lead.

Ugly finish, but a season sweep is pretty sweet.

Terrell Brown Jr. scored 18 points, Azoulas Tubelis had 16 points and 12 rebounds, and Arizona dominated Arizona State early before holding on for an 80-67 victory on Monday night.

“For the most part, we did what we needed to in the second half,” Arizona coach Sean Miller said. “For a large part of the first half, we played very well offensively and defensively.”

The Wildcats (12-3, 6-3 Pac-12) rallied from a late seven-point deficit to beat Arizona State on a last-second shot on Thursday.

Arizona overwhelmed the Sun Devils from the opening tip in the rematch, building a double-digit lead in the first three minutes, 22 by halftime. The Wildcats shot 54% and held on through some shaky moments in the second half to sweep the season series for the fourth time in six years.

“We kind of let off the gas on defense and they went on a run,” Brown said. “That's how the game goes sometimes.”

The Sun Devils (4-8, 1-5) were bitter about a late no-call in Thursday's game and came out flat when the rivalry shifted down Interstate-10.

Arizona State didn't score in the game's opening 6 1/2 minutes and trailed by 26 before showing some fight late in the second half. The Sun Devils trimmed the deficit to nine, but ran out of time to complete the comeback, losing their sixth straight.

Remy Martin had 24 points and Jalen Graham finished with 14 points and 11 rebounds to lead Arizona State.

“Arizona was the hungrier team and they were more ready to play right at the start of the game,” Arizona State coach Bobby Hurley said. “There wasn't a whole lot we could do. I commend our effort in the second half, but the cabinet is full with more victories.”

The Wildcats won the first of two games in five days 84-82 on Tubelis' tip-in at the buzzer.

Tubelis kicked off the final sequence by blocking Martin's shot with nine seconds left, but replays showed he hit the senior guard across the arm. Hurley was furious at the no call and complained about it in his postgame interview, leading to a reprimand by the Pac-12 Conference.

“We were ready for the second game more,” Tubelis said. “We were locked in.”

Arizona State was disjointed at both ends in a near-empty McKale Center.

The Sun Devils missed their first 12 shots, didn't score until Marcus Bagley's layup at 13:16 of the first half and compounded the mistakes by struggling to get back on defense during Arizona's opening run.

The Sun Devils played better in the second half and Arizona struggled with turnovers as the lead dwindled. Unlike last season, when Arizona State rallied from 22 points down to win, the Wildcats' lead was too much to overcome.

Arizona State outplayed Arizona in the second half, but came alive too late to complete another comeback.

Arizona dominated Arizona State at both ends in one of its best halves of the season, but took its foot off the gas to allow Arizona State to rally.

Arizona had a bit of bad news in an otherwise dominating first half when freshman Bennedict Mathurin suffered a right ankle sprain.

The 6-ofoot-7 guard from Montreal had to be helped off late in the first half after landing awkwardly while trying to block a shot by Martin.

Mathurin tried running on the court just before the second half, but wasn’t able to continue. He had been giving the Wildcats a nice lift in recent weeks, including a 31-point game in a win over Oregon State.

The good news: X-rays were negative and Miller said he doesn't think it was a significant sprain.

The freshman guard got off to a slow start in the rivalry game and never recovered, finishing with five points on 1-of-8 shooting before fouling out.