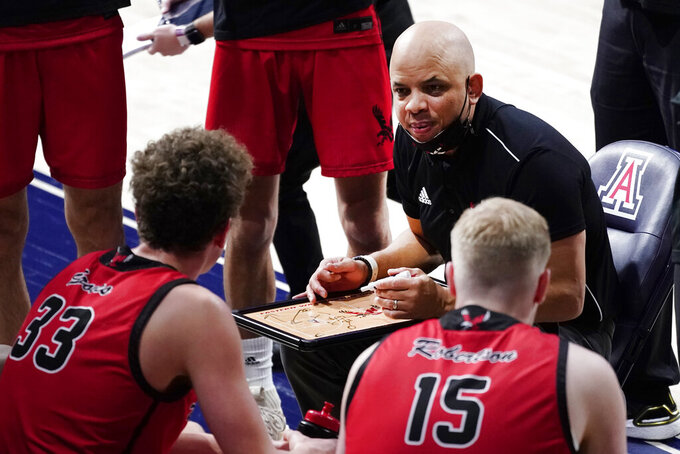 Eastern Washington head coach Shantay Legans talks to his players during the second half of an NCAA college basketball game against Arizona, Saturday, Dec. 5, 2020, in Tucson, Ariz. (AP Photo/Rick Scuteri)

The Eagles had a chance when Tanner Groves converted a three-point play with 41 seconds left and Azuolas Tubelis only made one free throw after being fouled grabbing his own miss with 13 seconds left. The free throw put Arizona on top 68-65.

Jacob Davison drove into the lane and tried a kickout pass for a tying 3-pointer but Dalen intercepted and was fouled. After he made two free throws, EWU made a layup as time expired.

Tubelis finished with 13 points and nine rebounds for the Wildcats (2-0).

The Eagles managed to stay in the game despite missing their first nine shots off the second half and shooting 25%, going 2 of 15 behind the arc. The Wildcats clamped down on the Groves brothers with Tanner's 3-point play their only points after the break.

Tyler Robertson scored 14 points and Rouse had 13 to join the Groves brothers in double figures for the Eagles.

Eastern was outrebound 29-13 in the second half and 47-27 for the game. Arizona had 16 offensive rebounds it converted into 17 second chance points.