Arizona rides dominating first half to 93-77 win over Utah 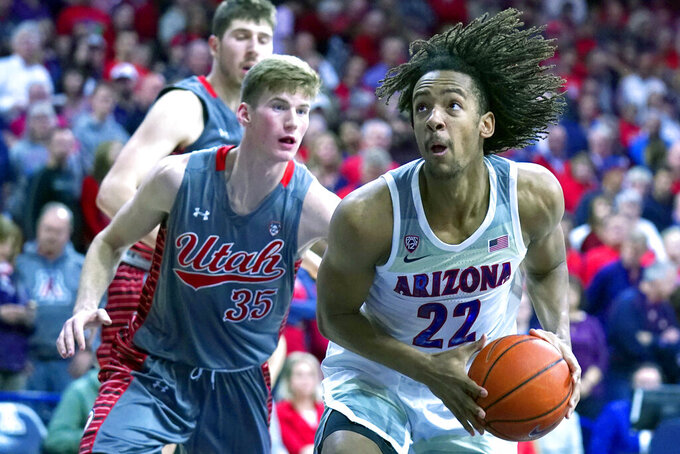 TUCSON, Ariz. (AP) — Arizona guard Max Hazzard showed flashes of his shooting prowess early in the season while adjusting to a new role on a new team. The consistency just hadn't been there.

One breakout game by the graduate transfer from UC Irvine could change that.

Hazzard had 24 points and made six 3-pointers, Zeke Nnaji added 24 points and Arizona rode a dominating first half to a 93-77 rout over Utah Thursday night.

“It was great to see him shoot the basketball (well),” Arizona coach Sean Miller said. “We see him shoot a lot in practice and in fairness to Max, it takes a little while to get comfortable. My hope is there are more moments like the segment he had in the first half and into the second”

The Wildcats (12-5, 2-2 Pac-12) played without center Chase Jeter due to back spasms, but made up for it shooting the Utes out of McKale Center in the first half.

Arizona had eight 3-pointers to lead by 24 at halftime and went 15 for 29 from the arc overall to bounce back from being swept by the Pac-12 Oregon schools last week.

Expected to be a key contributor this season, Hazzard had mixed results this season as he adjusted to coming off the bench after starting 36 games for UC Irvine last year.

Hazzard was hot from the start after entering Thursday's game early in the first half, hitting a couple of 3-pointers as Arizona built its big lead. He kept stroking in 3-pointers, finishing 6 for 10 from the arc after making six the previous five games combined.

“I definitely felt like myself tonight,” said Hazzard, grandson of Hall of Famer Walt Hazzard. “Got some good looks, my teammates were feeding me as well. It felt good to get back to the way I'm accustomed to playing for sure.”

The young Utes (10-6, 1-3) lost by 39 to Colorado in their first Pac-12 road game last week and never stood much of a chance after digging a big early hole in one of college basketball's toughest road venues.

Timmy Allen and Riley Battin had 16 points each to lead the Utes, who have lost four of five — all to teams that have been ranked this season.

Coming off a 17-point loss at Oregon State, Arizona hit the Utes with a barrage of 3-pointers early. The Wildcats made five of their first eight from the arc and used an 8-0 run to build a 12-point lead midway through the first half.

Utah labored against Arizona's aggressive man defense, forcing up contested shots late in the shot clock throughout the first half. The Utes didn't make many, at least from the perimeter, going 2 for 11 on 3-pointers in the half.

The Utes played better to start the second half, hitting a few more shots while creating some problems for Arizona defensively.

Even then, Utah only managed to get the lead down to 17 before Arizona stretched it out again.

“They were smoking from 3,” Krystkowiak said. “Games like that are going to happen. Some of them we played right, but we've got to stay connected.”

Utah struggled at both ends early, leaving little chance of even making it competitive.

Arizona bounced back nicely after being blown out in its previous game, putting the game all but out of reach with a dominating first half.

Arizona forward Ira Lee was hit with a technical foul after staring down Mikael Jantunen following a dunk over the Utah freshman forward.

Frustrated with the taunting T, Miller quickly motioned to the bench for someone to replace Lee, who had just entered the game.

“I don't think Ira meant anything about it, but the point I was trying to make to him was, you do it, you get the dunk and get a technical and you erase it," Miller said. ”It's one thing if you're up big, but if that's a single-possession game or a tight game, you just erased a really good play.