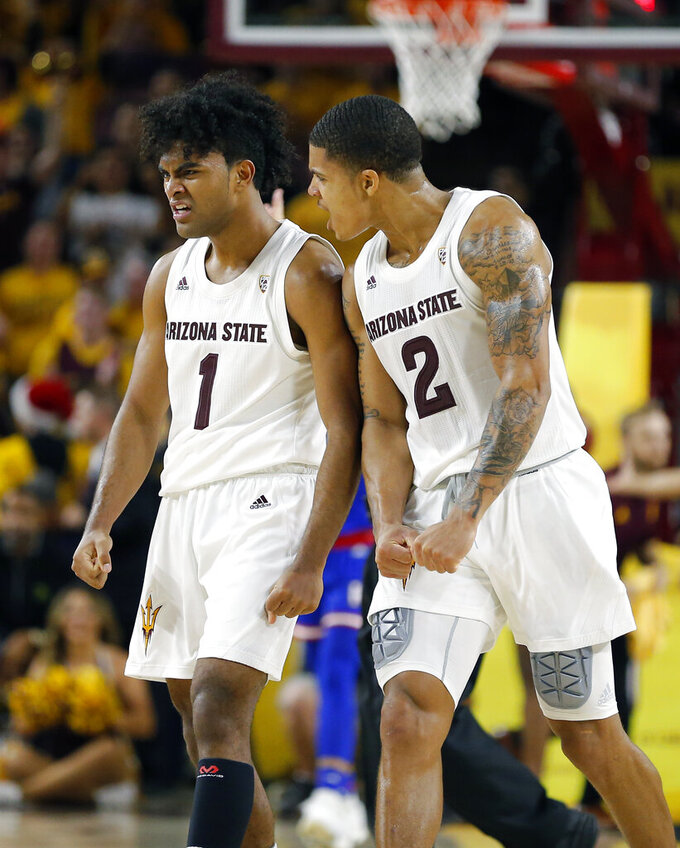 FILE - In this Dec. 22, 2018, file photo, Arizona State's Remy Martin (1) and Rob Edwards (2) in the first half during an NCAA college basketball game against Kansas in Tempe, Ariz. Arizona State will again have a strong backcourt, headed by dynamic point guard Martin and Edwards, who is healthy again after dealing with back issues most of last season. (AP Photo/Rick Scuteri, File)

The Sun Devils made their second NCAA appearance under coach Bobby Hurley a year ago behind a more formidable frontcourt and bigger guards.

Hurley may have more options this season as Arizona State tries to make it three straight NCAA Tournament trips for the first time since the early 1960s. The Sun Devils should be able to push the tempo with athletic guards, rain 3-pointers on opponents or dump the ball inside for a basket.

Hurley has kept the Sun Devils on an upward trajectory since arriving in the desert in 2015, building the program for sustained success, not once-in-a-while trips to the NCAA Tournament.

This year's team has a chance to keep the arrow pointing up.

Arizona State lost two key players from last year's 23-win team, Luguentz Dort and Zylan Cheatham. That leaves the Sun Devils without two of their best defenders and rebounders, but they have plenty of talent coming back, an influx of more coming in.

Arizona State will again have a strong backcourt, headed by dynamic point guard Remy Martin and Rob Edwards, who is healthy again after dealing with back issues most of last season.

"You put a lot of guys who can get up and down the floor and who can shoot the ball, then you have a lot of options," Hurley said. "Then we do have a guy I think we throw the ball to inside in Romello White, just the way he looks and what he's doing in our workouts."

Martin was an energizing spark off the bench as a freshman, giving the Sun Devils a foursome of talented guards — thus "Guard U" — with Tra Holder, Shannon Evans and Kodi Justice.

Martin was Arizona State's floor leader last season but struggled with injuries. He suffered a sprained ankle early in the season and a strained groin during the Pac-12 Tournament that affected his mobility in the NCAA Tournament.

Healthy and energized, Martin is expected to be one of the Sun Devils' leaders this season.

"It was hard to not be able to be the player I know I can be and it's one reason I can't wait to get out there and show people what I can," he said.

White had a solid sophomore season, averaging 9.2 points and 5.6 rebounds. He arrived at fall camp leaner and energized, often dominating teammates in practice.

With Dort and Cheatham gone, Hurley is hoping the 6-foot-9 junior will be able to pick up some of the rebounding slack.

A year after relying heavily on 3-pointers, the Sun Devils struggled from the arc last season, finishing 223rd nationally at 33.6%.

Even with the arc moving back to 22 feet, 1¾ inches, Hurley is expecting his team will be better from 3-point range.

All the Sun Devils' guards can shoot from 3 and they're hoping Cherry and Thomas can stretch the floor by making 3s.

The Sun Devils will kick off their fifth season under Hurley halfway across the world in Shanghai.

Arizona State will play an exhibition against a Chinese team then face Pac-12 opponent Colorado on Nov. 8. The game, part of a Pac-12 overseas initiative, will not count as a conference game.

The Sun Devils will have a six-day break after the game in China before their home opener against Central Connecticut State on Nov. 14.