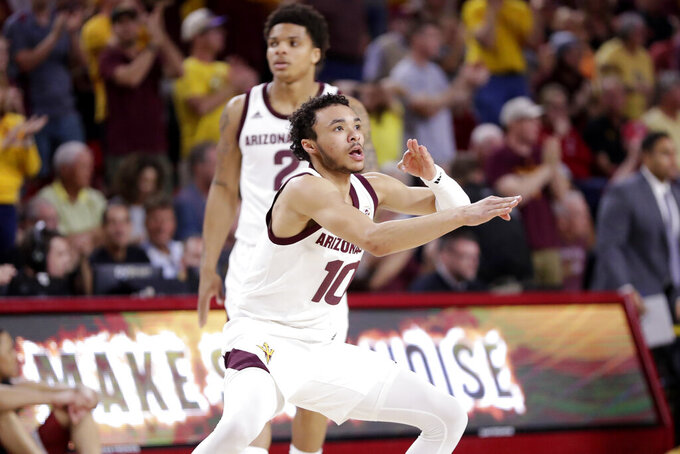 Once up 17, the Sun Devils found themselves in a tight game as shots clanged and balls ended up in Washington State's hands.

By digging down and pulling it out, Arizona State not only earned that coveted bye, it may have locked up a third straight NCAA Tournament bid as well.

“We kept fighting to the end and weren't going to let each other down” Arizona State senior Rob Edwards said after his final home game.

Once the Cougars went to a zone late in the second half, Arizona State started missing shots and turning the ball over. The Cougars (15-16, 6-12) took advantage, going on a 17-2 run and tie the game at 65-all.

Edwards hit a corner 3, Verge a jumper and Arizona State hit six straight free throws in the final 30 seconds to earn a coveted first-round bye at next week's Pac-12 tournament in Las Vegas.

The win also likely assures the Sun Devils three straight trips to the NCAA Tournament for the first time since the early 1960s.

“I can't say 100%, but I imagine we are.” Arizona State coach Bobby Hurley said. “We've had a great year, we have a great story, we have one of the most dynamic players in college basketball the rest of the country should get to see — and Remy wants that stage.”

Washington State struggled shooting from the perimeter in a loss to Arizona on Thursday and again couldn't find the deep range, shooting 5 of 25 from the 3-point arc. The Cougars also struggled with center Volodymyr Markovetskyy fighting foul trouble all night.

“To be in that game is a credit to our guys staying with it,” Cougars coach Kyle Smith said. “They easily could have quit”

The Sun Devils knew they could earn a first-round bye in the conference tournament with a win in the rematch after UCLA and Colorado lost earlier Saturday.

But Arizona State came out tight, clanking shots from all angles. The Sun Devils opened 4 for 15 from the floor and missed their first six from 3-point range to fall into an early eight-point hole.

Arizona State still managed to keep it close and finally found a rhythm at both ends, using a 17-2 run to go up 21-14. The Sun Devils used another late run, after the Cougars rallied, to go up 40-29 at halftime.

Washington State struggled from the perimeter — 4 for 17 from 3 — and with foul trouble in the first half. Markovetskyy was limited to five minutes after picking up three first-half fouls and Noah Williams picked up his fourth foul on a late technical.

The Cougars managed to trim Arizona State's lead to five early in the second half, but Markovetskyy picked up his fourth foul and headed back to the bench. The Sun Devils began stretching the lead back out, but Washington State rallied with its run to tie the game with 3 1/2 minutes left.

The Cougars were still within three with a minute left, but Arizona State outscored them 8-2 over the final 55 seconds.

“We always find a way to make it interesting,” Verge said.

Washington State made a late push to make a game of it, but heads into the Pac-12 tournament with six losses in seven games.

Arizona State was sharp early, sloppy during Washington State's big run, but is now in position to make the NCAA Tournament three straight years for the first time since 1960-64.

CJ Ellerby is Washington State's leading scorer this season at 18.4 points per game.

The sophomore had a tough trip to the desert, shooting a combined 6 for 33 overall and 1 for 14 from 3-point range. He had six points on 2-of-19 shooting and missed all 10 of his 3-point attempts against Arizona State.

“He's fine. Shots just aren't falling,” Smith said. “He's made a lot of big shots for us, made some good shots against these guys. I felt good about him.”

Arizona State has a first-round bye and in the conference tournament.