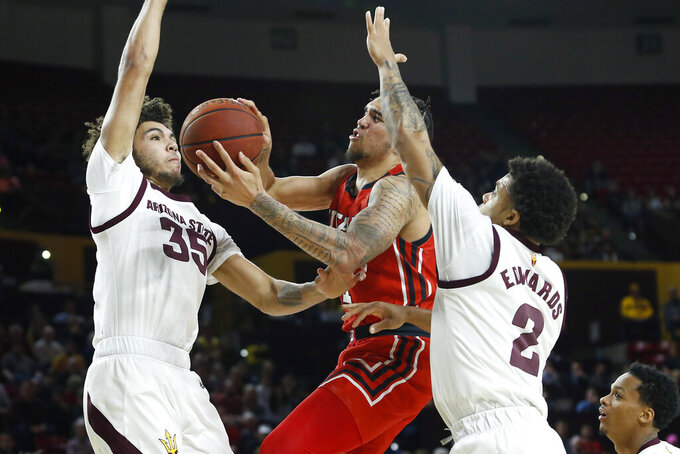 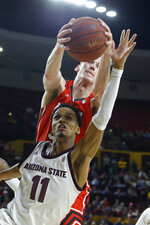 TEMPE, Ariz. (AP) — Arizona State coach Bobby Hurley turned several shades of red during the course of a game the Sun Devils had to have. He raised his arms to rev up the crowd, was hit with a technical foul and nearly got another one.

So much for the “stoic” Bobby Hurley.

Feeding off the fire of their emotional coach, the Sun Devils fought through an intense, rugged game to pull away from Utah 83-64 on Saturday night.

“I've been fairly stoic this season,” Hurley said, drawing laughter from reporters. “My emotions were elevated in this game and I felt very connected to the emotion of the game.”

The Sun Devils (11-7, 2-3 Pac-12) were roughed up in a physical loss to No. 20 Colorado on Thursday and had to fight through a stop-and-start first half against the Utes.

The Sun Devils found a better offensive rhythm in the second half and continued to play gritty defense, pulling away late for a big bounce-back win.

“We all know what we've got to do and we played pretty good basketball out there today,” Martin said.

Utah (10-7, 1-4) continued to struggle offensively in the finale of a tough six-game stretch, shooting 6 of 24 from 3-point range. The Utes also had 18 turnovers that led to 28 points for Arizona.

Timmy Allen had 18 points and 10 rebounds to lead Utah, which has lost four straight and five of six.

“I was pretty pleased with our defense early in the game,” Utah coach Larry Krystkowiak said. “Our offense has just been atrocious. Individual players need to step up and we need to do a better job of sharing the ball."

Utah was overrun by Arizona in the first half Thursday night in Tucson, falling into a 24-point halftime hole before losing 93-77.

The Utes struggled from the perimeter in that game and couldn't get much of anything to fall the first half against the Sun Devils.

Struggling against Arizona State's pressure man defense, Utah took numerous difficult shots, several late in the shot clock. The Utes had a scoreless drought of nearly five minutes, shot 8 of 28 from the floor and were 1 for 10 from the 3-point arc.

The Sun Devils were nearly as disjointed on offense, shooting 12 of 32. Edwards had 11 points on 4-of-5 shooting.

The flow didn't improve much in the second half.

Edwards hit his fourth 3-pointer during a 7-0 run that stretched Arizona State's lead to 39-25. Utah answered, holding the Sun Devils without a field goal for more than five minutes to pull within five.

Arizona State came right back, using a 7-0 run to go up 56-40 with eight minutes left and pulled away.

“We got down 16 and made some terrific basketball plays, shared the ball, hit a couple of open 3s and then kind of got back to that forced offense again,” Krystkowiak said. “It just seems like we're grinding and trying to find an identity with what it is we're doing.”

The young Utes had some good moments during the nonconference season — the big one a win over then-No. 6 Kentucky — but have found the Pac-12 to be a much tougher road.

Arizona State bounced back from its loss to Colorado behind scrappy defense and the Edwards-Martin duo.

Krystkowiak was ejected with 1:23 left while arguing a technical foul call on Matt Van Komen for hanging on the rim. Van Komen dunked the ball and came down on Taeshon Cherry, hanging on the rim for a few seconds while the Arizona State player cleared out.

“I saw a 7-foot-4 guy dunk the ball and somebody's underneath him and you're allowed to hang on the rim,” Krystkowiak said. “It wasn't the proper call to make at that time ... and lost my fuse.”

Allen finished with 18 points, but the Sun Devils made him work for it. The Pac-12's leading scorer missed seven of his first eight shots and went 6 for 18 overall.

“You have to find him on multiple levels,” Hurley said. “He does a little bit of everything in their offense and I just wanted our guys to move their feet, to try and show their hands as much as possible. We made him shoot some tough shots, especially in the first half.”