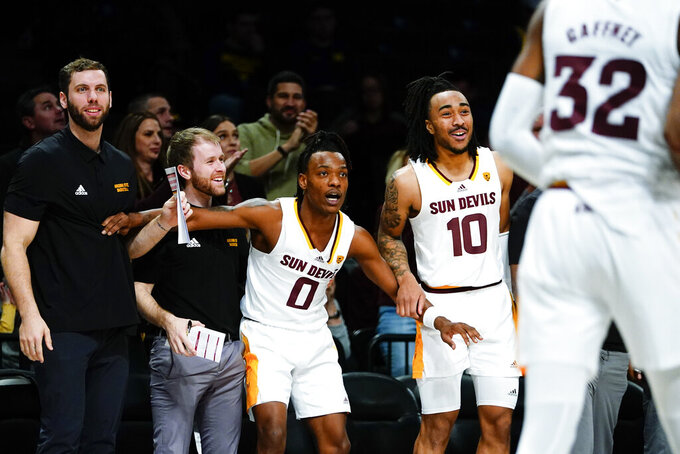 Arizona State's DJ Horne (0) and Frankie Collins (10) cheer for their teammates during the second half of an NCAA college basketball game against Michigan in the championship round of the Legends Classic Thursday, Nov. 17, 2022, in New York. Arizona State won 87-62. (AP Photo/Frank Franklin II)

It was the most lopsided championship game in the event’s 16-year history and Arizona State’s largest margin of victory against a ranked opponent.

“I thought it was an elite performance,” coach Bobby Hurley said. “These guys were just — man, they were making plays all over the court. I just kind of told them, I’m kind of in awe of them a little bit. Just kind of took a step back and was watching and just proud of how they competed and performed and made plays out there.”

DJ Horne added 19 points, Austin Nunez had 15 and Luther Muhammad scored 13 for the Sun Devils (4-1), who reached the championship game by overcoming an 11-point deficit in the final nine minutes of a 63-59 victory Wednesday night over VCU.

All-America center Hunter Dickinson, who was double- and triple-teamed down low by Arizona State, scored 14 points and Jett Howard had 12 for Michigan (3-1), which routed Pittsburgh 91-60 on Wednesday but shot just 34% against ASU.

“I was looking at a lot of things that we did last night in that win and I think it started with our defense,” Horne said. “So I wanted to start there in this game today, emphasizing that defense is going to get us this win.”

Seven players scored during a game-opening 29-10 run by Arizona State, which scored on nine straight possessions during the surge but shot even better in the second half (66.7%) than in the first half (56.3%).

“Some of the shots were uncontested — that was disappointing,” Michigan coach Juwan Howard said. “But there were times when they made shots that were contested because of the fact (of) the confidence level that they had.”

Michigan got within 15 just once following Arizona State’s opening run. Dickinson put back a miss by Jett Howard to cut the lead to 50-34 early in the second half, but the momentum was short-lived as Howard was whistled for a foul 12 seconds later before Arizona State’s Warren Washington slammed home an alley-oop.

Cambridge, who finished with four 3-pointers, hit consecutive 3s — the second with Jett Howard’s hand in his face — before he cut into the lane, took a pass from Washington and dunked to make it 60-41.

A jumper by Horne with 10:55 left extended it to 64-43 for Arizona State, which led by 32 before Michigan emptied the bench with 4:12 remaining. The Sun Devils followed suit with 2:26 to play.

“Getting beat like that is pretty embarrassing,” Dickinson said. “You don’t want to have that kind of wakeup call, but it happened. So for us, I feel like it’ll level us and kind of bring us back down to Earth that obviously we can’t just roll a ball out there and play and expect to win.”

Michigan: Led by the 7-foot-1 Dickinson down low, the Wolverines made 62.3% of their 2-point attempts in their first three games. But with Dickinson mostly contained, Michigan shot just 43% from inside the arc Thursday. The Wolverines missed four consecutive shots at or near the basket during a single possession while down 22-10. They couldn’t make up for it from beyond the arc, finishing 4 of 22 (18%) on 3s.

Arizona State: The Sun Devils entered shooting just 29.4% from 3-point territory but thrived against Michigan’s zone defense, going 8 for 14 in the first half and 11 of 19 (58%) overall.

Michigan: Tries to rebound against Ohio at home Sunday night.