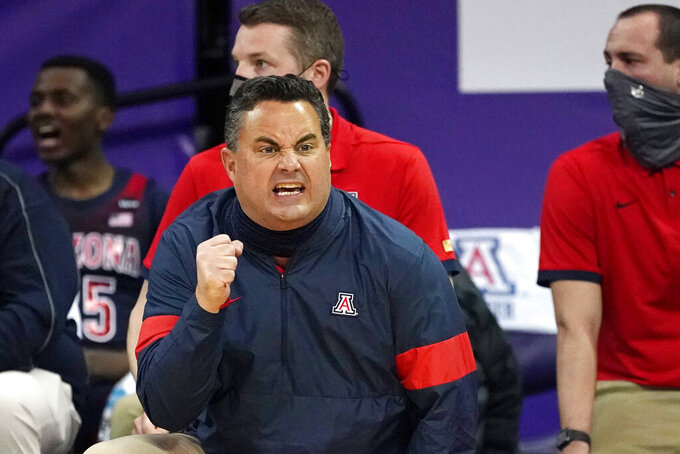 Arizona head coach Sean Miller motions toward the court in the first half of an NCAA college basketball game against Washington, Thursday, Dec. 31, 2020, in Seattle. (AP Photo/Elaine Thompson)

SEATTLE (AP) — There was some anger and disappointment in the wake of Arizona learning there would be no postseason.

There was no carryover to the court for the Wildcats in their first game after finding out there would be no Pac-12 or NCAA tournaments for Arizona.

“It hurt. We prepared well throughout the entire preseason, and we were just competing to hopefully get to that point,” Brown said of learning about the postseason ban. “But it’s not going to stop us. We still got a lot to play for. We still got a chip on our shoulder, and we’re still competing every day.”

The Wildcats (8-1, 2-1 Pac-12) nearly had five players finish in double figures, jumping to a big first-half lead and using an early run in the second half to blow the game open. The Wildcats led by as many as 30 in the closing seconds.

Ąžuolas Tubelis and Terrell Brown Jr. both finished with 10 points and three other Wildcats scored at least eight.

The school announced Tuesday it was imposing a one-year postseason ban related to its long-running NCAA rules infractions case.

Arizona was accused of nine counts of misconduct, including five Level I violations, in a Notice of Allegations sent by the NCAA in October. The violations include a lack of institutional control and failure to monitor by the university, and lack of head coach control by basketball coach Sean Miller.

“If there’s ever a test of of a young person’s character it’s when they get hit with some tough news, and now they have a choice of how they respond,” Miller said. “I think you saw by today’s performance, I saw it immediately by our practices, we’ve got a good group of leadership, we have a great group of kids.”

Washington (1-7, 0-3) lost its fourth straight and second in a row in blowout fashion to a conference opponent. The Huskies were thumped by Colorado 92-69 in their last game prior to Christmas.

Quade Green led the Huskies with 23 points but no other Washington player scored more than seven. Washington shot 31% for the game and just 27% in the second half.

“I really believe that at the beginning of the game I felt like they set the tone and we didn’t,” Washington coach Mike Hopkins said. “We cut it to eight and we couldn’t make a shot, and then they just started pounding us on the glass. And to me that’s unacceptable. You know we just I didn’t feel like we competed the way that we had to compete against a great offensive rebounding team like them.”

Washington suffered consecutive losses by 20 or more points for the first time since the 2002-03 season, the first under Lorenzo Romar. In January 2003, the Huskies lost 91-66 at Oregon and 82-62 at Oregon State.

Arizona: The Wildcats already led the Pac-12 and were 23rd nationally in rebounding margin. That will likely increase after their effort against Washington. The Wildcats outrebounded the Huskies 58-30, including 19-9 on the offensive end.

Washington: For a team struggling to establish inside scoring, the Huskies must get better at shooting the 3. The Huskies were 6 of 31 from behind the 3-point line. Green was 3 of 13 from deep. The rest of the Huskies combined to go 3 of 18. Hameir Wright missed all eight of his attempts.

Arizona: The Wildcats travel across the state to face Washington State on Saturday.

Washington: The Huskies are scheduled to play Arizona State on Saturday although that game may be in question after the Sun Devils had to cancel their game at Washington State due to COVID-19 issues.