Arizona's Lloyd leads Wildcats' rapid rise to a No. 1 seed 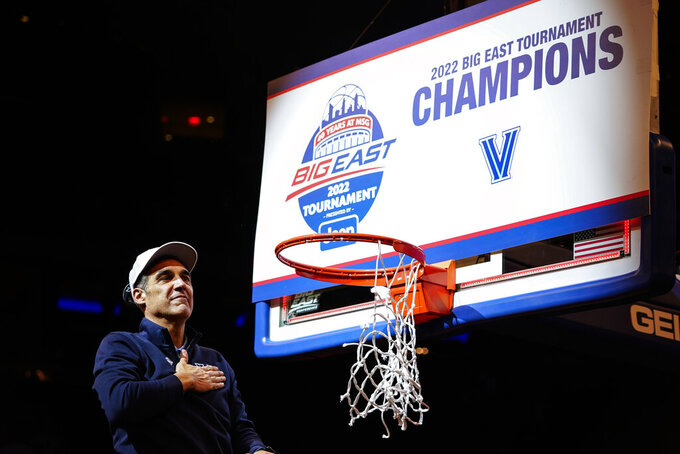 Villanova head coach Jay Wright gestures to supporters while cutting down the net after the final of the Big East conference tournament against Creighton, Saturday, March 12, 2022, in New York. (AP Photo/Frank Franklin II)

Tommy Lloyd has quickly returned Arizona to national prominence after a tumultuous stretch that included NCAA charges tied to a federal corruption investigation into college basketball, the firing of its men's coach and no postseason play.

This new group of Wildcats is working to remove the stain on the program, heading into the NCAA Tournament as a No. 1 seed, topping the field in the South Region in Lloyd's first season.

“It's a great opportunity for us to go continue to make a mark," Lloyd said Sunday night. "So we’re going to attack it. We're not defending anything. We’re going for it. We're going to come out and play with a bunch of energy and hopefully a bunch of swag, and have some fun.”

Arizona (31-3) will open play Friday in San Diego against the Wright State-Bryant winner. It’s part of a quick rise for a program that was unranked in the AP Top 25 to start the season and was picked to finish no better than fourth in the Pac-12.

Lloyd, 47, helped Mark Few build a national power at Gonzaga after a long run as a Zags assistant, then took over at Arizona last April after the school had fired Sean Miller amid the fallout from the corruption case.

The school still faces multiple top-level charges in an NCAA case that is among a handful still making its way through the Independent Accountability Resolution Process (IARP), which was created out of proposals from the commission led by former U.S. Secretary of State Condoleezza Rice in 2018 to reform the sport.

Arizona imposed a postseason ban last season and last played in the NCAA Tournament in 2018. But with Lloyd providing stability and a fresh start, the Wildcats could accomplish milestones not recently seen around Tucson.

Led by sophomore Bennedict Mathurin and the frontcourt tandem of Azuolas Tubelis and Christian Koloko, the Wildcats swept the Pac-12 regular-season and tournament titles.

It's the seventh No. 1 seed for Arizona, which will try to return to the Final Four for the first time since 2001. A title run would mark the first Pac-12 team to cut down the nets since Arizona won its only other title in 1997 under late Hall of Famer Lute Olsen.

“Obviously there's a group of teams that have maybe separated themselves and physically they look the part,” Lloyd said. “And I think we're in that group. But there is a lot of parity.”

Some things to know about the South Region:

Villanova is the No. 2 seed, with coach Jay Wright pursuing a third national title in six tournaments. The Wildcats (26-7) open against 15th-seeded Delaware on Friday in Pittsburgh after winning another Big East title.

“When you go through that experience at Madison Square Garden and you’re in that excitement and then you come down from that, and people are hyping you up, you’ve got to get yourself refocused," Wright said. “It concerns me.”

There's also Tennessee, a potentially under-seeded team at No. 3 after winning the Southeastern Conference Tournament for the first time since 1979. The Volunteers have won seven straight and 12 of 13, including wins against 2-seeds Kentucky (twice) and Auburn.

The bracket includes a pair of first-time tournament programs in Bryant and Longwood.

Entering the play-in game, the Bulldogs (22-9) — who won the Northeast Conference Tournament — have the nation's leading scorer in senior guard Peter Kiss, who is averaging 25.1 points and 5.8 rebounds.

The Lancers (26-6) are the 14-seed after winning the Big South Conference Tournament and will face Tennessee on Thursday in Indianapolis.

Michigan (17-14) snuck in as an 11-seed after blowing a big lead in a Big Ten Tournament loss to Indiana. The Wolverines open against 6-seed Colorado State (25-5) in the Rams' first tournament trip since 2013 behind David Roddy, the Mountain West player of the year.

The game is the second for coach Juwan Howard since his return from a five-game suspension for striking a Wisconsin coach on Feb. 20 to set off a postgame melee.

Eighth-seeded Seton Hall meets ninth-seeded TCU in the first round with the winner likely to face Arizona.

The bracket also features No. 5 seed Houston meeting 12th-seeded UAB as the Cougars look to follow up their first Final Four trip since 1984, as well as No. 4 seed Illinois meeting 13th-seeded Chattanooga.

At the bottom of the bracket, Sister Jean's Loyola Chicago team is back in the field as a No. 10 seed with a first-round matchup against seventh-seeded Ohio State.

None of the other top seeds are in the top 20 of both categories to offer that balance, though Tennessee (third, 86.2) and Houston (11th, 90.9) are among KenPom's top defensive teams.