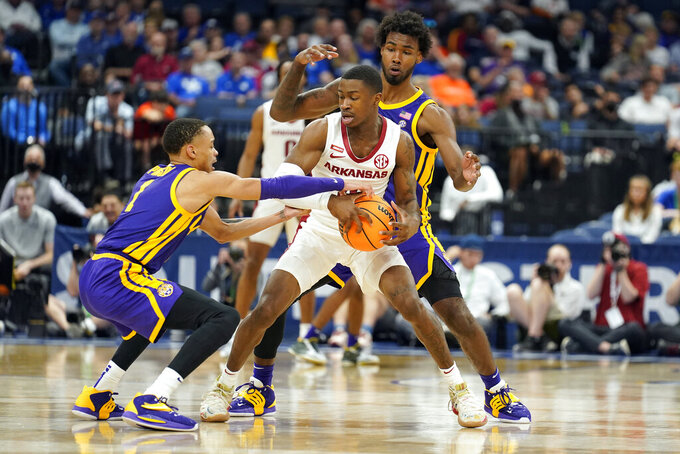 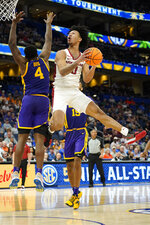 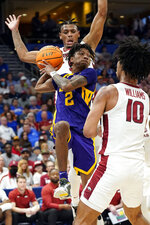 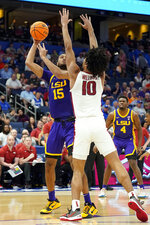 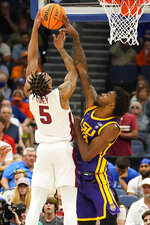 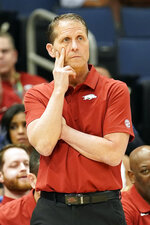 TAMPA, Fla. (AP) — Au’Diese Toney, JD Notae and their Arkansas teammates watched LSU's interviews over and over again Thursday, taking note every time the Tigers insisted they wanted and were looking forward to playing the Razorbacks for a third time this season.

It was all the motivation Arkansas needed.

Fueled by the perceived slight, the 15th-ranked Razorbacks delivered their most- lopsided victory in three games against LSU, a 79-67 victory that sent Arkansas to the semifinals of the Southeastern Conference Tournament.

Toney led the way with 22 points and 10 rebounds in his return from an bruised foot, his final basket a dunk in the waning seconds that flared tempers.

“(There) still was time on the clock, so I just played until the buzzer went off,” Toney said.

Coaches Eric Musselman and Will Wade were already nearing the handshake line when Toney emphatically dunked at a time when most winning teams would have held the ball and let the clock run out. Notae then stole LSU’s lackadaisical inbound pass and missed a layup just after the buzzer sounded. Notae finished with 19 points.

The plays seemed to infuriate Wade, who threw up both hands and exchanged words with Musselman and then the officials.

“You can’t let it bother us when they whip our ass three times," Wade said. "It is what it is. We should have (stopped it). Look, that stuff, I don’t let that stuff bother me.”

Chris Lykes chipped in 18 points as the fourth-seeded Razorbacks (25-7) won for the 15th time in their last 17 games and advanced to face red-hot Texas A&M in the first of two semifinal games Saturday.

No one would be surprised to see Arkansas make the tournament final for the first time since 2017. The Hogs have the talent, depth and balance to beat any opponent on any day. The fifth-seeded Tigers (22-11) know that as well anyone, going 0-3 against the Razorbacks in the last two months.

The Hogs had one more reason to get up for this one: LSU knocked them out of the SEC tourney a year ago in Nashville, Tennessee.

“Just remembering that last play when I turned it over last year, that just stuck with me, too,” Notae said. “Just wanted to beat them every single time we play them.”

This one was close early — until Arkansas used a 19-0 run that spanned halftime and turned a tight game in a lopsided lead.

The Razorbacks scored the final six points of the first half, all by 5-foot-7 guard Lykes, and opened the final 20 minutes with a 13-0 spurt that was the difference in the game. Lykes made three free throws, including two because LSU's Wade was called for a technical foul, and then hit a pull-up jumper at the buzzer to give Arkansas a little breathing room headed into the locker room.

Arkansas was even better after the break. Trey Wade’s dunk got the big run started, but it was fueled on the other end. Defensive stalwart Jaylin Williams had two blocks, and the Hogs forced a shot-clock violation. Arkansas also scored off an offensive rebound.

The Tigers missed their first five shots and couldn’t stop the run despite Wade calling two timeouts. The Razorbacks led 42-26 with a little more than 16 minutes to play and never let up down the stretch.

LSU cut the lead to single digits twice in the closing minutes, but the Hogs answered both times with Lykes — once with a 3 and in the paint on the ensuing possession.

“Electric,” Notae said. "He was just being Chris Lykes out there, honestly. Just speed, being aggressive. Just killer mindset, and we needed that.

Williams finished with six points, 11 rebounds and four blocks for the Razorbacks.

Darius Days led the Tigers with 14 points and 10 boards. Tari Eason, the league’s sixth man of the year, had 15 points.

“They played harder than us majority of the game,” Days said.

LSU: The Tigers are 7-10 in their last 17 games, a head-scratching stretch for a team with enough talent to compete with anybody in the league.

Arkansas: The Razorbacks have been the league’s hottest team for the last two months, thanks mostly to Notae and Williams. The duo gives the Hogs an inside-out combination on both ends that’s hard to match for 40 minutes and seemingly has them poised to make a deep run in the NCAA Tournament that begins next week.

Arkansas plays eight-seeded Texas A&M on Saturday. It will be the third game in as many days for the Aggies and the third meeting this season between the teams. They split the first two meetings.