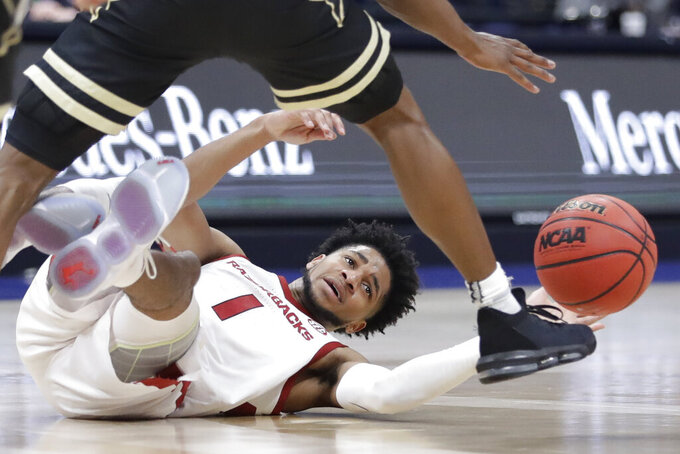 Arkansas guard Isaiah Joe (1) reaches for the ball as he falls in the second half of an NCAA college basketball game against Vanderbilt in the Southeastern Conference Tournament Wednesday, March 11, 2020, in Nashville, Tenn. Arkansas won 86-73. (AP Photo/Mark Humphrey)

FAYETTEVILLE, Ark. (AP) — Arkansas guard Isaiah Joe has declared himself eligible for the NBA draft, but he has not hired an agent.

Arkansas coach Eric Musselman made the announcement in a media session on Monday.

By choosing not to hire an agent, Joe could return to school next season.

Joe, a 6-foot-5 sophomore, averaged 16.9 points and 4.1 rebounds per game this past season and led the SEC in 3-point goals. He missed five games after having surgery on his right knee, and the Razorbacks lost all of them. He scored 21 points in his return, a win over Missouri.

Last month, Arkansas guard Mason Jones declared for the draft. The Associated Press’ co-SEC Player of the Year averaged 22.0 points, 5.5 rebounds and 3.4 assists this past season.