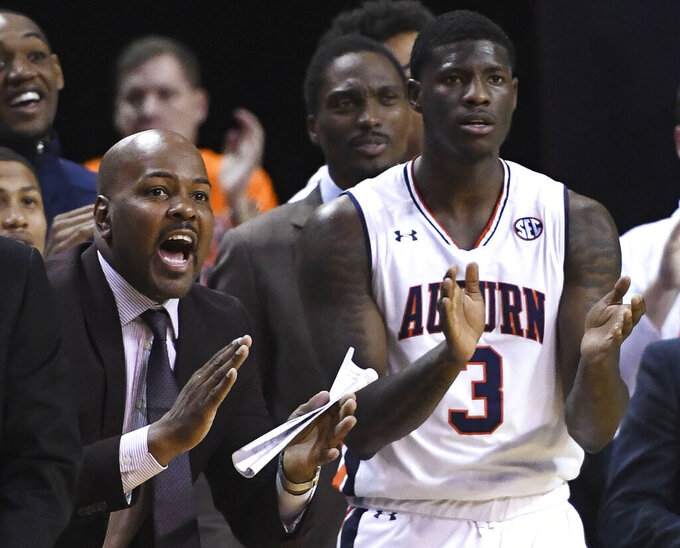 In this Jan. 19, 2019 photo, Auburn assistant coach Ira Bowman, left, cheers from the sidelines during the second half of an NCAA college basketball game against Kentucky in Auburn, Ala. Auburn has suspended Bowman indefinitely on Wednesday, March 3, 2019, amid allegations that he was involved in a bribery scheme during his time at the University of Pennsylvania. (AP Photo/Julie Bennett)

AUBURN, Ala. (AP) — Auburn has suspended assistant men's basketball coach Ira Bowman indefinitely amid allegations that he was involved in a bribery scheme during his time at the University of Pennsylvania.

The university sent a statement Wednesday announcing the suspension, saying "we continue to gather information regarding a situation that recently arose." Auburn didn't elaborate on reasons for the suspension, but ex-Penn coach Jerome Allen implicated Bowman during testimony last week at a federal trial of a former health care executive.

Allen testified that after he left Penn in 2015, Bowman was aware of the alleged scheme to have a son of Miami businessman Philip Esformes on the Penn basketball team, according to reports. Bowman was a Penn assistant for six seasons.

Allen's testimony was during a Medicare fraud case involving Esformes, but unrelated to the college admissions bribery case that was announced Tuesday. Esformes is on trial in Miami for an alleged scheme that included falsely billing Medicare for $1 billion.

Now an assistant with the Boston Celtics, Allen pleaded guilty last year to accepting about $18,000 in bribes from Esformes while at Penn. He testified that he received about $300,000 in bribes.

Pearl said Tuesday that "we and our administration are gathering facts" on the situation. He declined to answer questions on the allegations against Bowman.

The Tigers open SEC Tournament play Thursday against the Missouri-Georgia winner before heading to the NCAA Tournament.

an hour ago
By Aaron Beard 7 hrs ago
By Richard J. Marcus 12 hrs ago
By Tommy Conmy 13 hrs ago
By Eric Olson 21 hrs ago