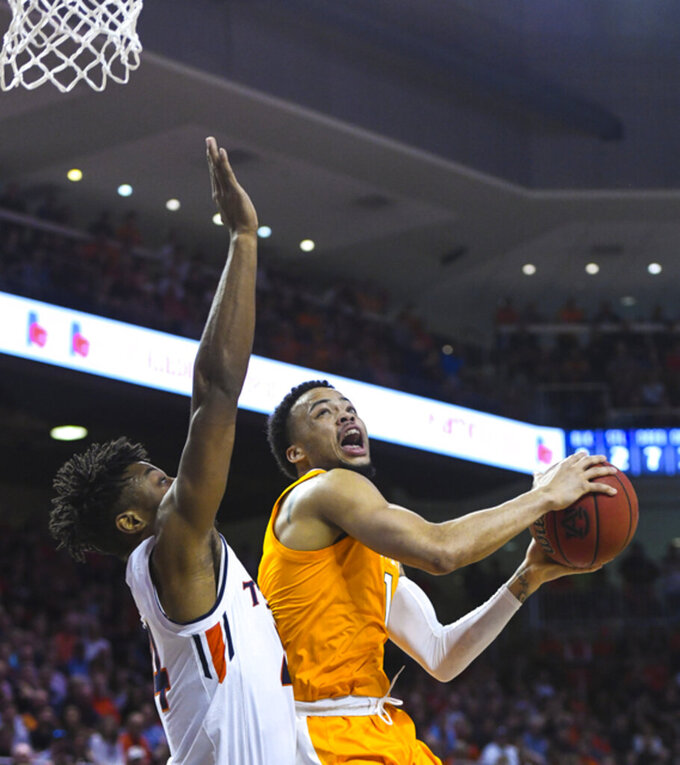 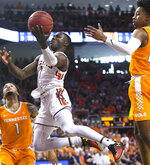 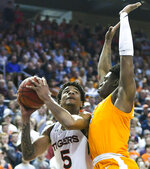 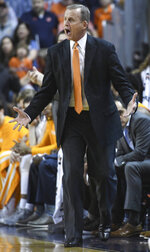 AUBURN, Ala. (AP) — The Auburn Tigers saved their best for last, and so did Jared Harper.

Harper made four straight free throws over the final 31 seconds and two late 3-pointers to help Auburn clinch an 84-80 victory over No. 5 Tennessee on Saturday in the regular-season finale.

The Tigers (22-9, 11-7 Southeastern Conference) collected their fourth straight win and biggest of the season in a packed Auburn Arena. It was Auburn's first win over a Top 5 team since beating Arkansas in 1995.

The Volunteers (27-4, 15-3) could have clinched at least a share of the SEC regular-season title with a win but No. 10 LSU claimed the championship outright with a win over Vanderbilt. They have never won back-to-back SEC championships, and will be the No. 3 seed in the league tournament.

"A year ago, you think about it, we win the league with five losses," Tennessee coach Rick Barnes said. "This year we only have three. You have to learn from this. Some of the mistakes we made today, we can't make. Not at this time of year."

The two teams shared the SEC regular-season title last year and Auburn spent six weeks ranked in the Top 10 before falling from the rankings.

Auburn relished the spoiler role this time. The Tigers will be the No. 5 SEC seed and receive a first-round bye in the league tournament.

Auburn's Samir Doughty grabbed the ball after Grant Williams' shot was blocked and made a 3-pointer to beat the shot clock. Harper hit two free throws with 31 seconds left for an 80-74 cushion, and Jordan Bone's 3-point attempt at the other end didn't fall.

Williams got the rebound and drew a Flagrant 1 foul from Anfernee McLemore. Williams made two free throws with 23 seconds left and the Vols got another possession. Williams launched a quick basket off the inbounds play.

But Harper hit two more free throws with 20 seconds left for an 82-78 lead. He had sealed Tuesday night's 66-60 win at Alabama with two late drives to the basket.

"He just has had four great games," Pearl said. "In many ways, put the team on his back, accepting the responsibility of a quarterback to have to make plays. He's been exceptional."

Bone then missed a 3-point try and teammate Jordan Bowden couldn't control the rebound, which went out of bounds.

Doughty hit two more foul shots for the Tigers. They celebrated moments later, with Bryce Brown climbing on the press row table in front of the student section after his final home game.

Chuma Okeke led Auburn with 22 points, one shy of his career high. Harper had 16 points and eight assists, with his only two 3-pointers coming back to back in the final minutes.

Williams finished with 25 points and nine rebounds for the Vols. Bone had 17 and Bowden 16. Admiral Schofield scored 13 before fouling out.

"We won the game, Tennessee didn't lose it," Pearl said. "We won the basketball game because of the quality of our play."

Tennessee: A 28th victory would have tied for second-most in program history. The Vols' four losses have come by a combined 15 points. They outrebounded Auburn 39-27.

Auburn: Finished regular season 2-5 against ranked opponents. Had perhaps its best all-around performances of the season, committing only five turnovers.

Harper's second 3-pointer in the final minutes appeared to have been tipped in by McLemore.

"It should have been a two-point play," Barnes said. "That's what everybody's told me since I walked in."

He didn't get any argument from Harper. "I thought Anfernee tipped that in, honestly," the Tigers point guard said.

Tennessee gets a double bye before opening SEC tournament play in Nashville, Tennessee.

Auburn opens the SEC tournament Thursday against the Missouri-Georgia winner.