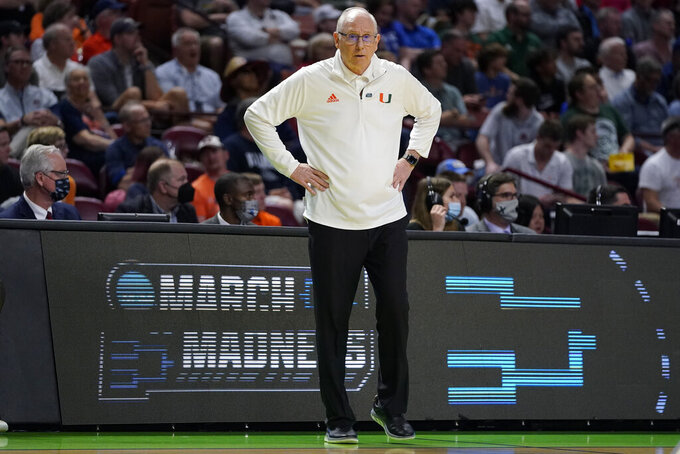 Miami head coach Jim Larrañaga watches during the second half of a college basketball game against Southern California in the first round of the NCAA tournament on Friday, March 18, 2022, in Greenville, S.C. (AP Photo/Chris Carlson)

GREENVILLE, S.C. (AP) — It's Auburn's young roster of future NBA players against Miami's older, small-ball attack for a spot in the Sweet 16.

The second-seeded Tigers (28-5) and its duo down low in 6-foot-10 Jabari Smith and 7-1 Walker Kessler will try to put on another dominant show Sunday night when they face the 10th-seeded Hurricanes (24-10) for a spot in the Midwest Region semifinals in Chicago next week.

Third-seeded Wisconsin (25-7) will take on 11th-seeded Iowa State (21-12) in Milwaukee, Wisconsin, Sunday with the winner facing either Auburn or Miami next week.

Smith, the Southeastern Conference freshman of the year, is a consensus NBA lottery pick — maybe No. 1 overall — should he turn pro. Kessler is considered a lower first-rounder after leading the country with nearly five blocked shots a game this season.

Miami coach Jim Larranaga compared Smith to NBA superstar Kevin Durant. Paired with Kessler, they are “a one-two punch that most teams just don’t have,” the coach said.

There are not many teams with Miami's experience. The Hurricanes have six players with four or more years playing college hoops, including three sixth-year “super seniors” in the starting lineup.

Auburn coach Bruce Pearl is grateful for his skilled young players, yet vexed about Miami's old-school knowledge heading into the most important game of the year.

Close, Coach. Miami's Charlie Moore is 24 and at his fourth stop of his college basketball journey. He began at California, spent two years at Kansas until moving on to DePaul and, this past offseason, the Hurricanes.

Moore had perhaps his biggest moment in the opening round, hitting two free throws with three seconds left for a 68-66 victory over seventh-seeded Southern California on Friday.

The Trojans were big, fast and skilled, much like Auburn. No matter. Miami will rely on what brought it to the NCAAs in the first place.

“Charlie is for us what Chris Paul was for Wake Forest,” Miami guard Kameron McGusty said. “He's our quarterback.”

Larranaga understood before the season he'd have to adjust his offense — “We do not have a back-to-the-basket player,” he said — to his personnel. When Moore came in, Larranaga knew he'd found the guy to direct the transition offense necessary to compete with opponents loaded with taller players.

“We handed him the ball and said, ‘Lead us,’” the coach recalled.

Moore and McGusty rescued Miami in the opening round after leading scorer Isaiah Wong had fouled out of a one-point game with just more than two minutes left. McGusty scored five straight points before Moore's winning foul shots.

“We haven’t seen a team like this in a while, but we're a team that plays defense,” Auburn guard Zep Jasper said. “We hang our heads high on defense.”

Auburn also hangs its head high on Smith, Kessler and its inside game.

Smith had 20 points and 14 rebounds in an 80-61 first-round win over Jacksonville State. He also had one-handed dunk that brought the house down and sent his teammates into hysterics.

“I told him you look like LeBron out there today,” Auburn guard Wendell Green Jr. said of Smith's jam.

Smith got several texts and calls about the jam, including one from his father, Jabari Smith Sr., a former LSU forward who played professionally in the NBA and overseas.

“He said it wasn’t better than his dunk at LSU, but he said he was real impressed by it,” the younger Smith said.

Less impressed — or at least not wanting to heap too much praise on Smith — were Miami's players.

“Yeah, we saw it,” Miami guard Jordan Miller said. “It was a good basketball play.”

Hurricanes forward Sam Waardenburg, at 6-10, is the tallest in the team's regular rotation. He said they've regularly faced talented, athletic players like Smith in the Atlantic Coast Conference.

In Milwaukee, Wisconsin held off Colgate for a 67-60 win in the first round on Friday. The Badgers played in front of raucous red-clad supporters who only had to drive 90 minutes or so to watch.

The same could be true next week at Chicago's United Center, which is only about about an hour longer drive from Wisconsin's campus in Madison.

Badgers All-American Johnny Davis is not worried about what might be, only about what he's got ahead of him in second-round opponent Iowa State.

He said the team wasn't "worried about playing next week at all,” adding: “We've got to focus on Sunday.”

The Cyclones outlasted sixth-seeded LSU 59-54 on Friday night to advance.