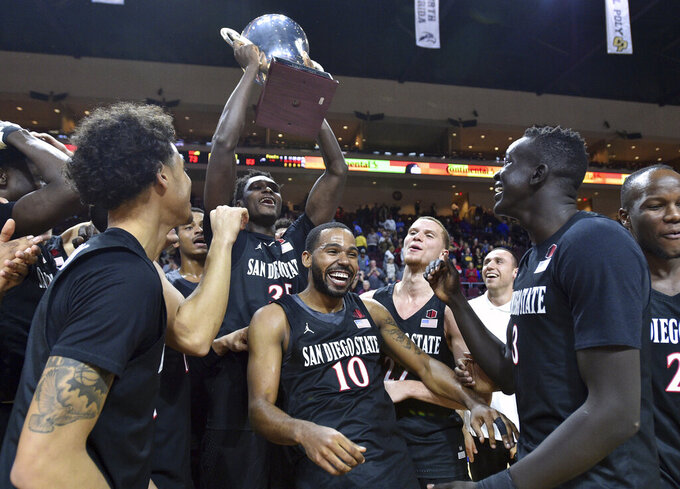 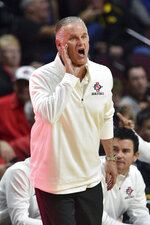 SAN DIEGO (AP) — Brian Dutcher's San Diego State Aztecs might be on their way to another special season.

The Aztecs are 8-0 heading into Mountain West Conference play, their best start since Kawhi Leonard led them to a 20-0 start and a 34-3 record in 2010-11, when they made their first appearance in the Sweet 16.

Dutcher and the Aztecs — led by transfers Malachi Flynn, Yanni Wetzell and KJ Feagin — say it’s far too soon to make any comparisons with that team, which was the highlight of the Steve Fisher Era.

“If we get to 20-0 then we can compare them,” said Dutcher, who was a long-time assistant to Fisher and is now in his third season as head coach. “That team started 20-0, which was unbelievable and was ranked in the Top 5. We’ve got a long ways to go there. If we continue to win, you know a month from now, if we happen to find a way to get five victories and all of a sudden we’re 13-0, then momentum is building. But right now it’s probably way too early to talk in terms of that team.”

His players, coming off a huge comeback victory against Iowa to win the Las Vegas Invitational, agree.

“It’s cool to have that I guess but you can’t get too big-headed. That’s how you end up losing to teams you shouldn’t,” said Flynn, a junior guard who transferred from Washington State.

“You’ve got to live in the moment and accept it and know that that happened but know that you’re not finished yet,” said junior forward Matt Mitchell. “We’ve only had eight games in the season, so by all means our job isn’t done.”

On the cusp of breaking into The Associated Press Top 25, the Aztecs are focused on the Mountain West Conference schedule, which is often perilous because of tough travel and playing at altitude. The Aztecs’ conference opener is Wednesday night against Colorado State at Fort Collins, elevation 5,003 feet.

The conference schedule starts earlier this year because the postseason tournament was moved up one week.

SDSU still has three nonconference games this month, including against Utah of the Pac-12 Conference at Staples Center in Los Angeles on Dec. 21.

Utah is the fourth big game the Aztecs have targeted as needing to win to help land an at-large NCAA Tournament berth in case they don’t win the postseason league tournament, which comes with an automatic bid.

The Aztecs have already beaten BYU on the road and Creighton and Iowa at Las Vegas. They’ve been sharing the ball better than in past seasons and are relying on veterans.

“We’ve seen that this team has a certain amount of grit to it, coming down from nine points behind at BYU, coming from 16 down against Iowa on a neutral” court, Dutcher said. “We seem to have a level of mental toughness where we can withstand a team’s pretty good punch and hang with the game plan, keep defending and find our way to the victory. This team has shown it can do that, which is a good sign for this year.”

That hasn’t always been the case in recent seasons.

The Aztecs are so deep that Dutcher laments not be able to get freshman forward Keshad Johnson — “who could be one of the better players we’ve ever had here” — on the court.

“It shows the importance of having some experience on the floor that our talented freshman can’t crack into any minutes right now,” Dutcher said.

Rallying from a 16-point first-half deficit to beat Iowa showed the Aztecs’ mindset.

“I think we just trust each other,” said Flynn, who scored all his 28 points in the second half. “We knew we weren’t playing too well when were down 16. We had a lot of time to turn it around. Nobody really panicked. We just chipped away, and we ended up taking the lead and then we never looked back.”

The transfers have made a huge difference. Wetzell (Vanderbilt) and Feagin (Santa Clara) are graduate transfers.

“You’ve all got to come in with the same mindset. With us it was winning,” Flynn said. “We all wanted to win coming here. We came with an open mind, open to new roles or whatever the case may be and so far it’s working out well.”

Mitchell has been impressed.

“These guys have come in with open minds and are willing to work. They’re all great guys on and off the court,” he said. “Most importantly, they want to win. Best way to do that is to play as a team. They came in and followed suit in what we planned in the summer and now we’re watching everything unfold.”