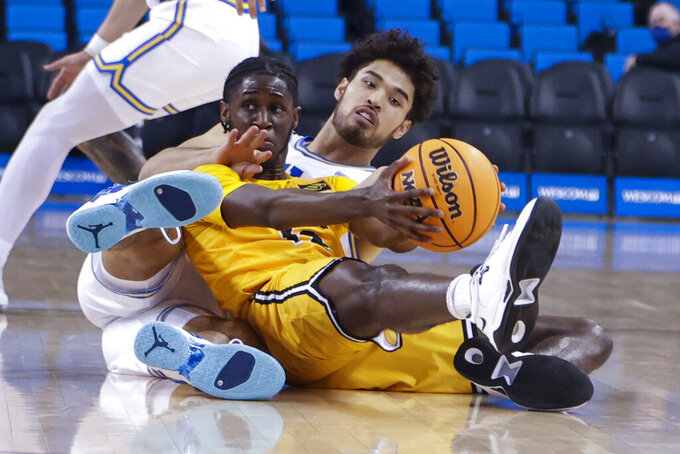 LOS ANGELES (AP) — Early on, fifth-ranked UCLA looked out of sorts in its return from a 25-day absence caused by COVID-19.

Johnny Juzang, an 87% free-throw shooter, missed his first two at the line. The Bruins missed eight of nine field-goal attempts soon after.

But, eventually, they settled in and the rout was on in a 96-78 victory over Long Beach State on Thursday night. Jules Bernard scored 22 points and Juzang added 18.

“We were desperate to get back on the court,” UCLA coach Mick Cronin said. “You got to start playing games. You can only simulate so much in practice.”

The Bruins (9-1) hadn't played since winning at Marquette on Dec. 11. Since then, they had three games canceled and three postponed because of COVID-19 issues among themselves or their opponents.

Bernard's points matched his season high from the first game against the Beach and his four 3-pointers tied his career best.

“It's like the start of another season,” said Juzang, who said he didn't get COVID-19 — one of three scholarship players who weren't infected.

UCLA's return wasn't without cost. Second-leading scorer Jaime Jaquez Jr. sprained his right ankle with 1:56 remaining in the first half. He watched the rest of the game from the bench with his ankle heavily wrapped.

The general public was barred from the hastily arranged game between two teams that already met this season. The Beach were beaten 100-79 at Pauley Pavilion on Nov. 15, when Bernard and Juzang combined for 47 points. In the rematch, they totaled 40.

The Beach itself ended a 23-game hiatus on Wednesday with a 90-64 victory over Westcliff, the team's first game since Dec. 12. The Beach had six straight games canceled because of COVID-19.

Jadon Jones scored a career-high 27 points for the Beach (4-8), and was their only player in double figures.

Long Beach State shot better in the second half, but couldn't slow UCLA's offense. The Bruins built their largest lead of the game, 69-46, on consecutive 3-pointers by Bernard and Jaylen Clark, his first of the season.

The Beach took the lead to start the game before UCLA ran off 11 straight points, bookended by 3-pointers from Tyger Campbell and Juzang. It was part of a 34-14 spurt that ended the half with UCLA leading 45-29.

“Having the game itself was so valuable,” Beach coach Dan Monson said, “and then to have adversity and get behind and keep fighting, I thought we grew mentally a lot. Some of these games, it’s easy to let those get away, and I thought our guys fought and tried to stay together a lot better than they did the first time we were here.”

The only spectators allowed were family of the players and it appeared between 75 and 100 people were on hand, most sitting in the upper level. UCLA pumped fake crowd noise into the arena and the Beach's bench chanted and clapped at times.

“We miss the fans, so hopefully we're going to get them back," Juzang said. “It makes a huge difference.”

The game also marked the long-awaited return of starting forward Cody Riley, who sprained his left MCL four minutes into the Bruins' season opener on Nov. 4. He scored the team's first basket and finished with eight points, two rebounds and three fouls in 20 minutes.

“He’s got to get his legs back,” Cronin said. “He had a lot of good flashes but he was huffing and puffing at times.”

Cronin thanked Long Beach State for switching its game against Westcliff to a night earlier to accommodate the Bruins. He said it guaranteed the Beach a date on the Bruins' schedule next season.

The Bruins faced the same nonconference opponent in the same season for the first time since 1982-83. Last season’s matchup between the teams was rescheduled and canceled multiple times because of the coronavirus.

Long Beach State: The Beach are about to get into the heart of their Big West schedule, hosting three straight league games over the next week. The team's next several opponents are local and the Beach won't have to leave the greater LA area until Jan. 29 when they travel to UC Davis. “All of a sudden we have league coming, and we’re trying to get ready, and we don’t know if we’re ready because we haven’t played for six games,” Monson said.

UCLA: More than just a cliché in the age of COVID-19, the Bruins are taking things day by day. Oregon and Oregon State are scheduled to visit next week, but both are dealing with coronavirus issues. There are still games against Arizona, Arizona State and Stanford to be made up, too. If they can't play a Pac-12 opponent, the Bruins will be working the phones to line up another nonconference foe.

UCLA: At California on Saturday, with the Bruins trying to extend their eight-game winning streak against the Bears.