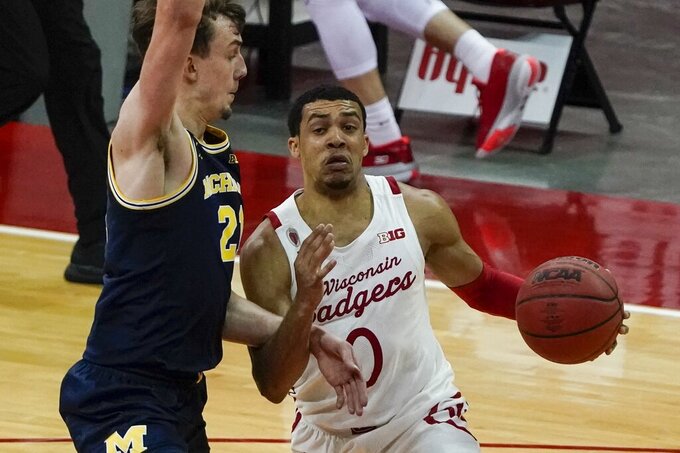 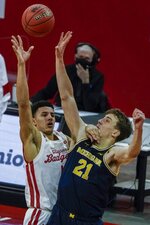 MADISON, Wis. (AP) — Michigan only needed 20 minutes or so to shake off the rust from a three-week layoff.

Isaiah Livers scored 20 points, Hunter Dickinson had 11 points and 15 rebounds, and the third-ranked Wolverines rallied from a 14-point deficit to beat No. 21 Wisconsin 67-59 on Sunday.

The Wolverines (14-1, 9-1 Big Ten) hadn’t played since a 70-53 victory at Purdue on Jan. 22. Michigan announced the next day it was pausing all athletic activities after several people linked to the athletic department tested positive for a COVID-19 variant that transmits at a higher rate.

“I was outside, I was doing jump-rope, I was doing everything necessary to stay in shape,” Livers said. “A lot of other guys were, too. We all had a program. We all stayed true to it, and obviously (you saw) the outcome. We’re getting back in our rhythm, back in that Michigan basketball rhythm.”

That was apparent down the stretch.

After trailing most of the way, Michigan scored the game’s final eight points. Wisconsin (15-7, 9-6) collected just six points and one basket over the final 7:45.

“We’re fit to play I think any kind of style — a fast-paced game, a slow-paced game, a grind-it-out game, whatever,” said Dickinson, who also had five blocks. “With our depth, I think we have the ability to do so much out there, win in so many different ways.”

Dickinson made numerous big plays with the game on the line.

Michigan trailed 57-56 when Dickinson got the offensive rebound off a missed 3-pointer from Eli Brooks and found Livers, who sank a 3-pointer with 2:48 left. D'Mitrik Trice tied the game by hitting two free throws, but Michigan pulled ahead for good on Dickinson's putback with 1:46 remaining.

Trice scored 16 points, Aleem Ford had 15 and Jonathan Davis had 11 for Wisconsin. Michigan's Franz Wagner had 10 of his 14 points in the second half.

Wisconsin led by as many as 14 in the first half and took a 39-27 lead into the locker room.

Wisconsin shot 53.8% overall and went 5 of 7 from 3-point range in the opening half against a Michigan team that came in holding opponents to 37.4% shooting, third best in Division I. Ford led the way by scoring 11 points in the first 8 1/2 minutes.

But the Badgers shot 7 of 28 in the second half and missed their last 11 3-point attempts.

Wisconsin led 42-32 early in the second half when Brad Davison drove to the basket and his elbow hit Michigan’s Mike Smith in the face. Michigan coach Juwan Howard showed his displeasure and wanted a flagrant foul called on the play — but the only call the Wolverines got was a technical foul against their bench.

Trice made one of the two ensuing free throws, but the incident fired up Michigan. Smith responded with a three-point play as Michigan began its comeback.

“We’re all family,” Howard said. “It just goes to show you. The family got tested and everybody banded like brothers for their family.”

Michigan: The Wolverines showed their toughness by the way they recovered from a slow start and dominated the game's final minutes. Michigan beat Wisconsin 77-54 on Jan. 12 and became the first team to sweep a regular-season series from the Badgers since 2017-18, when Michigan State and Nebraska both did it. The Badgers had won their last eight rematch games with teams that beat them earlier in the same season.

Wisconsin: The Badgers needed more from their starting five, who combined to score 10 points and shoot 2 of 16 in the second half. They also didn't get enough from their big men. Neither 6-foot-11 forward Nate Reuvers nor 6-10 forward Micah Potter had a single rebound.

Michigan figures to stay at No. 3 when the AP Top 25 comes out Monday. Wisconsin could fall a couple of spots.

Michigan hosts No. 25 Rutgers on Thursday.

Wisconsin hosts No. 15 Iowa on Thursday.