Back in Top 25, Georgia eager to reclaim national prominence 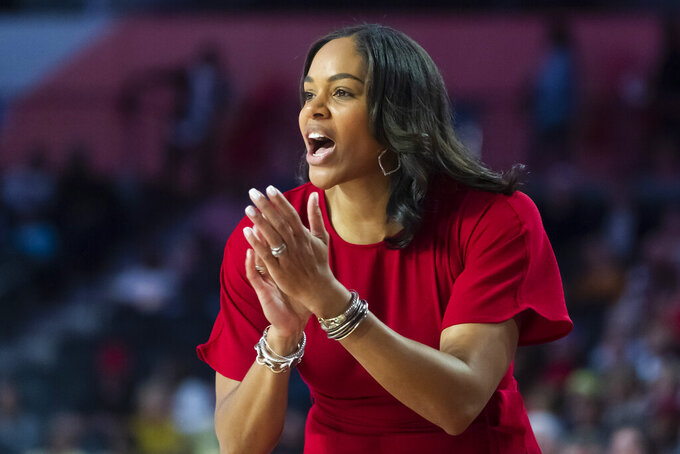 File-This Nov. 17, 2019, file photo shows Georgia coach Joni Taylor shouting to players during an NCAA women's basketball game against Georgia Tech in Athens, Ga. The Georgia Lady Bulldogs are back in the Top 25. “That’s a part of Georgia basketball. That’s the expectation,” coach Joni Taylor said Tuesday. "You can't walk into the building and not be reminded of who we are, the program's history, and what we're trying to carve out in terms of women's basketball. That's a huge motivator for me, my entire staff, and all the ladies we bring in to play here.” (AP Photo/John Amis, File)

The Georgia Lady Bulldogs are back in the Top 25.

Now, the challenge is to stay there for a while.

Climbing back into the rankings for the first time since in two seasons, No. 22 Georgia (12-1, 4-1 Southeastern Conference) is eager to reclaim its place among the nation's elite programs.

“That’s a part of Georgia basketball. That’s the expectation,” coach Joni Taylor said Tuesday. "You can't walk into the building and not be reminded of who we are, the program's history, and what we're trying to carve out in terms of women's basketball. That's a huge motivator for me, my entire staff and all the ladies we bring in to play here.”

Those goals will be challenged right away.

Georgia plays at No. 4 South Carolina (10-1, 5-0) on Thursday in the makeup of a game that was initially set for Jan. 7 before the Gamecocks were hit with a COVID-19 outbreak.

“That's the SEC,” Taylor said. “You can go on and on down the schedule. We've not done anything yet. Yeah, we've won a game here and there, but we're still climbing the mountain.”

The Lady Bulldogs were a perennial powerhouse under longtime coach Andy Landers, who took the team to the NCAA Tournament 31 times over a 33-year stretch. He reached the Final Four five times and the national championship game twice with a glittering array of stars that included Teresa Edwards, Katrina McClain and Saudia Roundtree.

The only thing missing from his resume was a national title.

Landers retired in 2015 with a career record of 862–299, turning the program over to Taylor, who had been his top assistant.

While Georgia has had some success over Taylor's first five seasons, most notably a 26-7 mark in 2017-18, the Lady Bulldogs have made only two NCAA Tournament appearances and managed just a single postseason victory.

Taylor feels like they're ready to turn the corner.

“Year six may seem like a long time, but in the cycle of recruiting it's not a long time at all,” she said. “We were very intentional about who we wanted to bring into our program. We know what we want to look like, and we're not going to settle for anything that takes us away from that. This year, you're finally seeing a glimpse of what our vision is and how we want to play basketball.”

Most notably, Georgia is a much deeper team than it was early in Taylor's tenure.

“We have so many people who can make an impact on the game,” Staiti said. “You don't know who it's going to be on any given night. We have so many weapons, so many things we can throw at people. ”

That was certainly Taylor's intention when it came to rebuilding the program.

“It's not on the shoulders of any one or two people to carry the day for us,” the coach said. “When we sub someone in, there's not a drop-off at all.”

Coming off a victory at then-No. 23 Tennessee, Georgia will now get a chance to see how it matches up with one of the nation's most dominant programs.

Dawn Staley guided the Gamecocks to the national championship in 2017 and they would've been one of the favorites last season, posting a record of 32-1 that included a perfect run through the SEC before COVID-19 forced a postponement of the NCAA Tournament.

South Carolina routed the Lady Bulldogs in their two meetings a year ago, winning 88-53 in Athens and 89-56 in the SEC Tournament.

Georgia is eager to prove that it's closing the gap on teams such as the Gamecocks — the sort of national company the Lady Bulldogs used to keep.

“This is my home state," Staiti said. “Getting Georgia back on the map, getting us back to where we're supposed to be, that's important to me.”